5 Interesting Facts About The Greek Language 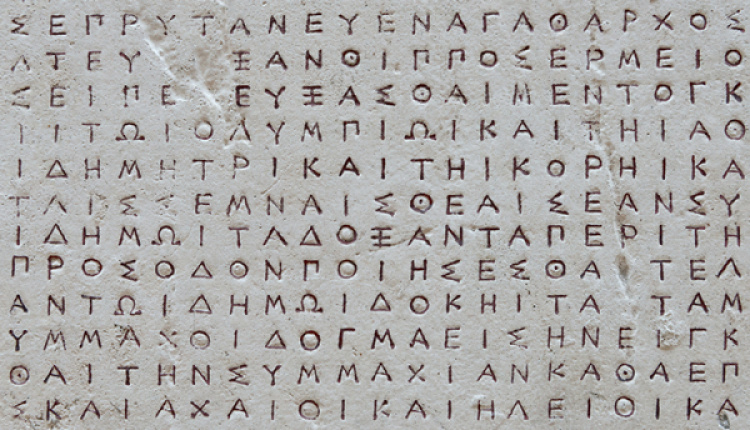 Here are 5 surprising facts about the Greek language you may have never heard of:

1. The Longest Word In Literature is Greek
According to the Guinness World Records, the longest word ever to appear in literature can be found in Assemblywomen, a comedy written by the Greek playwright Aristophanes.

or, in the Greek alphabet:
λοπαδο­τεμαχο­σελαχο­γαλεο­κρανιο­λειψανο­δριμυπο­τριμματο­σιλφιο­καραβομελιτο­κατα­κεχυμενο­κιχλεπικοσσυφοφαττο­περιστεραλεκτρυονοπτο­κεφαλλιο­κιγκλοπελειο­λαγῳοσιραιο­βαφητραγανο­πτερύγων

It is the longest Greek word, with 183 letters and 78 syllables.

Greek is the oldest recorded living language with written records in Greek spanning over 34 centuries. Greek derives from Proto-Greek, the first form of spoken Greek which dates back to the 3rd millennium BC. The language later evolved into Ancient Greek, which was spoken during the Antiquity, while Modern Greek emerged after the fall of the Byzantine Empire in 1453.

3. Originally, Greek Was Written From Right To Left

Like modern-day Hebrew and Arabic, Ancient Greek was written from right to left. Subsequently, Greek was written boustrophedon, meaning that lines alternated between right-to-left and left-to-right script. During the 5th century BC, the direction of Greek writing was standardized as left to right, and all the letters adopted a fixed right-facing orientation.

4. The Word ‘Alphabet’ Derives From The 2 First Letters Of The Greek Alphabet

The first two letters of the Greek alphabet are alpha (α) and beta (β). And while the English language uses Latin characters, the word ‘alphabet’ actually refers to Greek letters.

5. An Estimated 12% Of The English Vocabulary Has A Greek Origin

Did you know that almost every English word starting with ph such as philosophy, philanthropy, phobia, and phenomenon, comes from Greek? Greek hugely influenced the English language that is why many technical and scientific terms such as astronomy, biology, and mathematics, originate from Greek.