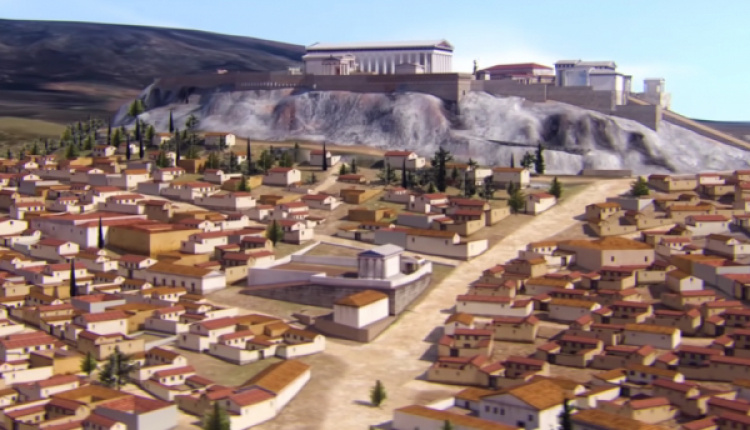 Developed as a hobby project in 2008 by Athens-based visual effects artist Dimitris Tsalkanis, the Ancient Athens 3D website presents a series of digital reconstructions of the city through time, from the Mycenaean Bronze Age (1600 BC) to the Early Modern period (AD 1833).

The project’s latest video, launched in November, showcases Classical Athens at the height of its power in the late 5th century BC, in the years before its defeat by Sparta and their allies in the Peloponnesian War (431-404 BC).

The 12-minute video, rendered in spectacular detail, takes the viewer on a fly-through of the city’s neighborhoods, circling its famous monuments, temples, civic buildings, and marketplaces. Each monument is accompanied by a short description.

The 5th century BC was a time of unparalleled change in the history of Athens. Partly destroyed by the invading Persian army in the years 480-479 BC, the extensive rebuilding program that ensued, accelerated by the great statesman and general Pericles in the second half of the century, made it the center of the Greek world.

During this period, dubbed the “Golden Age of Pericles,” the arts, sciences, and philosophy flourished in Athens, laying the cultural and political foundations of Western civilization.

Ancient Athens 3D was developed to present photorealistic digital reconstructions of the city and all of its monuments from 1600 BC to AD 1830. The project began with the first experimental 3D models of the Acropolis and the Ancient Agora, based on published archaeological and architectural data from scientific journals.

As the digital technology evolved, further reconstructions were added, and the site’s popularity grew. Great attention has been given to historical and archaeological accuracy in each of the videos, successfully communicating the development of urban planning through the ages.

In his work, Dimitris Tsalkanis has collaborated on projects with the Greek Ministry of Culture and Sports, as well as museums and local municipalities. His 3D reconstructions offer a superb educational platform, bringing ancient Athens to life for a wide range of audiences, from school children to academic researchers.
For more information about these projects, visit the Digital Heritage Creations website.
Originally published on: greece-is.com