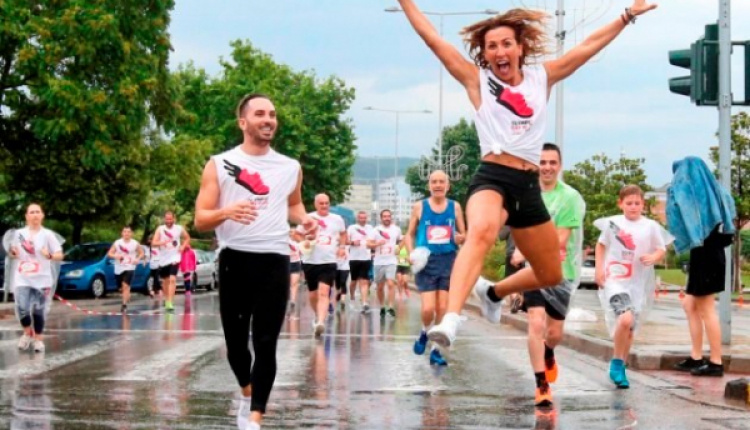 The Unique Olympic Road Running Race returns with a magnificent sports, cultural, tourist and covid-safe Olympic event spreading a message of global solidarity, unity and hope for a brighter future.

The 4th "Olympic Day Run" Greece, the only Olympic Road Running Race in the country, which is organized under the auspices of the International Olympic Committee to celebrate the International Olympic Day bearing the hallmark of the Olympic cycles, is fast approaching. The entire Olympic family has set its appointment at the event’s starting line, on Sunday, September 26, 2021, in Thessaloniki.

Olympians, Paralympians, distinguished athletes and coaches, sports clubs and associations from all over the country, as well as active citizens, will meet at the starting line for the supreme Olympic road running event of the country, People of all ages will join their steps honoring the Olympic spirit and ‘fair play’ by spreading a message of global solidarity, unity and hope for a brighter future. This year, the Olympic Day Run GREECE joins forces with “The Smile of the Child” in order to offer more smiles to children who need it. With every registration in the social contribution packages of the 10, 5 or 2 km races, you offer 3 euros to the Organization’s continuous effort so that all children can have everything they deserve and are entitled to.

The 4th Olympic Day Run Greece promises a covid-safe experience, with a health & safety protocol approved by the Health Committee of the General Secretariat of Sports and the responsible health bodies. The races’ approved health protocol gives the right to runners over 12 years old to take part. All participants must provide a vaccination certificate or a recovery certificate up to 15 days before receiving their participation kits from the Registration Center or a 48-hours negative rapid test or a negative 72-hours PCR test. For unvaccinated children 12-16 years old, a negative 24-hours self-test must be provided before the event.

All finishers will receive a commemorative medal and a commemorative certificate of participation by the International Olympic Committee, while the winners will receive special prizes of the 4th "Olympic Day Run” Greece.
The “Olympic Day Run” Greece, the certified Race by AIMS, Association of International Marathons and Distance Races, will start at 18:00 in the afternoon with the 10km running race. At 19:30 the 5km race will follow, while the event’s schedule will be completed at 21:00 with the 2km road running race of social contribution and dynamic walking. All routes have a starting and finishing point on Alexander the Great Avenue (at the height of the "Umbrella" sculpture).

Vacation Tourist Packages – Acquaintance with the country’s Olympic history
“Olympic Day Run” Greece offers a unique sports tourism experience. In collaboration with “Greece on the Go” the event suggests 2-7 days tourist accommodation packages, to get acquainted with Greece’s culture. At the same time, the “Grand Tour”, the race’s special vacation package which includes tours in archeological sites promises the acquaintance with the country’s Olympic history. For more information you may visit the websites of olympicdayrun.gr and greeceonthego.gr.


Special jewelry line inspired by the Olympic spirit
For the first time, Olympic Day Run Greece introduces a new line of jewelry specially designed and inspired by the Olympic spirit. The “ANATASIS” limited edition jewelry series has been designed by the jewelry artist Sofia Zarari. Inspired by the Olympic Idea’s values ​​and ideals, the “Anatasis” jewelry collection is the artistic expression of collaboration and inspiration between Sofia Zarari and the Olympic Museum. At this time of critical juncture for all humanity, the glorified way of life that Olympism promotes through the principles of peace, tolerance, fair play, sportsmanship, is an imperative need for society, so that all people can coexist peacefully. Values ​​that on an individual and collective level strengthen the spirit and elevate the soul. For more information about the collection, you may visit olympicdayrun.gr.

The 4th Olympic Day Run GREECE is organized by the Hellenic Olympic Committee, the International Olympic Academy, the Municipality of Thessaloniki, the Olympic Museum, the Hellenic Olympians Association, SEGAS and EAS SEGAS Thessaloniki and DKO OLYMPiA  with the participation of Olympians, Paralympians, Distinguished Athletes, Sports Clubs and Institutional Bodies from all over the country, with the support of the Hellenic Olympic Academy, the Hellenic Olympic Winners Association, the Greek Paralympians Association, the Region of Central Macedonia and Thessaloniki International Fair-HELEXPO. The event is held under the auspices of the Hellenic National Commission for Unesco, the Ministry of Interior of the Macedonia-Thrace Sector, the General Secretariat of Sports, and the Municipalities of Ampelokipi-Menemeni, Thermi, Kalamaria, Kordelio-Evosmos, Neapoli-Sykies, Pavlos Melas, Pylaia-Chortiatis, Volvi, Delta, Thermaikos, Lagadas, Chalkidona, Oreokastro, Almopia, Aristotelis, Dion-Olympos, Emmanuel Pappas, Iraklia, Kavala, Kassandra, Kilkis, Naoussa, Polygyros, Serres and Skydra.

The Olympic Museum and Olympic Day Run Gold Sponsor, PROTERGIA, the Grand Sponsor, Ethniki Asfalistiki, the Race’s Silver Sponsors, Thessaloniki Transport Authority (OSETH) and Alumil, the Bronze Sponsors, Masoutis and Evlogimeno, the Sponsor, Goulidis, the Supply Sponsors, Athos, Dole and Red Bull, the hospitality sponsor Grand Hotel Palace, the Transportation Sponsor, EcoCar, the Equipment Sponsor, Thessaloniki Tourism Organization and the event’s Tourist Support Agency, Greece on the Go, they all serve the vision of Olympism and offer their kind assistance for the implementation of the project. Moreover, they contribute to the country’s promotion on the Olympic world map, as well as to the dissemination of the Olympic values ​​to a better future.

The Olympic Day Run’s ultimate Olympic experience is waiting for you!