Wooden Eco-Bike, Made In Greece 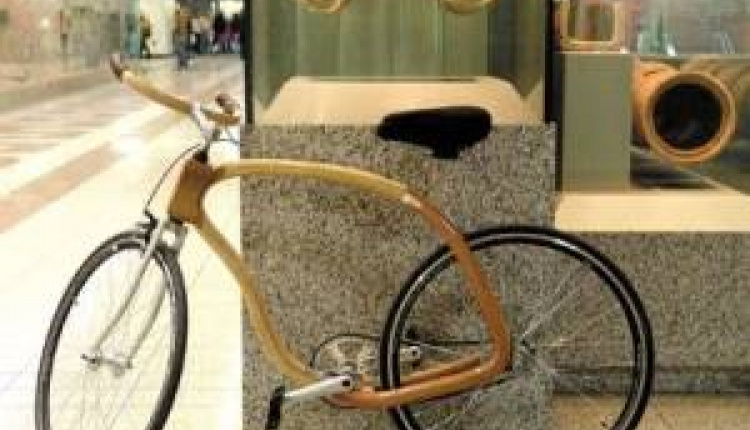 Kostas Koutrakis has been working with the wood since he was 12; the culmination of his carpentry career is a fully functional wooden eco-bike that's nice to ride. His career began in 1969, when he started off as a cabinetmaker, producing furniture for customers.

A cheerful and energetic character, Kostas Koutrakis doesn't look a day of 60. Only his hands betray his love for wood and the tools of his trade. His career began in 1969, when he started off as a cabinetmaker, producing furniture on order for customers. He's also tried his hand at musical instruments, making three guitars. And he's dabbles in art, gifting his paintings to friends if they like them.

But now he's into making wooden bikes, rolling his first model out of his workshop in 2012, following a challenge from a friend.

"If you're that skilled, make a bike," she said and Koutrakis duly produced one, without much bother. But he wasn't pleased with the prototype and the fall-off in his specialised carpentry business as a result of the crisis gave him the time he needed to perfect it.

The carpenter, who is based in the eastern Attican town of Gerakas, came up with a new shape for the frame, which is made by gluing thin wooden strips of chestnut, beach and walnut together.

The fruits of his labour are a beautiful, varnished, no-gear bike, weighing only 13kg and which he insists is more flexible and just as sturdy as a metal equivalent.

It created a sensation when he wheeled it out in public. Taking it for a spin to Syntagma Square last December, everyone wanted to know where he had bought it.

"Every Friday, I do about 70km with a cyclists group called Freeday. Some of the others remark that my bike is so so nice that, apart from wanting to take it for a spin, they'd like to hang it up in their living room as a decoration," he says.

Koutrakis, who is working on five orders, is now designing models for women and children and is thinking of ways to get his bikes into foreign markets, like Holland where cyclists rule the streets.

To read the rest of the article, please visit enetenglish.gr