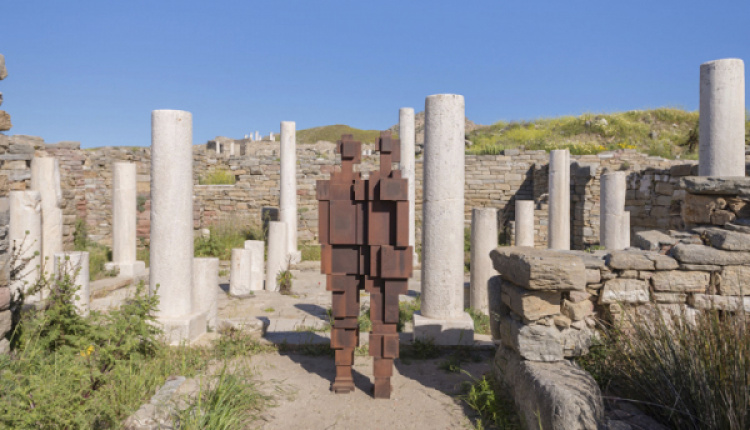 Delos is ancient Greece's most sacred island and one of the most visited archaeological sites in the country. The legacy of Delos is inversely proportional to its size; in fact, the tiny island is barely 5km long by 1.5km wide. Apart from being the birthplace of the ancient gods Apollo and Artemis, it was also one of the greatest ancient Greek sanctuaries.

Today, remarkably preserved ancient remains such as votive offerings, sculptures, and temples stand next to relics from the period when Delos was an important commercial center, attracting thousands of visitors each year!

It is on this unspoilt island that Greek authorities have undertaken an exciting and ambitious experiment. Sir Anthony Gormley, the famous British sculptor, has placed 'inhabitants' back on Delos. He has created 29 iron 'bodyforms', that are to be the first artworks to be erected on Delos since it was populated–more than 5,000 years ago!

"If this works, our hope is it will help change how people approach ancient monuments," says Dr Demetrios Athanasoulis, who heads the department of antiquities in the Cyclades. "There is no past without the present, and we live in times where there are any number of windows through which to view the past."

Before visitors even disembark from the ferry from Mykonos, they are greeted by one of Gormley's 'bodyforms'. On a rock at the water's edge stands a mysterious, lonesome figure, gazing toward the horizon. The invitation to exhibit his work in a place where no artist has set foot for thousands of years was both "an amazing privilege and extraordinary responsibility", "It's been a huge challenge but what a place to think about the human project," he says.

For Dr Athanasoulis, only time will tell whether the experiment has worked. "It's only natural that some won't like what they see in Sight," he quips. "It will end in October, and only then will we really know how successful this has been."