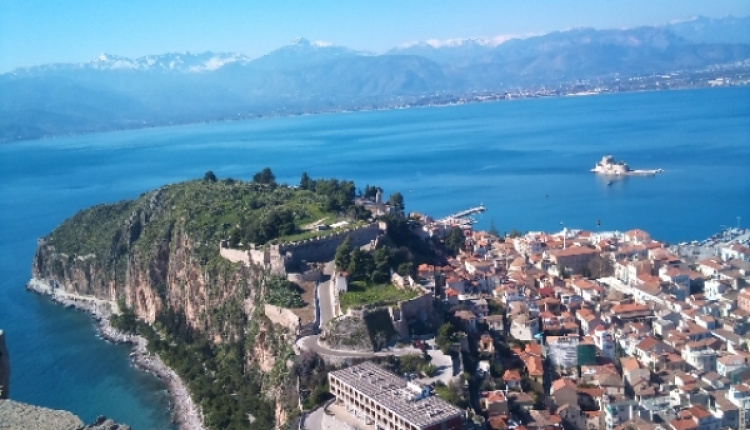 Let’s say you are visiting Greece and you don’t feel like going to the beach, probably because it’s not that warm any more or you’ve seen enough beaches so far. You’ve seen most of Athens and you have a couple of days to spend, two days full of history and beautiful landscapes. Then you just have to rent a car, get a map and history is all yours! First stop will be at Isthmus of Corinth (the Corinth Canal).

This man-made canal is the border between mainland Greece and Peloponnese. Ancient Greeks used to carry their ships through a narrow road in order to bypass this small part of land.

Following the direction to Tripolis, we make a turn when we see the sign Mycenae. In less than 2 hours from Athens lies the ancient city of Mycenae, one of the first empires in the ancient Greek times. You may have heard it from Iliad, the world famous epic poem by Homer. The king of Mycenae, Agamemnon, was considered to be the king of the kings in ancient Greece. His capital, the citadel of Mycenae, was one of the first organized cities, with high stone walls called Cyclopean Walls. Due to their huge size these walls are considered to have been built not by humans but by Cyclops. Enter the city by the Lion Gate. Also pay a visit to the Treasury of Atreus, a very famous and impressive “tholos” tomb. Same ticket applies for the citadel and the Treasury.

Heading to Nafplio, we make a stop to the Acropolis of Tiryns. It also used to be one of the well known citadels in ancient Greece – 2.000 years BC. Both Mycenae and Tiryns are included in UNESCO’s catalogue as Monuments of World Cultural Heritage.

Napflio is one of the most beautiful getaways from Athens. It was the first capital of Modern Greece. The old city is full of narrow roads, beautiful buildings, many hotels and restaurants. You can find low prices off-season. Pay a visit to the Rosary Museum (“Kompoloe” in Greek), a hidden gem in Napflio. If the weather is good, consider taking a boat to Bourtzi castle, a small castle in the middle of Napflion harbour. Enjoy a meal in one of the traditional tavernas in the old city of Nafplio. Try local, traditional and seasonal food like stuffed vegetables, fresh fish and salads. Nafplio is also famous for ice cream shops, some following famous gelato recipes directly from Italy.

Next day, after having a breakfast in the old city opposite to Bourtzi castle, it’s time to pay a visit to Epidaurus. It is located about half an hour from Nafplio. The archaeological site is full of surprises and history. Visit the Asklipeio, one of the most famous ancient ‘hospitals” – healing process for Greeks was a mixture between medicine, science and belief. The Asklipeio was considered to be the birthplace of Asclepius, the healer, god of medicine and healing.

The ancient theatre of Epidaurus is probably the most known ancient theatre of ancient Greece and is still in use. If it happens that you are around during summer, book a ticket to see a play in this really beautiful with perfect acoustic theatre. You may not understand the words, but you can feel them with your other senses. The spirit is still there.
Returning to Athens via the coastal road near the Saronic gulf, full of memories, pictures and ancient spirit, you may imagine how all these places created the foundation of modern civilization.

P.S.: Check the opening hours of the archaeological sites before visiting in order not to miss anything.