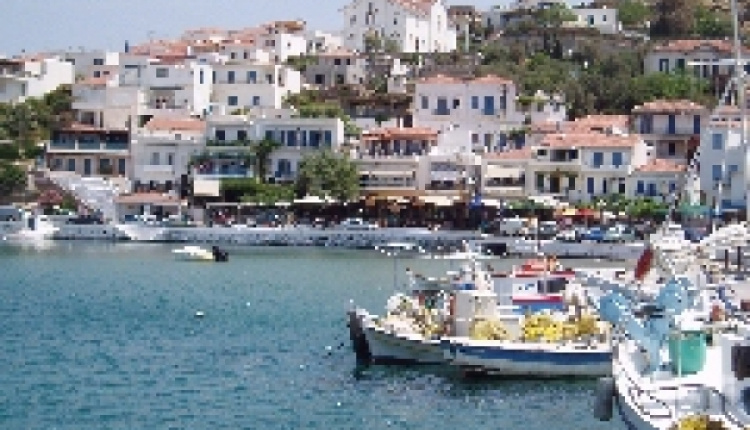 Andros is the northern- most island of the Cycladic isles. The islands of Kéa, Kýthnos, Sérifos and Sífnos can be seen as a natural continuation in the sea of the peninsula of Attika; in the same way, the nearby islands of Andros, Tínos and Mýkonos can be seen as the foothills of the mountain ridge of the island of Evia (Euboia).

Andros is mountainous and it is criss-crossed with a number of mountain ridges. All of these ridges run parallel to one another from southwest to northeast. Between the ridges there are deep valleys and sometimes steep gorges. The highest summits are the Kouvára (with the Profítis Ilías at 997 m) and the Pétalo (990 m), in the centre of the island, between the towns of Ano Aprovátou and Vourkotí. Because of this relief the north-south connections on the island are rather difficult. Except for the main coastal road, most of the roads thus run into the valleys, from the southwest of the island to the northeast.

Andros is a unique island for a number of different reasons. First of all, in comparison with many of the other Cycladic isles, there is a lot of water – and this thanks to the relative high amount of rainfall and the multitude of sources. As a result, some of the valleys are remarkably green. Especially the pine tree dominates the landscape (for instance in the neighbourhood of Ménites). There are also lots of remnants of watermills in the valleys of the Dipotámata (between the towns of Exo Vouní and Sinetí), in the valley of the Mégalo Révma (in the north), etc.

The second remarkable characteristic is the architecture of some of the villages, which is not really Cycladic. Andros is a very wealthy island and this is partly the result of generations of ship owners. The villages of Chóra and Steniés are therefore striking because of the large and wealthy houses. The red roofs resemble the Italian cities and also some Greek islands such as the island of Sími near Rhódos.