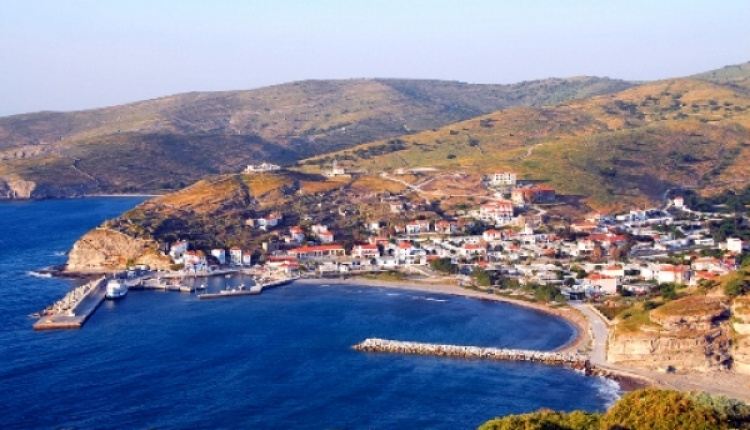 In the heart of the Northern Aegean Sea, there is Ayios Efstratios, a small island, ideal for a calm vacation amongst unspoiled nature. The landscape consists of beautiful beaches, sea caves, rare geological formations (due to the volcanic rock) and Oak forests. For this reason, the island along with the surrounding coastal region has been included in the European "Natura 2000" network. The island has an area of 44sq. km, a coastline of 30km and a population of 400 people.

The first traces of habitation go back to Prehistoric times. Ayios Efstratios was named after Saint Efstratios the Miracle-worker, who came from Vithynia during the Iconoclasm and became a hermit. The island was liberated in October 1912, and from 1928 until 1963, it was a place of exile for political prisoners. The 1968 earthquake altered the architectural features of the village. There are connections by boat to the ports of Lavrio and Limnos.

Agios Eftratios village, is the only one on the island, located on the North West side. The small harbour with a wonderful view of the sunset is suitable for fishing boats and small vessels. This is the departure point for trips to the Island's beaches.

Maraslios School operated as a primary school until 1968, having been built in the years 1906-1909, at the expense of the expatriate community in Egypt from Agios Efstratios. Today, it houses the "Museum of Democracy" with exhibits, photographs, original objects, hand written newspapers and video projections from the lives of people exiled on the island.

The churches of Christ, Ayios Nikolaos and Ayios Vassilios. The latter was built in 1727.

The rural Ayios Minas chapel was built on a hill where ancient relics have been discovered. In the same area, there is the Cenotaph of the Exiled (1941-1942) and the grave of a German officer who died during the Second World War.

The Nikos Sialmas Monument; he was a First Lieutenant in the Air Force, who died when his plane crashed in June 1992.

The Sea Caves and interesting geological formations along the coastline.