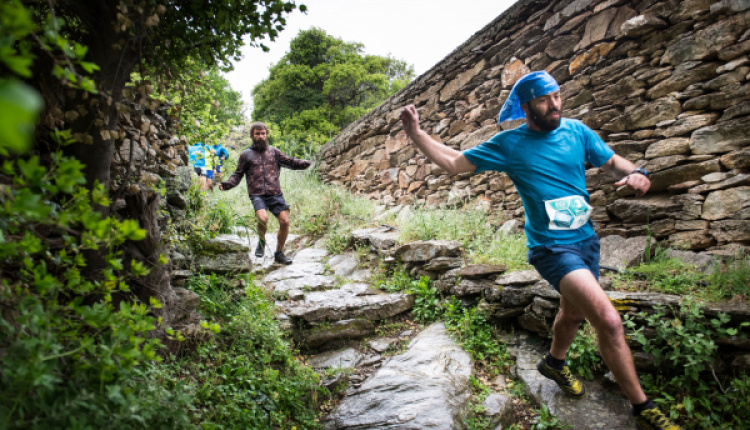 When we think of the Cyclades islands, the traditional white houses of Mykonos and Santorini immediately spring to mind, yet not many have heard of Kea – an unsung destination, the closest Cyclades getaway to Athens, but one that feels much further away. Within an hour from the port of Lavrio, you reach a haven of serenity, an island of distinct charm and surprisingly varied landscape. Wild, rugged slopes and steep mountains contrast with vast green valleys interspersed by almond groves and oak forests. Kea or Tzia has always been popular among Athenians but still remains a hidden gem waiting to be discovered.

Kea is a hiker's paradise with a large circuit of exciting trails that lead to fascinating coves and the ruins of ancient cities. Walking is the best way to explore the island, starting from the capital, Ioulis, a traditional Cycladic settlement amphitheatrically built on the slopes of two hills, with stone-paved streets and picturesque cobbled paths that offer the ideal setting for atmospheric strolls. Some of the major attractions include the island’s mascot,  the imposing statue of the Lion of Kea, and the Venetian castle. Kea has also been blessed with lovely off-the-beaten-track beaches. The long sandy beaches of Otzias and Gialiskari are the most popular, while Koundouros is yet another incredible beach, awarded with a blue flag. The fishing village of Vourkari as well as the port of Korissia, which teems with souvenir shops, cafes and restaurants are worth exploring. Last but not least, the monastery of Panagia Kastriani located at the northeastern part of the island, structured on precipitous rocks offers sweeping vistas.

The well-preserved network of footpaths provided the ultimate setting for Kea Challenge, a trail running event that took place on 13 and 14 of April 2019. In order to promote the traditional trekking paths and the cultural history of Kea, the island participated in the Cyclades Trail Cup 2019, a series of running events in Greek islands, aiming to provide incentives for athletes to explore the Cyclades islands via unique routes, specially tailored to the topography of each area.

Kea Challenge, the first event of the Cyclades Trail Cup 2019, welcomed 120 athletes from Greece and abroad and comprised 3 unique running routes. The athletes had to combine a downhill race on the first day with either a 5 km or 18 km route on the next day. The Karthaia downhill race took place on Saturday, April 13, under pouring rain. From the Stavroudaki settlement, the participants followed the traditional paths and dirt road that led steeply down to the ancient theatre of Karthaia. After a total descent of 240 meters, the athletes were rewarded with a landscape of impeccable beauty; an unspoiled beach and the remaining fragments of columns that proved the city’s former glory. On Saturday night, the participants visited the Folklore Museum of Milopotamos village in order to listen to traditional music, mingle with the locals, and get to know Kea.

On Sunday, April 14, the athletes had a choice to participate in either the 5 km or the 18 km race. The starting point of the race was next to the Municipality building of Kea, in Ioulis. The first kilometer was along the sun-drenched streets of Chora and then the runners followed amazing hiking trails to discover Kea’s verdant and diverse landscape, green covered hills, and lush foliage. The traditional, local treats at the finish line were undoubtedly a delicious reward!

Whether you enjoy hiking, exploring historic sites, strolling down stone-laid trails, sailing or swimming in crystalline waters, the island’s distinctive morphology and amazing coastline offer unlimited options. Kea is an underrated, enchanting destination that will definitely seduce nature lovers, and is just a stone's throw away from Athens!
Photo Credit: Ypatia Kornarou - GreekTV.com
XpatAthens is proud to be a Media Sponsor of the Cyclades Trail Cup