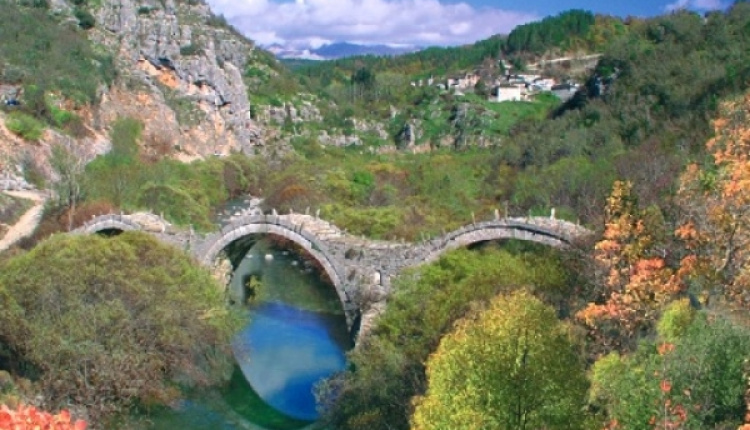 Zagori is an area of great natural beauty and unique architecture in the Pindus Mountains in Epirus in Northwestern Greece. The area is of about 1,000 square kilometers and contains 46 villages. Zagoria villages are called by Greeks “Zagorochoria” meaning the villages behind the mountain. The Zagori is divided into 3 geographical areas the West, the East and the Central Zagori. The south-Western Side is formed by Mount Mitsikeli (1,810 m).

On the north is Aoos river and the imposing mount Tymfi with its famous Gamilla peak (meaning Camel) and the stunning Lake Drakolimni up there!

The south-Eastern Side runs along the Varda River to Mount Mavrovouni (2,100 m) near Metsovo. It has striking geology and two national parks, one including the river Aoos and the Vikos Gorge, the other around Valia Kalda to the east. That was a brief geographical update but it is about time for me to become highly subjective and describe my trip during Easter time 2011 in the West and Central Zagori. So I took off from Athens with my boyfriend (he was driving thankfully!) and after about 5 hours we arrived in Ioannina which is the largest city in Epirus, famous for its beautiful lake, pies and desserts. We stayed in Grand Serai which is a very beautiful hotel that used to be a Xenia (meaning a state owned hotel) but thankfully it was recently renovated by its new owner Kostas Mitsis. The owner was born in Ioannina and moved at a very early age to Athens to find a job. He now owns about 20 hotels all around Greece. But his love has always been his hometown and his dream to create something there.

Waking up in Ioannina was a peaceful feeling; we had a nice view of the lake from our bedroom and the weather was sunny!! We decided to leave the room and go out for – what else- a pie! So we went to this small place called Select in the city’s centre, on Averof Street which is across the Officers’ Club. The place is exactly the same since the day it opened in the early ‘70s. You don’t go there to relax and enjoy the ambience; you just go there to eat! It is very famous for the baklava dessert. We didn’t have it though, since baklava has a very sweet and syrupy taste to start the day with, it is best enjoyed in the afternoon. We had bougatsa (a type of pie) with cheese and bougatsa with cream, both delicious and enough to keep us full until our final destination Mikro Papigo (meaning Small Papigo) in the West Zagori. We stayed in “Mikro Papigo 1700” which holds its name because of the restored house and 1st building of the complex which dates back to 1700. The owners of the place are very warm people who originate from the area, then moved to Athens and came back to their homeland a few years ago. They really made a big investment in the area but kept everything to its right proportion and with great taste. We just loved the wife’s cooking so most of the evenings we stayed in for dinner. She prepared delicious meat dishes.

I think it was on the 2nd day we decided to take a walk along the Voidomatis River, we were equipped with the right shoes holding the ankle tight so as not to twist on the rocky parts of the path. The walk was actually quite long, 2 hours to go to the traditional arched stone bridge of Kleidonia and another 2 to go back to Aristi where we started. But it was definitely worth every minute of it, we put our feet in the river to rest, we even drank water directly from it (not while having our feet in there!). In the afternoon we decided to go visit the village of Aristi where we checked out another hotel as well, the “Aristi Mountain Resort”, also very beautiful with indoor swimming pool and massage services available. I should not forget to mention that last time I was in Papigo I stayed in Megalo Papigo (Big Papigo) in “Avragonio” hotel owned by Petros and Marouska, also great. Marouska used to make a delicious cake for breakfast. It was voted by Conde Nast Traveller as the best guesthouse complex in Greece in 2010 by the readers.

It was the 4th day we decided to walk again, this time on a more challenging path. We went to the Vikos gorge and reached the Voidomatis springs! The way down is rocky and abrupt and the way up is still rocky and abrupt and uphill as well, so anyone planning to do that should think twice before going down! I must say for myself I am not used to such walks but I did find it challenging and fun after all. A friend of ours suggested we drive to the Central Zagori as well to bring her marmalade from the village of Kapesovo. We passed by Monodendri first, where the path of the Vikos Gorge leading to the Voidomatis river springs begins from. Then we went to Kapesovo to this picturesque little store with traditional products called “Sterna” meaning Cistern, because of the old cistern (13 m. deep, dating back to 1848) that is in the middle of the store, to try these great marmalades for ourselves! There we met Ellie Papagerorgiou, the daughter of the owner Thoukididis who showed us around. Ellie makes all the marmalades herself. My favorite is strawberry and if you like lemon you will love the one she makes. She is a very pretty, modern girl with many dogs and a passion for everything she makes. Her family also owns a beautiful guesthouse named “Thoukididis” after the father. It has only 5 rooms, decorated in Zagorian style, a bit romantic as well due to the 2 daughters and mother that work there as well. In the morning the guests can take part in the different activities of the family, such as collecting wild mushrooms, or distilling tsipouro or hiking.

After this visit the sun was setting, but we wanted to see more and especially this newly built small guesthouse I had read about in a magazine. The place is called “Kipi Suites” and is in Kipi area, on the slopes of Mount Mitsikelli. Maria Klimi, used to run the place, I don’t know if she is still there. Maria is the most hospitable person I met in my visit in the area! She offered us tea, cheese pie; she even gave us Easter eggs she hand painted to take with us. Everything Maria made was with great taste and love. The place is AMAZING. 8 different suites all with fireplaces, comfy sofas, big beds and contemporary design are there for the guests to enjoy. Last, don’t forget to buy lots of mountain tea or any kind of tea. The locals collect it from the mountain slopes and the aromas of the tea are unique as well as the benefits. We got our tea supply for a whole year from this small store in the town of Vikos a retired school teacher has who collects the tea himself with his wife. He also has this amazing honey, he calls the “merenda of the bees”, a combination of honey and hazelnuts you can’t resist!