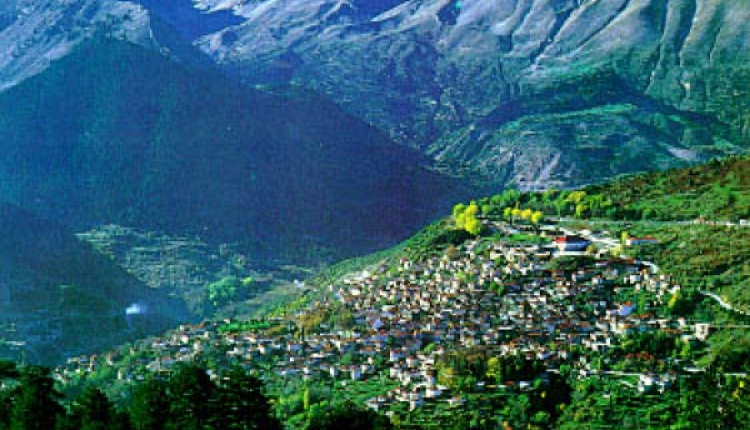 Metsovo is a town on the mountains of Pindus in Northern Greece. It is a popular winter holiday destination, ski resort and hikers love it in warmer months. Most residents are descendents of Vlach shepherds, a language still widely spoken in the village, and many are involved in the tourist industry. They dress in traditional costume, sell handicrafts and tempt travellers with regional cuisine.

There is a tradition in wood carving and many people make furniture, barrels, beehives, toys, utensils and they decorate churches and altars. It is a pretty little town, built on the ruins of ancient Tymphi and extending along one of Pindus' highest peaks. It is close to the peak of Katara, above the beautiful artificial Lake Aoou.

Its architecture is alpine, in stark contrast to the whitewashed buildings in other parts of Greece. The church of Agia Paraskevi has a carved icon screen and wall mosaics, copies of those at Ravenna.

It is well-known for its cheeses and winemaking. The Katogi vineyard belonging to the Averoff family is the most famous. A museum named Averoff Gallery is dedicated to Georgios Averoff.

Unlike many small towns around the world, there is plenty of work for Metsovo's young people, so the town has a youthful buzz.

On Sundays and feast-days, women wear their embroidered traditional dresses. Old men still have their special places in the main square so they can debate important issues while swinging their worry beads and drinking strong coffee.