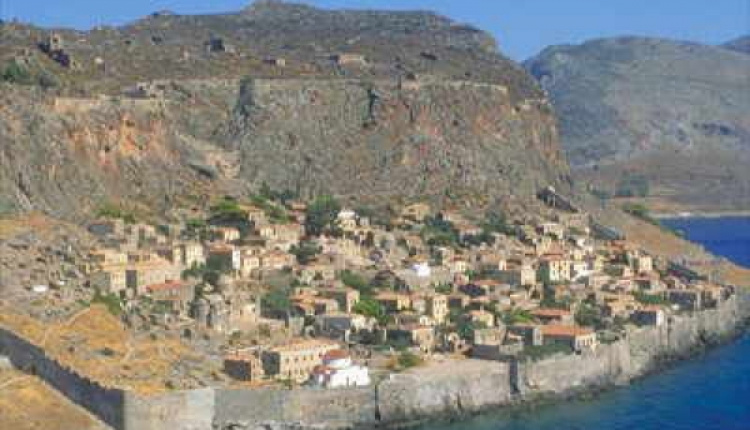 Monemvasia (Μονεμβάσια) is located in the southeastern Peloponnese in the prefecture of Laconia, 400 meters from land having been separated from the mainland by an earthquake in 375 A.D. Its name is derived from two Greek words, mone and emvassi, meaning "single entrance". It was called Malmsey by old English writers, Napoli de Malvasia by the Venetians and Malvoisie by the French.

Founded by the Byzantines in the sixth century, it shortly after became an important port.

Today a causeway links the mainland town of Yefira/New Monemvasia to Monemvasia or Kastro (castle). The Kastro is divided into a lower and an upper town. Many ruins of the original 800 houses and only four out of the original forty churches can be found in the lower town. Among them is the Church of the Elkomenos Christ (Christ Dragged), which is named after a famous icon of Christ given in 1700 to the church by Andreas Likinios, philosopher and chief physician to the ruler of Moldavia, Dimitirs Kandimir. The oldest church is St. Paul’s, which was built in 956, and today houses the museum. Further on, towards the eastern edge of the lower town and closer to the sea is the whitewashed Our Lady of Hrisafittisa, which was built in the sixteenth century.

High above, castle walls protect the upper town on the summit. There one can see the remains of Byzantine houses and public buildings and a vast cistern that ensured a water supply at times of siege. A fortified zigzag path from the upper town leads to the Fortress of Goulas on the summit overlooking the town. It is entered by a tunnel that still retains its ironbound gates. Among the ruins of houses and cisterns of the acropolis of the upper town stands St. Sophia, a Byzantine church founded by Andronikos II Paleologos on a plan similar to that of Daphni in Athens.

What to see/do - Monemvasia
After breakfast, walk up to the church on the edge of the cliff atop Monemvasia castle and try your hand at throwing a small iron or steel metal object to the sea (it will be drawn in towards the side of the hill, never reaching the sea, due to a magnetic field emanating from the rocks below.

Beaches:
To the north and south of Monemvasia there are beaches 2-3 kilometres from the causeway at Gefyra. Some well liked beaches slightly further away are at Plytra (20 km) and the stretch from Viglafia to Neapoli (35 kilomtres) both of which on on the west side of the peninsula, across from Monemvasia. The island of Elafonisi has some of the more scenic beaches.

Archaeology:
The Richia Museum of Folklore: Richia, about 25 km from Monemvasia in a building of 1875, which was the first school in the village. With farm tools, spinning wheels, clothing and woven items. Monastery of the Annunciation of the Virgin and Agios Georgios of Gerakas near Gerakas village, founded in 19th century.

There are many caves within easy reach:
Kastania - at Kastania Voion (south of Monemvasia before you reach Neapolis).
Vri Cave is north of Monemvasia with a precipice which you can climb down. You can find the entrance on the south west side and there is a lake below with crystal clear water.

How to get there
By car or bus: Most of the time, like most people, you will drive from another part of the Peloponnese or from Athens or Sparta, but in the summer there are sea routes and sailings, cruises and tours which head for Monemvasia.

By KTEL (long-distance) buses, from Athens and most cities in the Peloponnese.

By plane:
Kalamata airport (code: KLX) is about 130 kilometres from Monemvasia - with many choices of which route to take - scenic and mountainous or scenic and even more mountainous! Allow 2.5 hours and more as you will want to enjoy this trip.
Athens airport (code: ATH) to Monemvasia: about 285 km (4.5 to 5 hours).

By sea:
Githio in the south, Patra in the northwest and Piraeus (Athens) are main ports of arrival for a trip to Peloponnese and Monemvasia, between April/May and September ferries to and from the few islands surrounding this region can be most helpful if you are visiting several places.