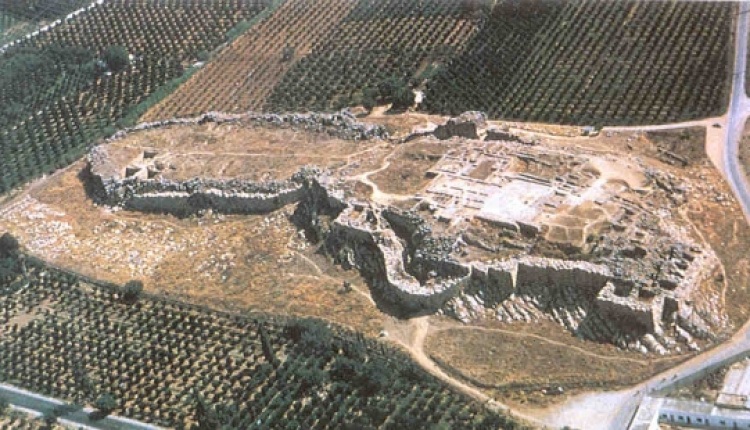 One of the must-sees of the Peloponnese peninsula is the ancient fortress of Mycenae. Once home to Agamemnon and Clytemnestra, this archaeological site launched the "Mycenean Period" where its residents and leaders dominated Greece, Crete, and the islands of the Aegean. It is located about 90 km south-west of Athens, in the north-eastern Peloponnese. Argos is 11 km to the south; Corinth, 48 km to the north.

Some visitors insist that a sense of evil lingers over Mycenae, even or especially in the harsh glow of the noonday sunshine which beats down on the bare rocks. More likely this is brought on by a touch of dehydration on summer days - Mycenae's tourist facility seems especially prone to run out of bottled water. One possible derivation of the name "Mycenae" comes from Perseus driven to drink water from a mushroom (myces), but this is not recommended for modern visitors.

The grave circles at Mycenae are strangely unnerving. Walking around the deep pit in the narrow curving passageway seems designed to invoke dizziness, a sense of spinning and falling into a vortex of the past. It's easy to believe Clytemnestra plotted murder, or tha Agamemnon sacrificed his daughter Iphigeneia to obtain fair winds.

Heinrich Schliemann and Mycenae
The air of foreboding was catnip to Heinrich Schliemann, who spotted the neglected site and just knew that it concealed great riches. He found it in both in its rich historical connections and in golden treasure, which he excavated from the burial circles. "I have gazed on the face of Agamemnon," he insisted, holding a battered golden face drawn out of the dirt. While the mask found at Mycenae is unlikely to have anything to do with Agamemnon, who lived centuries later than the dating of the site, the seemingly-tranquil, mustachioed golden mask most likely shows us some anonymous pre-Homeric king's face.

The Golden Grave Goods of Mycenae
The goods that accompanied him and others, now on display in Athens at the National Archaeological Museum, were rich and beautiful in a harsh way - a dramatic bull's-head rhyton (drinking vessel), a golden one of a lion's head, a bronze dagger inlaid with gold, and bright, though delicate, gold adornments which assemble into a crown-like image.

While most of the Mycenean gold will stay at the National Archaeological Museum, visitors to Mycenae itself now have a bonus: a new museum on-site displaying some of the thousands of other artifacts found there. Mycenae, so rich in its history, now can be seen in a more complete context, making this must-see site even better.

The "Lions" of Mycenae
The two felines are actually lionesses comprising the triangular lion gate, one of the most recognizable icons of world architecture, still seem to be roaring in unison, probably announcing the unexpected approach of so many ill-armed visitors. Or is that video camera a weapon?

Above and Beyond Mycenae
The acropolis and its ruined walls above the circle graves and beyond the lion gate are intriguing and the extra climb provides an improved view, though visitors on hot days may want to give it a pass. The treasury of Atreus is a better bet - your admission to Mycenae covers visiting this unusual beehive tomb just outside Mycenae, which can be a cool relief on hot days.

Mycenae Travel Tips
Good soles on your shoes are especially necessary for this site - the long marble-paved ramp leading to the Lion Gate was meant to knock attackers off their feet, and, like the choklakia pavings of the Dodecanese islands, still works on modern marauders. For the same reason, this particular site is challenging for those who are not sure on their feet - though persons using canes may actually be better off than those without! I remember an unexpected moment of rest when I tripped backwards while videotaping the Lion Gate, luckily landing on a seat-sized rock just behind me.

A day's trip to Mycenae can be combined with a visit to Epidaurus or Corinth or, for the intrepid and well-organized, all three.