Seven Things To Do In Ancient Corinth 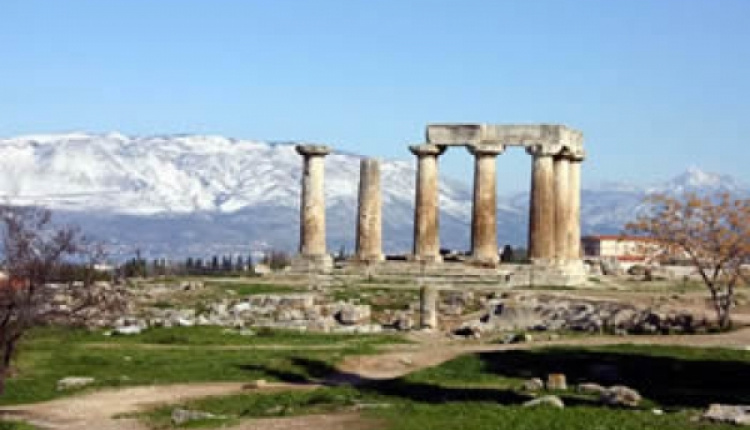 Forty- eight miles west of the great city of Athens, Ancient Corinth, one of Greece’s richest cities, stood as a radiant beacon on the narrow isthmus connecting the Peloponnesian peninsula to the mainland of Greece. A cultural and commercial center, as well as a naval power, Corinth enjoyed a commanding presence in the ancient world, owed largely to its strategic positioning.

It had two ports, one on the eastern side of the isthmus (Lecheon) for trade with European and Northern African merchants from throughout the Mediterranean. The other stood on the western edge (Kenchreai) for trade with Aegean, Persian, and Egyptian traders.

Every second spring witnessed the Isthmian Games in honor of the Earthshaker, Lord Poseidon, Greek god of the sea. In the mythical tales of Caenus, crown prince of ancient Iolkos, as recounted in the novel Caenus and The Quiver of Artemis, Caenus sets out to prove his worth at the fictional Apollo’s Tournament in Corinth, a city that was as famous as it was infamous. While at the tournament, Caenus meets a local peasant girl named Adriande, who takes Caenus on a tour of some of the very sights I mention below.

Following are Seven Things To Do In Ancient Corinth:
1. Visit The Doric Temple Of Apollo: Apollo, one of the twelve Olympians, was the Greek god of light, truth, prophecy and archery. He shared his penchant for archery with his twin sister Artemis, whose poison-tipped arrows could kill immediately. Built on a hill overlooking the agora marketplace, the Temple of Apollo displayed exquisite craftsmanship. It included 38 Doric columns and inspired all who saw it. Strike up the lyre.

2. Stroll Through The Agora: The agora was an ancient marketplace. Surrounded by colonnades and stoas (covered walkways), the agora served as the hub of the city's political and economic life. There were shops, museums, temples, and administrative buildings. Near the agora was the Elephant’s Tusk, a local taverna where Caenus meets a local peasant girl named Adriande, whom he later falls for.

3. Climb To The Top Of The Acrocorinth: The Acrocorinth was a monolithic rock, a veritable castle fortress overlooking the city. With its secure water supply, Acrocorinth was used as the last line of defense in southern Greece, repelling foes from entry into the Peloponnesian peninsula. Legend held that, Pegasus came here to drink from a spring. The climb is definitely worth the effort. The view of both of the city’s ports is simply breathtaking.

4. Walk The Diolkos: The diolkos (Greek for "haul across"), was a stone-paved roadway that connected the Saronic Gulf with the Gulf of Corinth, effectively linking Corinth’s two ports. This overland route was highly valuable in that it allowed merchants, passengers and cargo to avoid the difficult and time-consuming trip around the southern end of the Peloponnesian peninsula. Walk a mile in the sandal prints of these ancient traders.

5. Join The Cult of Aphrodite, Attend Her Festival, Aphrodisia: Ahh, Aphrodite… The Greek goddess of love and beauty was worshipped widely. Women wanted to be her. Men wanted to be with her. The Temple of Aphrodite, at the summit of the Acrocorinth, was the site for the most active festival honoring the goddess: Aphrodisia. During this festival the Cult of Aphrodite was quite active, engaging in ritualized prostitution… all in the name of the goddess, of course. This festival was not for the faint of heart.

6. Drink From The Sacred Spring At The Fountain of Peirene: Near the north-west end of the agora was the large public Fountain of Peirene, a marvel in marble. Within, there were chambers through which the water flowed into an open pool. Seven steps led downward to the sacred spring where priests were said to consult with Apollo.

7. Attend Apollo’s Tournament: Every year the summer solstice launched the Festival of the Sun in Corinth. The prestigious Apollo’s Tournament, was the main attraction. Based upon the Isthmian Games, Apollo's Tourney was a grueling contest of skill and might, pitting princes and noble sons against one another in such competitions as bull riding, endurance running, wrestling, and sword fighting. In Caenus and the Quiver of Artemis, Caenus and his nemesis Makedon are guided by the hands of the gods toward an epic showdown in the final stage of the tournament.