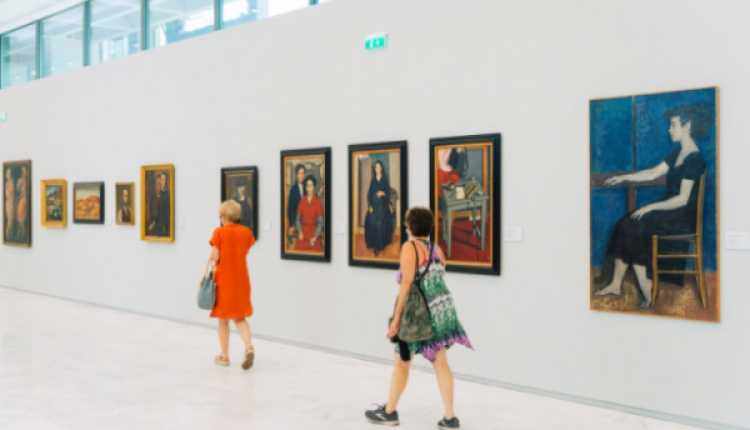 After a long and extensive remodel, Greece’s most important historical art gallery is now open to the public again, with essentially double the space. The sleek glass-clad site, just across from the Hilton Athens, houses the country’s largest single collection of modern art and sculpture, dating from the post-Byzantine era to the present. For the first time in nearly a decade, visiting art lovers can trace Greece’s artistic progress over the course of its modern history, all under one roof.

With a heady haul of iconic works from great Greek artists such as Yannis Tsarouchis, Konstantinos Parthenis, and Dominikos Theotokopoulos (better known as El Greco), chronologically organized over three gleaming floors, you’ll need hours to take it all in properly. To help you cut to the chase and make your visit more meaningful, we’ve scoured the permanent collection to share some of our favorite highlights. 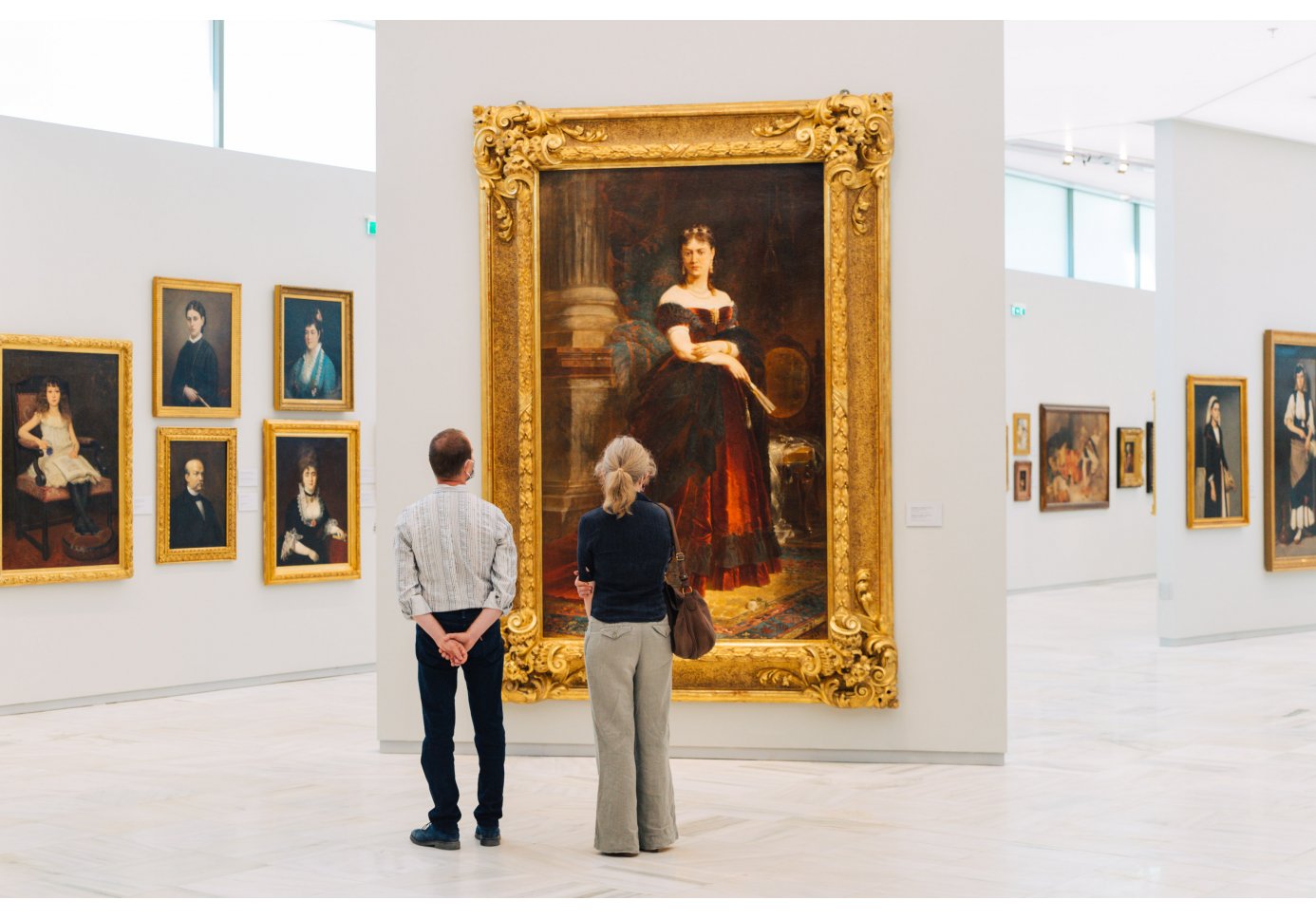 The son of a famed marble sculptor from Tinos island, Nikephoros Lytras is himself billed as “the father of modern Greek painting”. His most well-known portrait is Greece’s first royal couple, Otto and Amalia. But it’s this sumptuous, large-scale oil, immortalizing the wife of a prominent industrialist, that planted him on the radar of his peers. The globally renowned Greek artist Takis used to say that “Mrs. Serpieri was the first Greek portrait” (he greatly admired the textural qualities of her wine-colored velvet gown). Lytras’ portrait phase was characterized by a very studied style and lavish gold frames that sometimes cost more than the paintings. It was an affirmation of the affluent new society emerging in Greece who all wanted their portraits painted. As one of the pioneering members of the Munich School of Greek artists championed by King Otto, Lytras was in particularly hot demand.

Collecting the Nets by Konstantinos Volanakis (1871) 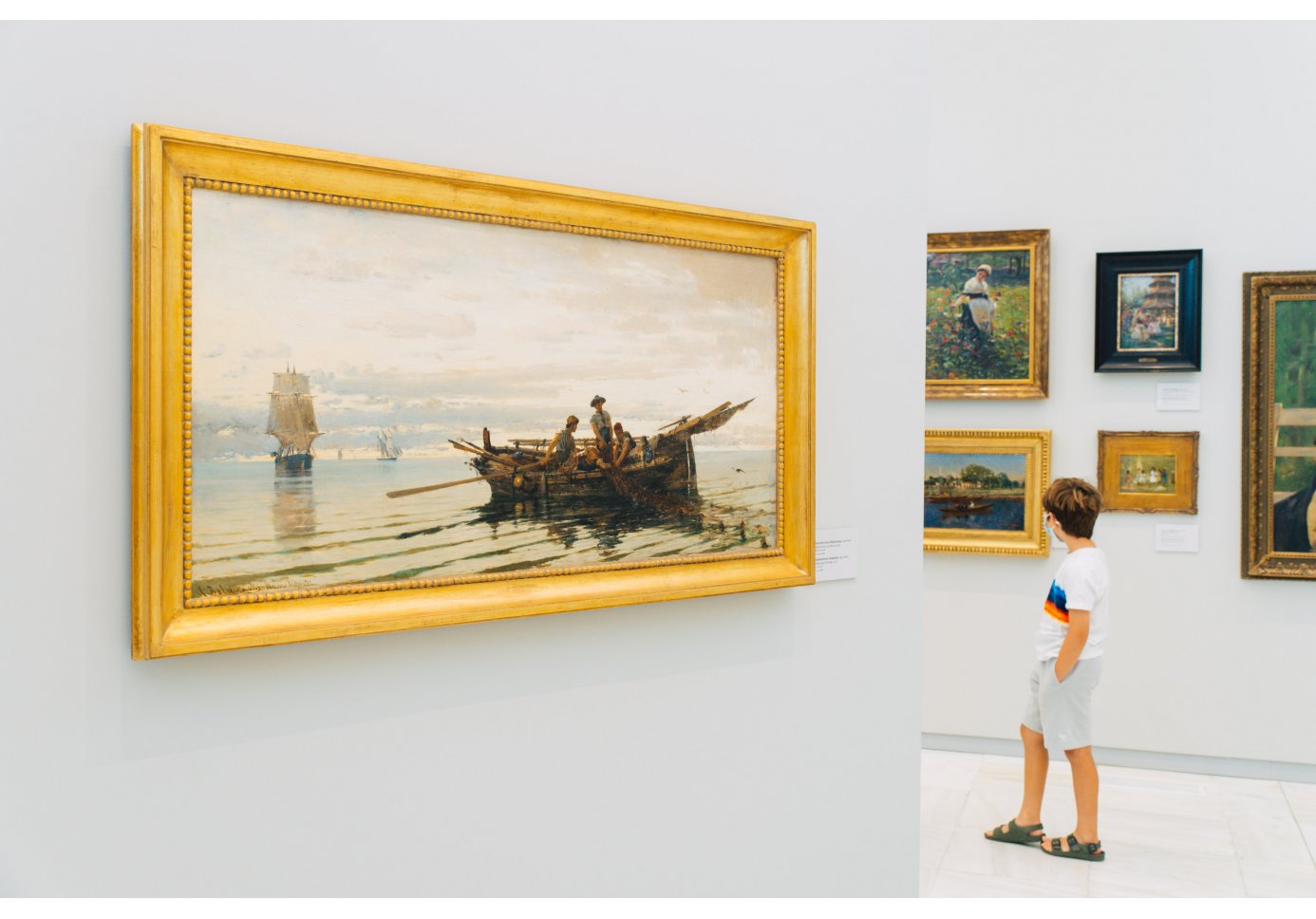 Greec\ce’s legendary bright light inspires endless artistic expressions. But it wasn’t always ideal when it came to the development of Impressionism in this country: no clouds to create the genre’s trademark luminosity. Konstantinos Volanakis triumphs nonetheless in this dreamy depiction of fishermen pulling the nets at sunrise. The sky is flooded with melancholy light and the rippling sea pulsates with life and variation; demonstrating Volanakis’ firm grasp of Impressionism’s primary lesson: a deep comprehension of the essence of things. This accountant-turned-artist grew into one of Greece’s most important seascape painters, known for his lyrical and atmospheric compositions of momentous naval battles and harbor scenes.

The Betrothal of the Children by Nikolaos Gyzis (1877) 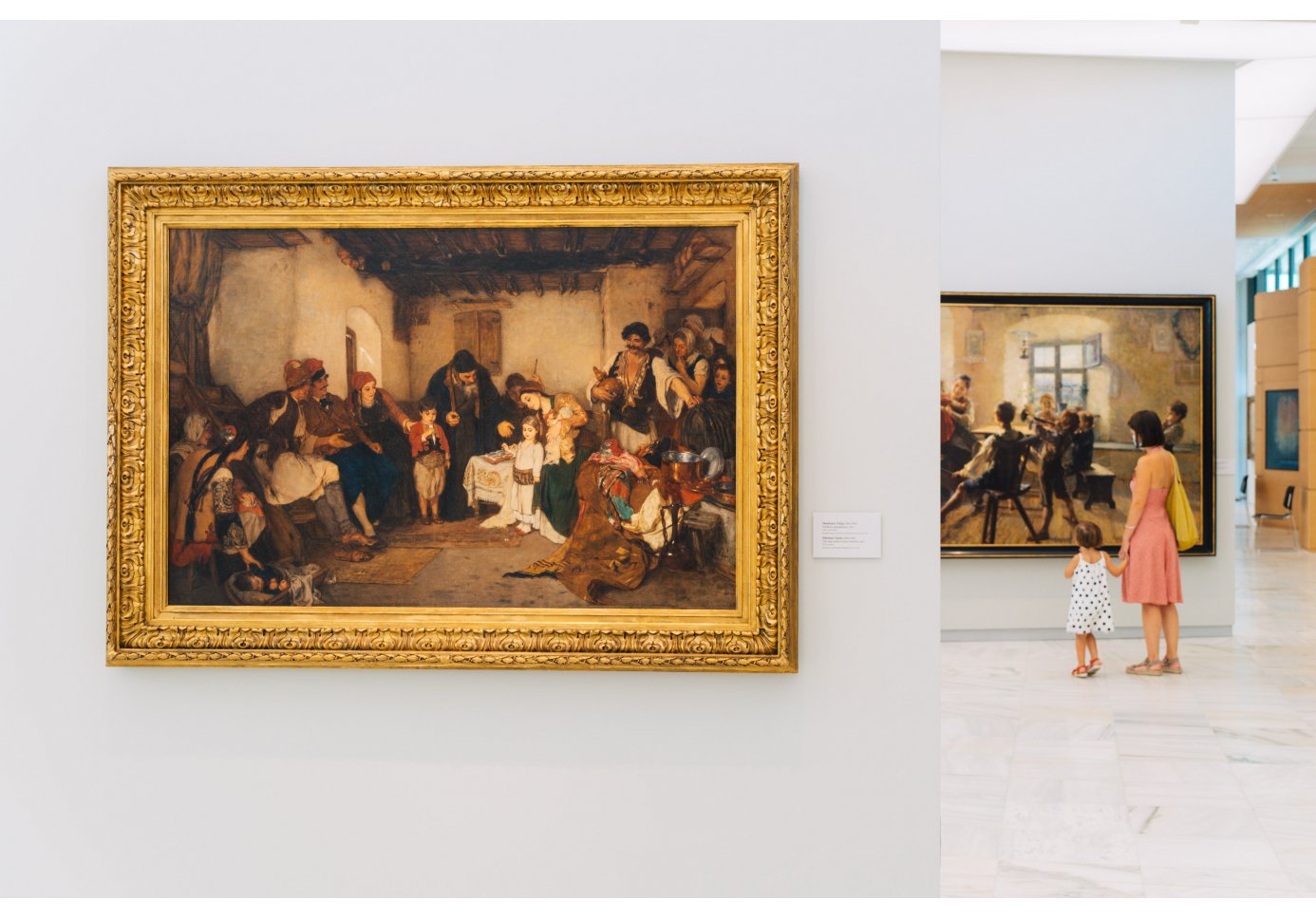 Another leading light of the esteemed Munich School of Greek artists who studied in Bavaria, Nikolaos Gyzis opens a poignant window into life under Ottoman rule. The Turks used to take young boys from their families to raise them as Muslims (their sons would often return as young men to fight against their former villages). In a bid to escape this cruel fate, families betrothed their children from the age of 10. Here, in a typical village home, the priest places a ring on a bemused boy’s finger; while the girl appears to shy away from the priest’s entreaties. A relative kitted out in the traditional Greek fustanella kilt, likely one of the fathers, stands by to toast the union from a gourd-like vessel. Notice how remarkably this prized genre painter captures the color and texture of the utensils and fabrics: from the gleam of the copper pot to the rich sheen of the silk garments.

Exodus from Messolonghi by Theodoros Vryzakis (1878) 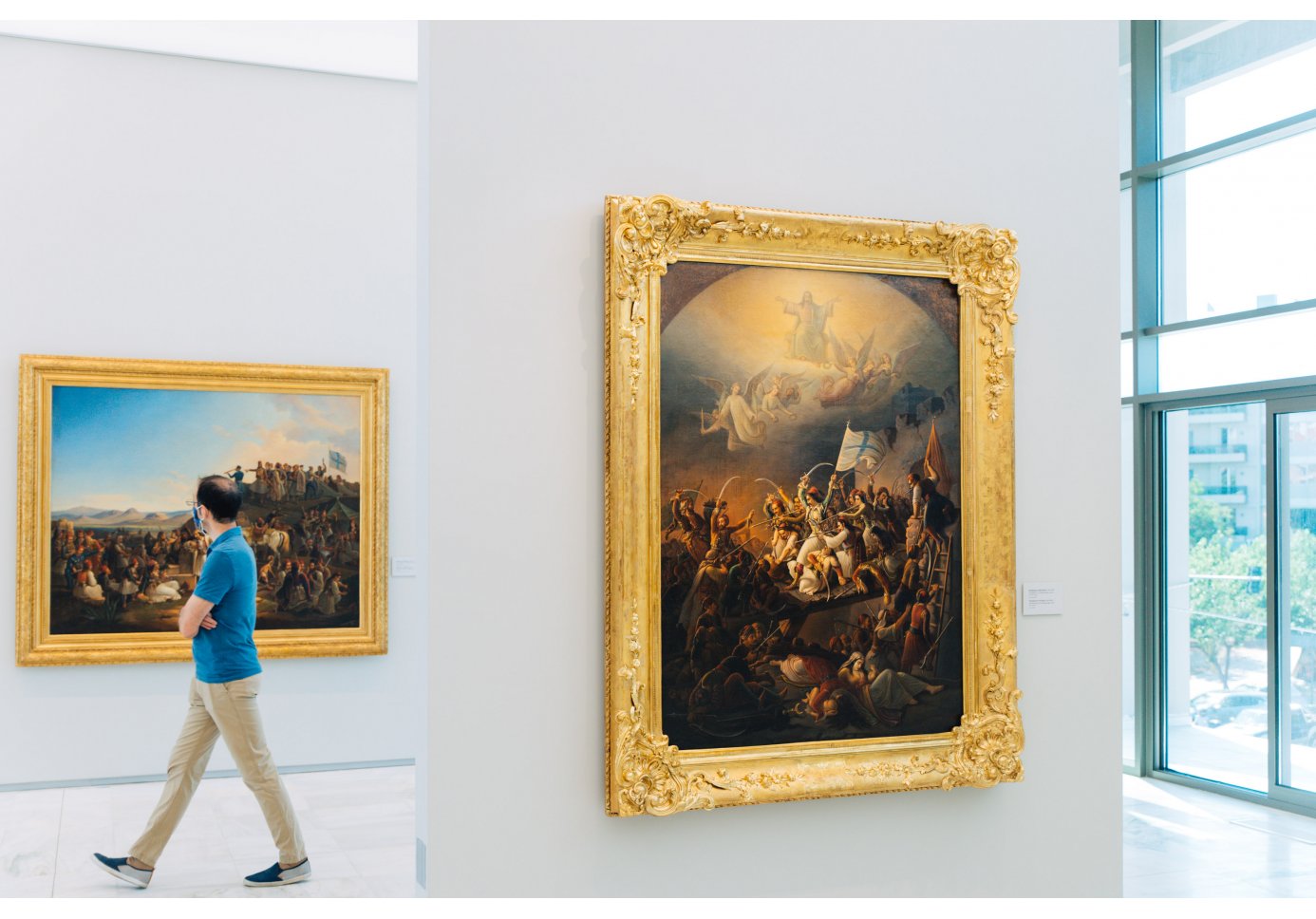 One of the most tragic and recounted episodes of the Greek fight for freedom is meticulously portrayed here by Theodoros Vryzakis (himself orphaned by the Greek War of Independence when his father was hanged by the Turks). On the night of April 10, 1826, the inhabitants of Messolonghi in Western Greece fled a year-long siege to be slain by the waiting enemy. Vryzakis unites heavenly and earthly axes to show an enthroned God in a golden cloud blessing the romanticized Greek fighters; while angels with laurel wreaths prepare to coronate the heroes. Mothers and children lie wounded or dying as armed Turks breach the city walls on a ladder. You can almost hear their cries and feel the uproar and terror. As one of the founders of the Munich School of Greek artists, Vryzakis’ paintings fuelled patriotism among Greeks - and Philhellenes - who believed their cause was rightful and had God’s backing. 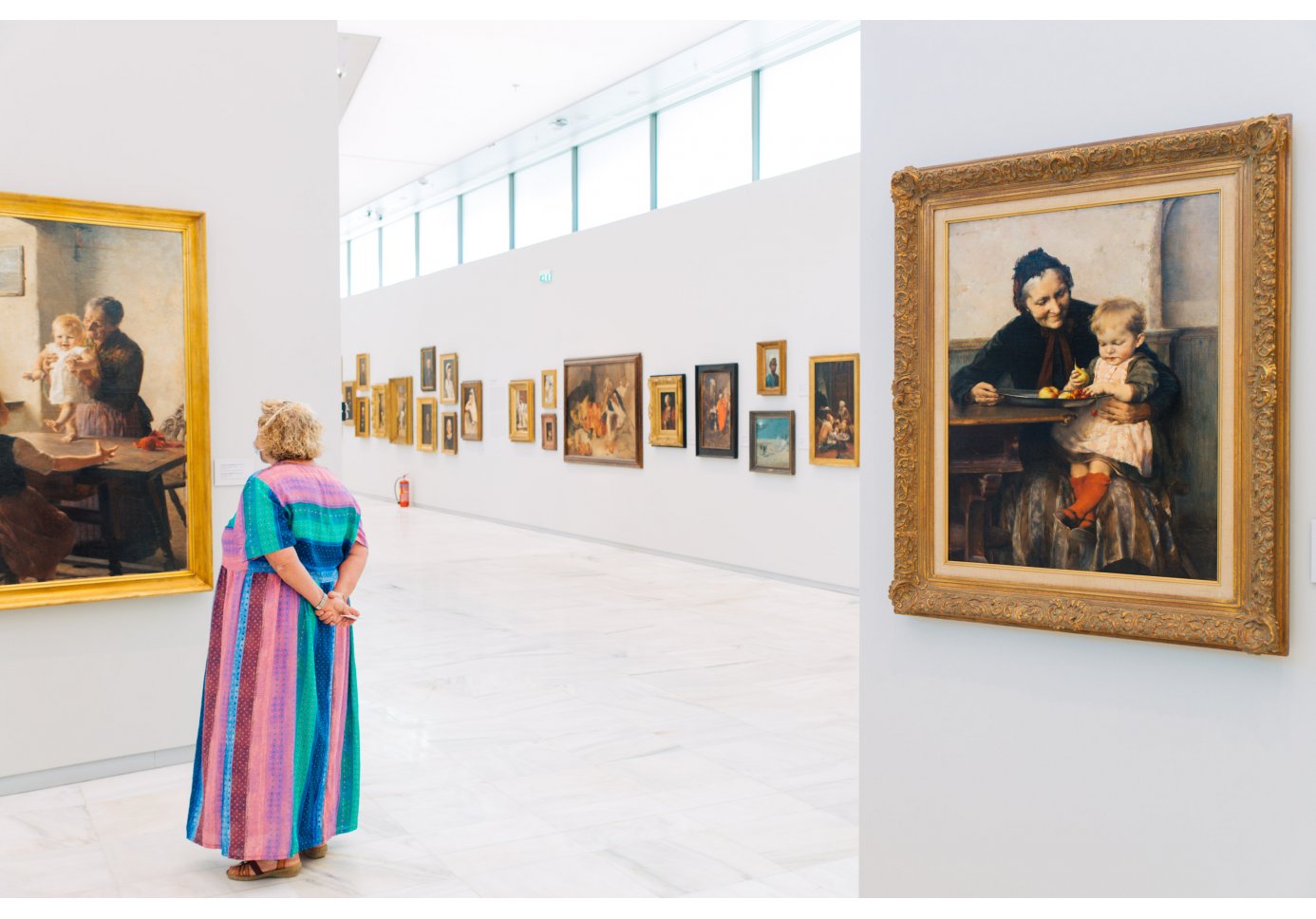 The intimate bond between grandparent and grandchild is one of Greece’s most endearing cultural touchstones. Georgis Iakovidis, among the last great champions of the Munich School, carved out a name for himself as “the painter of childhood”. Many of his works, such as this delightful example, inimitably captured the primal relationship between grandchildren and their elderly grandparents. Here, the bronze fruit plate cements the artist’s mastery of still life techniques; while the infant’s red socks nod to Impressionism. What shines brightest though is Iakovidis’ profound insight into the psychology of the connection between these two diametrically opposed life stages. Fun fact: Iakovidis would later become one of the first directors of the newly-established National Gallery. 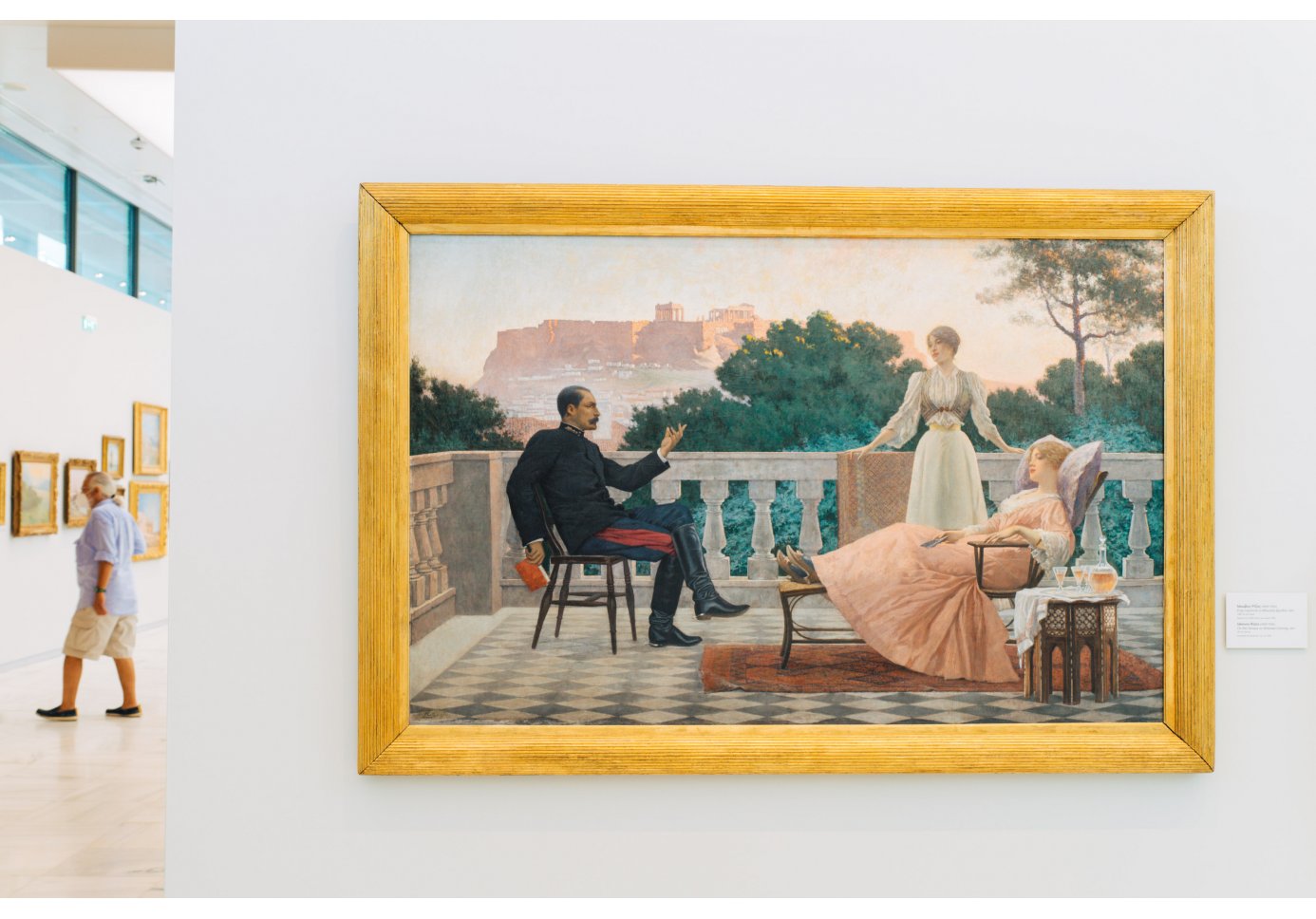 We might have guessed that Iakovos Rizos studied art in Paris. This luxurious painting, set on the terrace of a neoclassical abode in Plaka, oozes the euphoric spirit of the Belle Epoque and the artistic milieu of the late 19th century. Rizos’ oeuvre of “beautiful, elegant women in palaces or gardens” marks a dramatic gear shift from the predominant themes of war and Hellenism that defined Greek art in previous decades. Here, a winsome sunset cloaks the Acropolis, casting its blushing light over a trio of leisurely protagonists who represent the wealthy bourgeois life. A handsome Cavalry officer recites verse to the evident delight of two stylish Athenian ladies (some say it’s Prince Nikolaos, potential heir to the throne, and known for his romantic pursuits). Rizos may sidestep the Impressionist doctrines employed to great effect by his contemporaries, but the enduring charm of this painting lies more in the wonderful feeling it evokes.

To read this article in full, please visit: thisisathens.org
Whether you've just arrived in town – or have been here for years – Athens always has new secrets to share!
This is Athens is the official guide to this captivating city of ancient energies and booming urban culture. Compiled by a team of specialist local writers, This is Athens brings you an authentic and intimate portrait of a living Athens beyond the guidebooks – along with daily curated listings of all the best events and great weekend inspiration all-year round. From must-know neighbourhoods and emerging art hubs, to gourmet hotspots, cool shopping and the buzziest bars, This is Athens will help you to get the most out of living in Athens!
Thank you This is Athens for your contribution as an XpatAthens Partner.