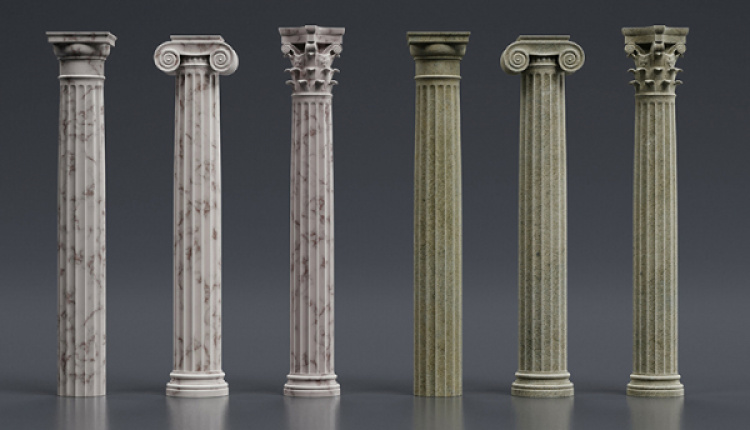 Ancient Greek architecture was produced by the Hellenic people who thrived on the Greek mainland, the Peloponnese, the Aegean Islands, and in the colonies in Anatolia and Italy from around 900 BC until the 1st century AD. The earliest remaining architectural works dating from about 600 BC.
Ancient Greek architecture is famous for its temples–the Parthenon being a prime example–that are found throughout the country, mostly in ruins, but a few surviving surprisingly intact. Other types of ancient Greek buildings still surviving today are open-air theaters, processional gateways (propylaea), public squares (agoras), storied colonnades (stoes), town council buildings (bouleuteria), monumental tombs (mausoleums), and stadiums.
There are 3 distinct orders in Ancient Greek architecture: Doric, Ionic, and Corinthian. The Romans adopted all 3 orders around the 1st century BC, and since then, they have been continually used in European Neoclassical architecture.
Even though sometimes the Doric order is considered the earliest, there is no concrete evidence to support this. In fact, the Doric and Ionic orders seem to have made their appearance at around the same point in time; the Ionic in eastern Greece and the Doric in the west and mainland.
The Temple of Hera in Olympia is the oldest, well-preserved Doric style temple dating back to about 600 BC. The Doric order later spread throughout Greece and Sicily, where it continued to be the leading monumental architectural style for 800 years.

Doric Order
The Doric order originates in the mainland and western Greece. It is the starkest architectural order and is characterized by short, organized, massive columns with plain, round capitals, and no base. With a height that is just 4 to 8 times its diameter, Doric columns are the shortest of all orders. The shaft of the Doric order columns is channeled with 20 flutes, while the capital consists of a simple ring necking or annulet. The echinus is convex, or circular cushion-like stone and the abacus is a square slab of stone. Above the capital is a square abacus that connects the capital to the entablature. The frieze of the Doric entablatures is consists of triglyphs and metopes. A triglyph is a section that consists of 3 vertical bands, separated by grooves, while a metope is the plain or carved relief located between 2 triglyphs. The Greek forms of the Doric order come without an individual base, and they are placed directly on the stylobate.

Ionic Order
The Ionic order originates from eastern Greece and is distinguished by slender, fluted columns with a broad base and two opposed volutes or scrolls in the echinus, which is adorned with an egg-and-dart motif. The Ionic shaft comes with 24 flutes, 4 more than its Doric counterpart. At its base, an Ionic column has two convex mouldings called tori, separated by a scotia. A column of the Ionic order is 8 times its lower diameter. The architrave of the entablature usually consists of 3 stepped bands, and its frieze is sometimes adorned with continuous ornamental carved figures.

The Corinthian order is the most intricate of the Greek orders. It is distinguished by a slender fluted column and an ornate capital, which is decorated with 2 rows of acanthus leaves and 4 scrolls—the Corinthian order is widely considered the most graceful of the 3 orders. The shaft of a Corinthian order pillar has 24 flutes, which is usually 10 diameters high. According to the Roman writer Vitruvius, the invention of the Corinthian order is attributed to Callimachus—a Greek sculptor of the 5th century BC. The oldest known Corinthian style building is the Choragic Monument of Lysicrates in Athens that was erected between 335 and 334 BC.