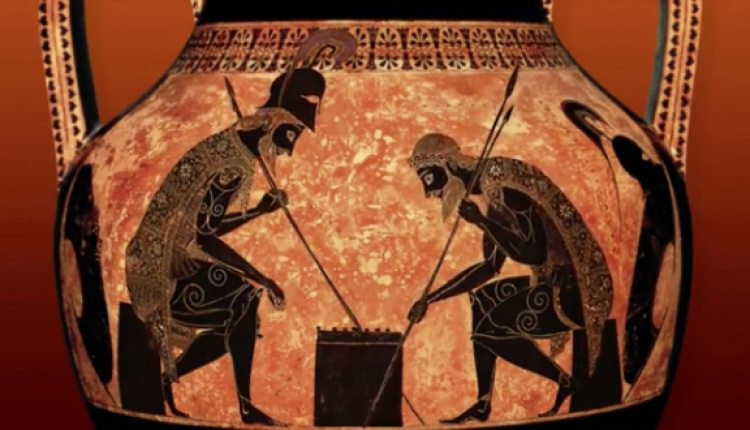 What if you could see the original artwork depicted on ancient Greek vases come alive in a series of animated pictures?  Sonya Nevin, co-creator of the Panoply Vase Animation Project alongside with Steve K. Simons, talks to Greek TV all about Panoply.  Below is a snippet of an interview with Sonya Nevin and Michael Klioumis about the concept of Panoply and the usage of animation on vases.

M.K: How did you come up with the concept of Panoply?
S.N: It was during my doctorate at University College Dublin. Steve (i.e. Steve Simons – Panoply’s animator) and I started messing around making stop-motion ancient world stories with toy-figurines, just for fun. I showed at a few student society events and they got a great response. Then I heard from teachers that some of them were showing the animations in school. So we decided to push the ancient-world animation concept further. The idea of working with vase scenes came to us and really began to explode the potential of what we were doing. From there we began working on getting the movement right and on ways they could be beneficial in museums and beyond.

M.K: Can you tell us about the uses of the animations on vases?

S.N: In the Ure Museum in Reading, UK, and in the University College Dublin Classical Museum in Ireland, museum visitors can watch animations alongside the vases they were made from. I absolutely love that. It encourages people to look again at the vases – to understand the scenes, to feel their movement, and to think creatively about what the artists chose to depict.

To read the article in full, please visit: Greek TV