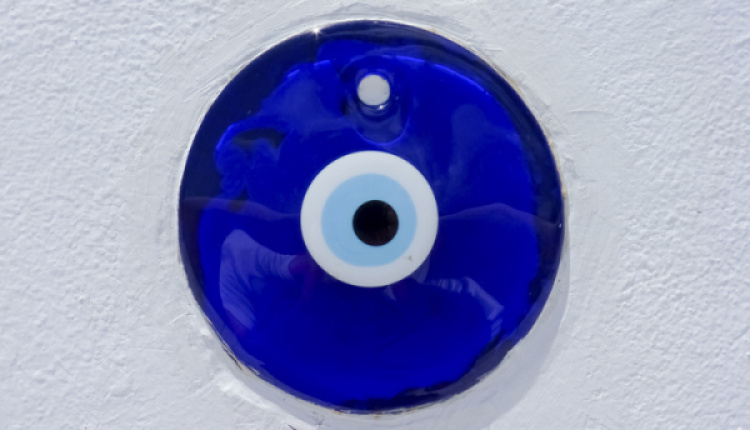 Greeks are known for their many superstitions, some of which have regional origins. Here is an assortment of superstitions (or customs) that are still prevalent in the lives of many local Greeks.

Evil Eye
The evil eye is perhaps the most talked-about Greek superstition, can strike a person at any given moment. There has probably been an occasion when you were all dressed-up, and minutes after someone complimented you about your looks, you spilled coffee all over your outfit. That's the evil eye. According to Greek tradition, there are a few different things you can do to keep away the evil eye.

You can buy a blue eye-shaped charm and wear it on a necklace or bracelet. The color blue is thought to ward off the evil eye, but it's also commonly believed that blue-eyed people are prone to give the evil eye. So beware when a blue-eyed person pays you a compliment, as the compliment could end-up in disaster.

Other ways to ward off the evil eye's effect include asking an older woman (such as a mother, aunt, or grandmother) to recite a secret prayer called 'xematiasma,' spitting (or rather a spitting sound), or throwing salt over the shoulder.

Pomegranates
In Greek culture, the pomegranate fruit is associated with fertility, luck, prosperity, renewal, and regeneration since ancient times. The custom of smashing a pomegranate on New Year's Day is very symbolic. According to tradition, the juicy, bounteous ruby-like segments of the fruit fill the home with health, happiness, and joys as many as the pomegranate's arils.

Perfume
In Greece, there is a weird taboo against giving perfume as a gift, as it is thought of ruining friendships and relationships. To counteract the harmful effect, it is customary that the recipient of the gift gives a coin back to the gift giver.

Garlic
Greeks believe that garlic has the power to keep evil away. You'll often see braids of garlic, or large garlic heads dangling over the entryways of stores, restaurants, and homes. Apart from warding off the evil eye, garlic is also assumed to keep away evil spirits and demons. It is common for some folk to carry a clove of it on them or in their pockets.

Knives
Never hand a Greek person a knife, as giving a knife directly into another person's hand means they will fall out. Instead, you are supposed to set it down and let them pick it up.

Money
Greeks believe that money attracts money, so don't leave your pockets, wallets empty–always leave at least a coin or two–and never withdraw all the money from your bank account. It is also customary that when you gift a wallet or purse, you put a coin or two inside before giving it to the recipient.

Touch Red or Piase Kokkino
When two people say the same words at the same time, Greeks believe it's a sign that the 2 will get into an argument. To avoid the fight, they immediately need to say 'Piase Kokkino' or 'Touch Red' and touch something red, such as clothing or a piece of food.

Spitting
While Greek people spit for several superstitious reasons, the most common is to keep evil away. Spitting, or rather the spiting sound which sounds like 'ftou ftou ftou' is always done 3 times to represent the Holy Trinity. Greek people often say 'ftou ftou ftou' when they hear about another person's misfortune to protect themselves or their loved ones from it. Another common occurrence is with children and babies when people engage in spitting to protect the child from harm and bad luck.