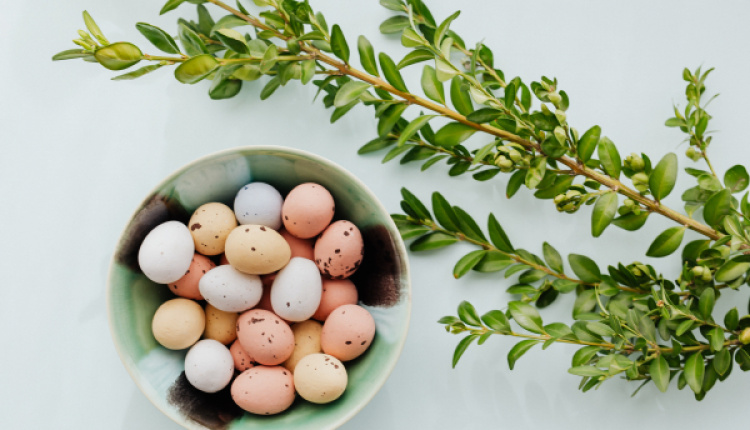 For Greeks, Easter is the biggest religious holiday of the year. Although many of the celebrations have roots in pre-Christian times - the Elysian mysteries in ancient Greece were also a celebration of rebirth after death when in winter everything dies and in spring they're born again - today in Greece, Easter celebrations have a direct connection with the Orthodox faith.

Preparation for Easter begins with Kathara Deutera (Clean Monday), which is the first day of lent. During lent, which lasts for forty days before Easter, one is not supposed to eat anything that comes from animals with blood in its veins. Basically, that means no meat, fish, milk, cheese, and egg. Lobster and caviar are fine, as are ouzo and tsipouro!
Not many people follow lent too strictly until Greek Easter, although it is common to quit for instance only meat or cheese, or maybe chocolate or wine - essentially give up something that is not very good for your health. Restaurants and fast food shops will normally have special menus during this time of the year, for everyone who does follow Lent.
The big week, or as it is known in Greek 'Megali Evdomada,' is the week from Palm Sunday to Easter Sunday. Despite it being an ordinary work week, shops have special hours, there are church services every evening, and many people clean and prepare their homes in preparation for the big feast of Easter Sunday.

Holy Week is essentially a revival of Jesus´ last days when the Orthodox Church relives the last week of the life of Jesus. On Thursday Greek Easter bread called tsoureki is baked and the traditional red Easter eggs are dyed. On Good Friday you´ll hear the church bells ring all day for the funeral of Christ. The Bible said that he died in the ninth hour, and at nine o´clock Greeks follow a symbolic funeral procession. Many people participate in the quiet procession while carrying candles and the experience overall is quite solemn.
Saturday is the last day of lent and it is filled with preparations for the midnight meal, including a traditional soup called magiritsa. Just before midnight on Saturday everyone gathers at church with their Easter candles (or 'lambades' in Greek). Be there early in the evening if you want to be sure to get in, although there will be many people outside the church in the courtyard and on the street.
And then the big moment! Just before midnight, all the lights are switched off, as a symbol of Jesus' descending to the kingdom of death, and a moment later the priest announces 'Christos Anesti,' or Christ Has Risen. People start cheering, greeting, and kissing each other, and many fireworks go off.
Everyone carries candles with them to be lit by the priest's candle which represents the 'holy flame.' The tradition is that representatives from the Greek Orthodox church have transported to Greece a candle lit by the eternal burning flame at the Church of the Holy Grave in Jerusalem, and the flame is spread from candle to candle all over Greece.
Each person carefully carries their lit candle home in order to bless their home by drawing a cross with the flame above the entrance for protection from all evil. Many Greek homes will keep the flame burning in a traditional 'kandili' until the following Easter.
And then the feast begins! The 'tsougrisma' game begins when people break each others´ red eggs by hitting them against each other. The one with the strongest egg is said the have good luck for the whole year! The traditional saying is 'You close your mouth with an egg when lent starts and open it with an egg when it finishes.'
The first meal after lent is usually the traditional Easter soup called magiritsa, eaten after church on Saturday night. After the midnight meal, anyone who has the energy goes out to party until the next day...
On Easter Sunday, family and friends gather for a big Easter meal, which typically includes roasted lamb, loads of different salads, and mezedakia. On Easter Sunday, there is a scent of spring and delicious food across the entire country!
Wishing everyone a Happy and Healthy Easter!
This content has been sourced and prepared by Codico Lab.