The Pompeii Of The Aegean: The Archaeological Site Of Akrotiri On Santorini 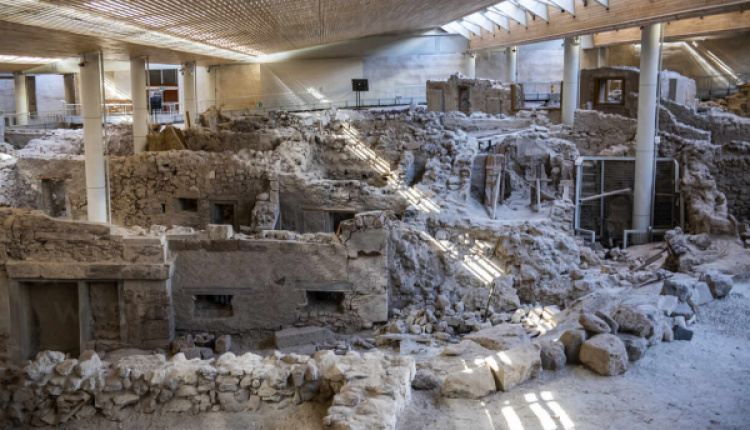 The Akrotiri area of Santorini is located at its south-western end, 15 km from Firá, the island’s modern capital. Its name means "cape" (in the sense of a headland or promontory) and it is one, standing on sheer cliffs stretching three miles west of the southernmost part of Santorini.

It was one of the most important centers of the Aegean in prehistoric times with the first settlements dating back to the Late Neolithic period (3500-3000 BC).

During the Middle and Early Late Bronze Age (20th-17th century BC), the settlement expanded and became one of the most significant urban and port centers in the Aegean. Its vast area (approximately 200 acres), excellent urban organization, sewage system, multi-story buildings decorated with exquisite wall decorations, luxury furniture, and household items are testament to its significant development.

Akrotiri's network of foreign contacts was particularly extensive, as evidenced by the various imports found in the ruins of the buildings: it maintained close relations with Minoan Crete but was also in contact with mainland Greece, the Dodecanese, Cyprus, Syria, and Egypt. Life in the city came to an abrupt end at some point in the late 17th century BC when its inhabitants decided to abandon it due to strong earthquakes. What followed was a volcanic eruption of the greatest magnitude, around 1600 BC, known as the Minoan eruption of Thera.

The island is believed to have been known, until then, as Strongyle ("circular") due to its round shape; with the eruption of the volcano at its centre, a large part of it was submerged, creating the contemporary shape of Santorini. The volcanic materials covered the city and the entire island, protecting the buildings and their contents to this day, as would later happen in Pompeii.

A visit to the archaeological site of Akrotiri on Santorini is a true journey back in time. Buildings and objects trapped under a thick layer of volcanic material have been preserved intact or have left their imprint. Solidified ash has covered the ruins of the settlement, keeping alive the images of a civilization destroyed by the volcanic eruption. Their exceptional preservation impresses visitors today and has rightly given Akrotiri the name 'Pompeii of the Aegean'.

To read this article in full, please visit: greeknewsagenda.com