The Corinth Canal & The History Behind It 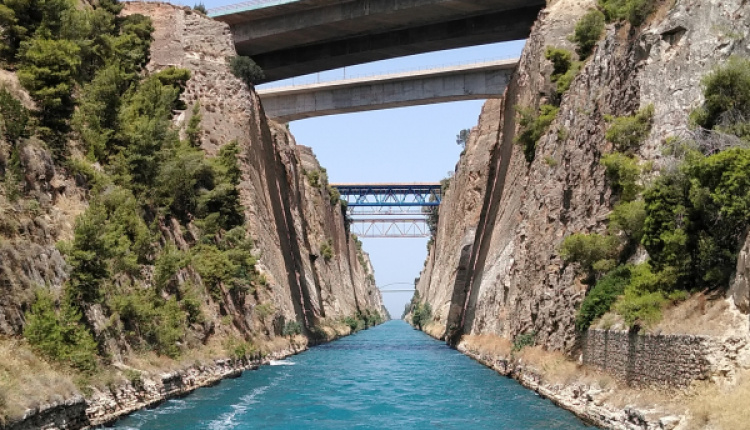 The Corinth Canal is one of the most important constructions of modern Greece, which played a catalytic role in Mediterranean trade.

Designed by Greek engineer Petros Protopapadakis its length is almost 6.5 kilometers and it is 25 meters wide. The Corinth Canal connects the Corinth Gulf with the Saronic Gulf and is an important passage that once allowed ships to enter the Aegean Sea, however, it is now impassable to contemporary ships.

The canal was built in 1893, 25 centuries after the conception of its idea, as it remained a dream for more than 2,000 years. Before its construction, ships in the Aegean Sea who intended to travel to the Adriatic or anchor in Corinth, a prosperous shipping center back then, had to circumnavigate the Peloponnese, adding an extra 185 nautical miles to their route.

History of the Corinth Canal

Back in the 7th century B.C., Periander, the tyrant of Corinth, decided to connect the Gulf of Corinth with the Saronic Gulf but his plans remained unaccomplished. Legend has it that the oracle advised him against the idea of building a canal and he, afraid of having to endure the wrath of the Gods, abandoned the project.

After about two and a half centuries, the Romans attempted to build the canal, however, every emperor that tried to do so, including Julius Caesar, Caligula, and Nero, died before the canal was completed.

In 1830, Ioannis Kapodistrias, Greece's first governor, opted to continue with the major project. The idea of reopening the Isthmus surfaced once more. Ioannis Kapodistrias assigned the project to Virle d' Uct, a French engineer who estimated that the building would require around 40 million gold francs, an enormous amount of money for the newly-founded Greek State.

In 1869, with the inauguration of the Suez Canal, the Greek government reconsidered its own canal. Prime Minister Thrasyvoulos Zaimis at the time, passed a law in 1870 authorizing the construction of a Corinth Canal and a French company was hired to oversee the project. It was not long before money became an issue again and the project came to an end.

Then in 1881, the Société Internationale du Canal Maritime de Corinthe was commissioned to build the canal and operate it for the next 99 years. King George, I of Greece was present when construction began in April 1882. After eight years of work, it ran out of money, and in 1890, construction resumed when the canal project was transferred to a Greek company. The canal was finally completed in July 1893.