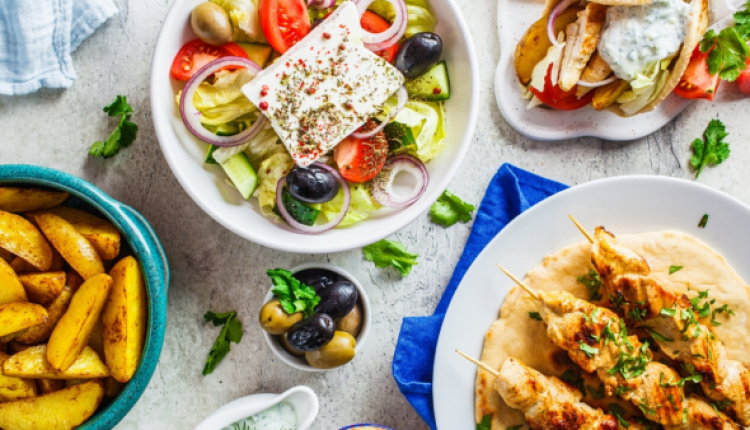 Greek food is often considered among the most healthy cuisines in the world, as it is linked to the Mediterranean diet, which has been proven to have countless health benefits.

According to several studies, the Mediterranean diet is associated with reduced risk of several chronic diseases, including cancer, Parkinson’s disease, Alzheimer’s disease, type 2 diabetes, and cardiovascular disease. Some have even linked it to preventing depression.

Here are some of the superstar foods in this delicious health-promoting diet!

Olive oil is the common denominator in the different dietary patterns of the Mediterranean diet across the region, with Italy, Spain, and Greece being the top three producers in the world. Extra-virgin olive oil is rich in carotenoids and polyphenols, offering antioxidant and anti-inflammatory properties. It's the main source of fat in the diet, and it is also used for cooking and baking.

Wheat is the basic grain of the Mediterranean while another traditional grain is farro (or emmer), an ancient wheat with renewed popularity in recent years. Bread is often baked using unrefined wheat and barley flours. Mediterranean wheat is also used for couscous and pasta. Traditionally, wheat was ground with millstones, producing a fiber-rich whole-wheat flour with a lower glycemic index.

Alcohol is common in the traditional Mediterranean diet, dating back to ancient times. However, it is consumed in moderation and usually in the form of wine and, as a rule, during meals. Red wine, in particular, contains antioxidant polyphenols and flavonoids while helping increase HDL (good) cholesterol and decrease LDL (bad) cholesterol levels.

Chickpeas are a good source of fiber, folate, and manganese while also providing proteins, iron, and magnesium. Chickpeas are one the earliest known cultivated legumes, they are the key ingredient in many traditional Greek dishes.

This essential ingredient of all Mediterranean cuisines is often found in a variety of sauces and dishes. For instance, tzatziki, a staple in Greek food, is yogurt mixed with garlic, cucumbers, and olive oil, while aioli, an Italian sauce, is made mixing garlic with eggs and olive oil. The sulfur compounds in garlic produce both its pungent odor but are the key to its health benefits, which include anticancer, antioxidant, and anti-inflammatory effects.

Traditional feta cheese and yogurt are fermented, which makes them rich in probiotics, also providing an extra portion of protein to a diet that’s mostly plant-based. Authentic Greek feta is made with goat’s milk or sheep’s milk while yogurt with honey is a common Greek breakfast.