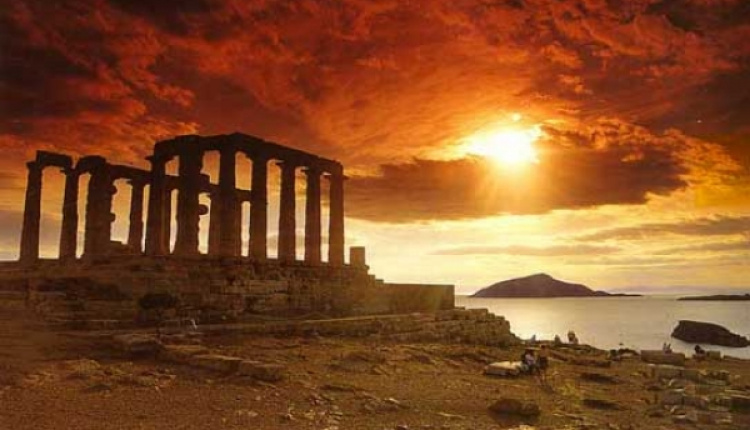 The ancient Greek temple of Poseidon, god of the sea in classical mythology, is located at the tip of the Athenian Riviera at Cape Sounion. The remains are perched on the headland, surrounded on three sides by the sea. The ruins bear the deeply engraved name of English Romantic poet Lord Byron (1788–1824). The site is a perfect day-excursion from Athens, especially beautiful for sunset over the Aegean Sea as viewed from the ruins ~ definitely an incredible spectacle!

Archaeological finds on the site date from as early as 700 BC. Herodotus tells us that in the sixth century BC, the Athenians celebrated a quadrennial festival at Sounion, which involved Athens' leaders sailing to the cape in a sacred boat.

The temple at Sounion whose columns still stand today, was probably built in ca. 440 BC. This was during the ascendancy of Athenian statesman Pericles, who also rebuilt the Parthenon in Athens. Today’s standing temple was constructed over the ruins of a temple dating from the Archaic Period. It is perched above the sea at a height of almost 60 m. The design of the temple is a typical hexastyle i.e. it had a front portico with 6 columns. Only some columns of the Sounion temple stand today, but intact it would have closely resembled the contemporary and well-preserved Temple of Hephaestus beneath the Acropolis, which may have been designed by the same architect.
As with all Greek temples, the Poseidon building was rectangular, with a colonnade on all four sides. The total number of original columns was 42: 15 columns still stand today. The columns are of the Doric Order. They were made of locally-quarried white marble. They were 6.10 m (20 ft) high, with a diameter of 1 m (3.1 ft) at the base and 79 cm (31 inches) at the top.

At the centre of the temple colonnade would have been the hall of worship (naos), a windowless rectangular room, similar to the partly intact hall at the Temple of Hephaistos. It would have contained, at one end facing the entrance, the cult image, a colossal, ceiling - height (6m) bronze statue of Poseidon. Probably gold-leafed, it may have resembled a contemporary representation of the god, appropriately found in a shipwreck, shown in the figure above. Poseidon was usually portrayed carrying a trident, the weapon he supposedly used to stir up storms. On the longest day of the year, the sun sets exactly in the middle of the caldera of the island of Patroklou, the extinct volcano that is offshore, suggesting astrological significance for the sitting of the temple.

In a maritime country like Greece, the god of the sea was bound to occupy a high position in the divine hierarchy. In power, Poseidon was considered second only to Zeus (Jupiter), the supreme god himself. His implacable wrath, manifested in the form of storms, was greatly feared by all mariners. In an age without mechanical power, storms very frequently resulted in shipwrecks and drownings.

The temple at Cape Sounion, therefore, was a venue where mariners, and also entire cities or states, could propitiate Poseidon, by making animal sacrifice, or leaving gifts.

Archaeological excavation of the site in 1906 uncovered numerous artefacts and inscriptions, most notably a marble kouros statue and an impressive votive relief, both now in the Athens National Archaeological Museum.

The Legend of Cape Sounion:

According to legend, Cape Sounion is the spot where Aegeus, king of Athens, leapt to his death off the cliff, thus giving his name to the Aegean Sea. The story goes that Aegeus, anxiously looking out from Sounion, despaired when he saw a black sail on his son Theseus's ship, returning from Crete. This led him to believe that his son had been killed in his contest with the dreaded Minotaur, a monster that was half man and half bull. The Minotaur was confined by its owner, King Minos of Crete, in a specially designed labyrinth. Every year, the Athenians were forced to send 7 men and 7 women to Minos as tribute. These youths were placed in the labyrinth to be devoured by the Minotaur. Theseus had volunteered to go with the third tribute and attempt to slay the beast. He had agreed with his father that if he survived the contest, he would hoist a white sail. In fact, Theseus had overcome and slain the Minotaur, but tragically had simply forgotten about the white sail.