Marathon: A Walk Through History 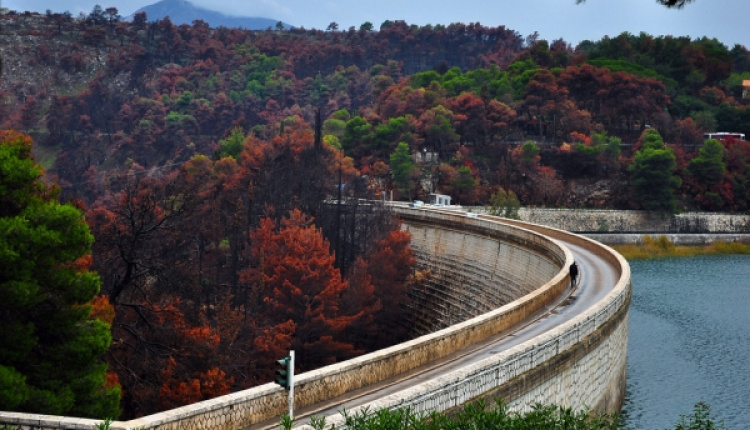 There are some places that leave their imprint behind. No matter how many years go by, they continue to radiate a certain brilliance. Marathon is such a place. Chosen by the ancient Greeks to become a permanent part Athens Greece history, it is a place of civilisation, courage and daring that tells of the course followed by the Greek people across the ages and through eternity.

Certainly a visit to Marathon calls for an early start, when Nature is just coming alive and the sun begins to warm the paving stones. Marathon is a flashback in time, a journey to the past and present of Athens, as the monuments and natural beauty tell the whole story of the capital of the city-state. Marathon got its name from the son of Epopeus who was banished by his father and came to this area - 42 km northeast of Athens - a suppliant.

A fertile, half-moon-shaped valley, it is protected by the hills of Vrilissos and the mountains of Diakria and touches the sea at Marathon Bay. It is one of the most fertile valleys, where fruit trees and grape vines are cultivated. The route from Athens to the village passes through planted fields, vineyards, olive groves and lush hillsides on Attica's east side. The wondrous peaceful beaches rest the eye while the body enjoys the sun and clear waters. The most popular beach is at Schinias, which served as the venue for rowing and canoeing competition during the 2004 Olympic Games.

Back to the future
The Marathon area is of great historical significance, as it was the site of the famous battle of the same name that took place in 490 BC. Ten thousand Athenians and a thousand Plataeans pushed the Persians to the sea, where they boarded their ships and retreated. The Greeks owed their victory over the Persian army to military genius Miltiades. Immediately after the battle was won, a soldier named Pheidippides was sent to Athens with the news. He ran all the way to Athens and managed to say, "We have won," before he collapsed and died. That was the first marathon, and it is this same route that today's marathon runners follow. The 9m-high tomb was erected at the site of the battle in memory of the 192 Athenians who had lost their lives fighting; there were originally 10 columns on top of the burial mound to represent the 10 tribes of Attica. The tomb was discovered in early 1884 by Heinrich Schliemann.

The Rhamnus mystery
The archaeological site of Rhamnus lies near Marathon and findings at the site indicate the area was inhabited during the Neolithic age. Its name derives from the word "rhamnus," a shrub variety (buckthorn) found throughout the area. In ancient times, Rhamnus was known for its port and its castle. There are remains of two temples at the site: the Great Temple dedicated to Nemesis, the goddess of divine retribution, which is considered the most important sanctuary of this specific goddess in all of ancient Greece; and the Small Temple dedicated to Themis, the goddess of justice. Both temples were built in the 5th century BC. There are also remains of the ancient theatre, the fortress and several grave sites. Besides the archeological sights, visitors are rewarded with the marvelous views toward Evoikos Bay and the surrounding lush green landscape.

Marathonas Archaeological Museum
Though well-known to visitors, it is a rather small museum featuring important findings from various historical periods. It is located next to the Middle Helladic cemetery of Vrana and houses artefacts from the prehistoric age through the Roman period. The artefacts from the Neolithic period discovered in the Cave of Pan at Oinoi, the funerary stelae and the votive inscriptions from the sanctuaries of Marathon are especially noteworthy. The most notable finding is the "Marathon Youth (Ephebe)," an impressively intact statue found by fishermen in 1925. It is bronze, 1.24 m tall, and thought to be of the Praxiteles school. The museum is open daily, except Mondays, 8:30 am - 3 pm.

The Marathon Run Museum
This is the second spot that makes a visit to Marathon a true history lesson. It was opened in 2004 and presents the complete history of the Olympic Marathon Race from 1896 in Athens through 2004, when it was again held in Athens and in which 220 athletes from 55 countries participated. Most of the photographs, posters and drawings have been provided to the museum by the International Olympic Committee from the Olympic Museum Lausanne. The Marathon Run Museum is open daily, except Monday, 9 am - 9 pm.

Marathon Lake
A dam was constructed at the point where the torrents of Charadros and Varnavas meet to shore up the lake and collect rain water. This is how the artificial lake of Marathon was formed; following necessary treatment, its waters flow to the Athens reservoirs through underground aqueducts. It is the largest permanent source of potable water for Athens and Piraeus. The Marathon Dam is particularly impressive as the artful construction and Pendelikon marble cladding make it the only one of its kind in the world. Marathon Lake is a place of incomparable beauty, enriched by the pine forest and picturesque lanes; there is also a quaint café near the dam.

Schinias-Marathon National Park
This is one of the 25 fully charted protected areas of Greece. The Olympic Rowing and Canoeing Centre was located here and the tomb of the fallen warriors from the Battle of Marathon was included in its designation. The national park is divided into eight zones, one marine zone and seven landbased zones. Each one warrants special protective measures so that the ecosystem is not disturbed. Specifically, the Schinias wetlands (430 hectares) and hilly areas around the Kynosoura peninsula and Drakonera are fully protected. The wetlands constitute a habitat for species of wild birds, such as egrets and hawks, as well as many other species of birds. It is possible to take part in a variety of activities here, such as bicycling, bird watching and short excursions to nearby areas.

How to get to Marathon
From the centre of Athens, follow Vasilissis Sofias Avenue, which branches into Messogion Avenue. Marathon Avenue begins at Stavros Aghias Paraskevis and continues to Marathon. At the Marathon intersection, Lake Marathon Avenue leads to the lake.