Exploring The Caves Of Lake Vouliagmeni 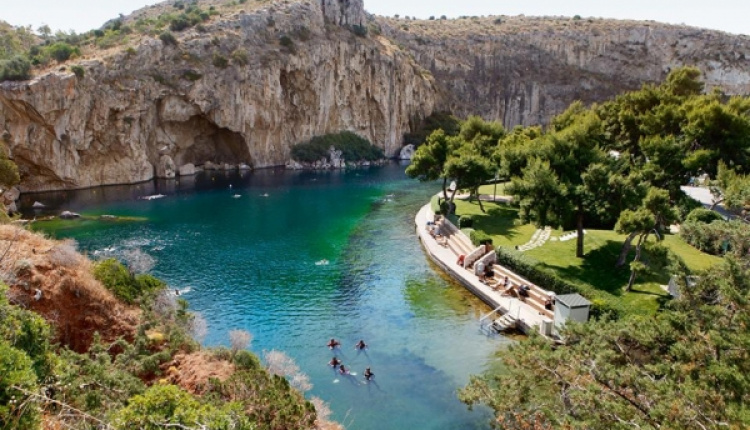 “Lake Vouliagmeni, on Athens's southern coast, is unique, with a massive cave system, white cliffs and warm waters – which under temperate conditions are also extremely clear – while the colors you see inside from the refraction of the light and the clear waters are really spectacular,” says Spyros Kollas, a professional diving instructor and enthusiast who has spent the past 16 years exploring the world beneath the waves.

In February, under his guidance, the 24-member InnerSpace Explorers Greece diving team – comprising mainly Kollas's students, from Greece, Switzerland, Sweden, Germany and Spain – started the exploring the mysterious lake in Vouliagmeni. The aim was for them to gain experience in how a proper diving expedition works, as well as to chart – for the first time ever – four small caves that lead into the lake's legendary main cave further in.

For some three months, members of the team conducted dives in teams of up to six people – breaking off into pairs – and took measurements, photographs and videos while also collecting other data. They would meet early in the morning to get themselves and all their gear to Vouliagmeni and start the dives. Each dive would last a maximum of 90 minutes – which was how long their oxygen and bodies could last – before packing everything up again and heading back home. It was an arduous and time-consuming process, but they had fun, they learned a lot and they all got hooked. Some team members with demanding jobs had to fit dives in around their busy schedules while others traveled from abroad, but all managed to overcome any kind of of obstacle in order to return to the water.

The first phase of the project was completed a few weeks ago with the mapping of the first of the four small caves.

“It has a length of 70 meters from the entrance, a width of 30 meters, and a height, from the top to the bottom, of 40 meters, exceptionally clear waters and no stalagmites or stalactites. It is stunning,” says Kollas.

The team's discoveries will not remain secret for long as a recent partnership between InnerSpace Explorers Greece and Dutch firm Reef Interactive, which specilizes in 3D imaging, has resulted in the first 3D interactive dive map app, which allows users to take a virtual dive into this particular part of Lake Vouliagmeni, receiving information such as the temperature of the water, the depth and the kinds of rocks found there.

The next phase of the operation, which consists of mapping the antechamber of the lake's main cave, will start in early 2016.