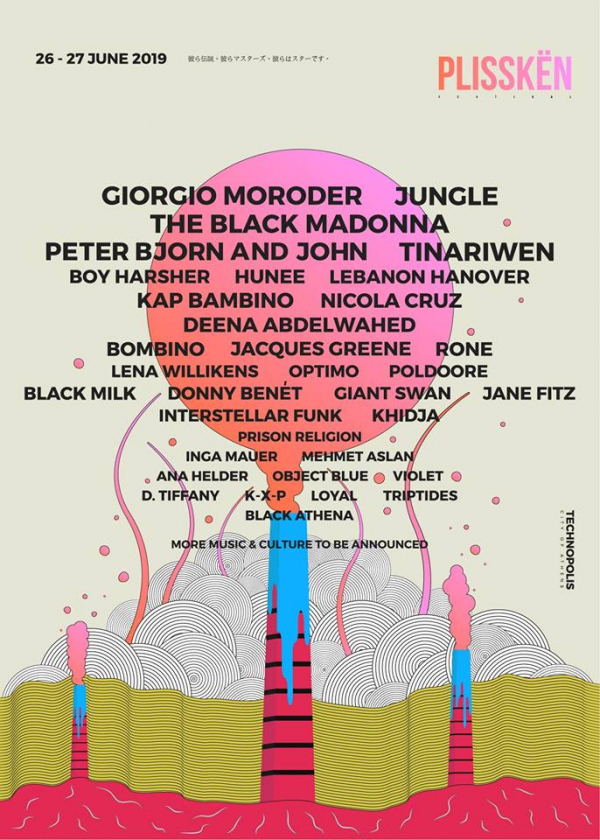 Plisskën Festival is pleased to announce the full lineup for Summer Plisskën 2019 which takes place on 26 & 27 June at Technopolis, the well-known and loved cultural venue in the heart of Athens historic center.

Loyal to its tradition of showcasing a line-up celebrating a broad mix of styles and quality, with both established and up-and-coming artists, Plisskën’s lineup consists once more of a vast variety of live acts, producers and DJs. From indie and funk to electronic and synth-pop, Plisskën Festival’s 3 stages will host some of the freshest and biggest names in the music scene at the moment. Giorgio Moroder, the man, the myth, the legend disco and electronic music pioneer, Tinariwen, the masterful Tuareg musicians from the Sahara Desert, The Black Madonna, the underground star of house music, are some of this year’s headliners.

Aside from another hard-hitting, eclectic line-up, Plisskën also continues to push the boundaries of their environmental and social ethos. With an Environmental Policy Strategy at place since 2010, they’ve received 2 ‘Commended’ ratings for two consecutive years from the Greener Festival Awards global governing body. And The Lab, an annual free workshop organised by Plisskën, takes place in Athens prior to the festival. Through a number of theoretical and practical seminars hosted by professionals in their respective fields, The Lab participants get the chance to learn about all of the elements that comprise putting on a festival. Lets Do Summer! 2 days, 3 stages, 12 hours of music, a big Food Court with the very best of flavours, a luscious and refreshing Cocktail Bar, a Lounge to rest ones dancing feet, and numerous other activities!

“Plisskën is rammed, fizzing with energy and nobody goes home until dawn” – The Guardian
“A righteous celebration of noise” – Drowned in Sound
“Plisskën bodes a great location, an eco-friendly policy and an incredible lineup..” – Culture Collide
“Athens Awesome Plisskën Festival ” – Noisey
XpatAthens is proud to be a Media Sponsor Of the Plisskën Festival