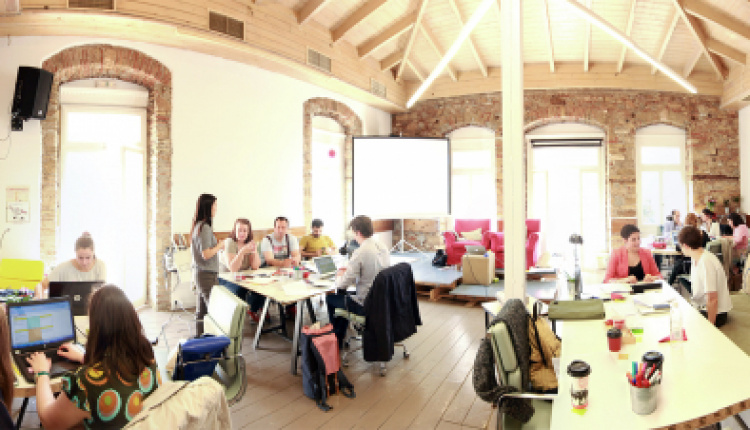 Impact Hub Athens 2013 - 2018.
We are counting 5 years of positive social impact and we keep going!
#5YearsOfImpact


It was the summer of 2013, when Impact Hub Athens opened its doors on Karaiskaki Street in Psyrri. Our aim is to create a dynamic community of individuals and organizations that through business actions could have a positive social impact both in Greece and abroad through the global network of the Impact Hub. Since then, ideas such as "social entrepreneurship" and "social innovation" have sounded loud and the pursuit of positive social impact has entered the central social and political dialogue. And on that, we also contributed.

By establishing a collaborative space that has already hosted 700 members, we have satisfied the conditions for creative people to meet, connect, collaborate, co-create. Impact Hub Athens has been the starting point for about 200 socially oriented business initiatives that have been supported and have taken their first steps, while at the same time Impact Hub has acted as an incubator and as accelerator for 100 emerging social businesses. Moreover, through our actions, more than 600,000 € has been invested in social enterprises and 150 new jobs have been created.

The people we met all these years helped us shape our stigma while the moments that designated us are many and difficult to record. But if we wanted to distinguish some points, the following would be:

- The social economy exhibitions (1st & 2nd EXPO Κ.AL.Ο. November 2017, November 2018) organized together with the Ministry of Labor, Social Security and Social Solidarity, giving a substantial impetus to the cooperation and dialogue between the members of the Greek ecosystem of social entrepreneurship.

- The assignment of the management of the Kypseli Municipal Market, which came as a recognition of our experience in the development of active groups, the re-use of spaces, the positive imprint in the neighborhood we are participating in. In the Agora, with the main pillars of culture, education and, of course, social entrepreneurship, we promote social cohesion and citizen participation, and we have helped more than 200 vulnerable social groups.

- Collaboration with institutions such as Robert & Bosch and MitOst regarding the Kypseli Municipal Market which resulted in organizing the Cine-Mageiremata and the Super Kypseli, and will soon be developed into independent organizations. Also, the cooperation with WWF to implement programs that link entrepreneurship with environmental protection, and with Allianz to promote the social inclusion of children and young people. Furthermore, with the Onassis Stegi Foundation and the US Embassy in Athens for the program "Hack The Camp", which became thespringboard for creating new foundations in the lives of young refugees and the occasion to design new programs.

- The major European programs we participate in are dealing with serious social problems. One of them, HYDROUSA, provides innovative cyclical economy solutions for water management in the islands.

- The Kypseli Music - a program for children and young people using El Sistema's global methodology and music as a tool for social inclusion and empowerment of vulnerable social groups.

- And, of course, a top distinction: The IVLP Alumni Social Innovation & Change Award, awarded for the collective work of Impact Hub Athens, during the global meeting of Global Ties U.S. 2018 in Washington DC.

Having completed 5 impactful years, we welcome the “new era”. Anyone who is currently entering the Impact Hub Athens building and meeting the social entrepreneurs who have their office there, anyone who attends the events that take place here and participates in our actions, will acquire a very good preview of the modern and the dynamic that is currently happening in Greece, and will be in direct dialogue with the respective foreign communities.

And now, it is the moment, Impact Hub Athens community, that first talked about social entrepreneurship, to discuss,- with researchers from leading universities, creative professionals and actors from all over the world - what will determine the evolution of the social ecosystem in the next 5 years. It is the time to design along with the growing domestic community the guidelines for the next steps to maximize the positive social impact, the steps that will further affect social changes and will lead us over the upcoming 5 years.

On 28, 29 and 30 March 2019, during the # 5yearsofimpact, which will take place at Impact Hub Athens and the Kypseli Municipal Market, we will discuss what is currently occuring and will be crucial to us in the years to come in the areas of social innovation , urbanism, activism, technology and the cyclical economy.

What is emerging? Why is social innovation and entrepreneurship vital for the following 5 years? Where do we need to devote our potential and what are the most effective tools to contribute to positive change? Soon we will discover it together!