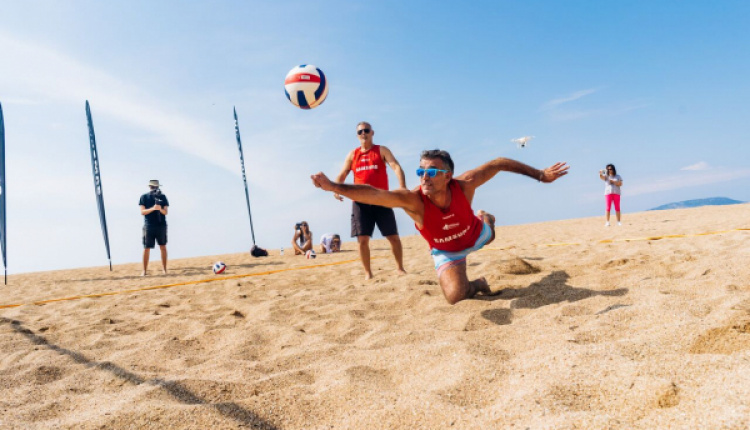 More than 2,500 people from 36 countries joined the annual sports event participating in 28 activities within 50 hours!

More than 2,500 professional and amateur athletes of all ages enjoyed a rich program of 28 activities. The event, hosted by The Westin Resort Costa Navarino , promoted the Olympic Spirit and “Fair Play” for another year, while supporting the fight against childhood obesity through exercise and the Mediterranean diet.

The full schedule of the event included activities for the whole family within 3 days. One of the biggest online gaming companies worldwide, Bwin, consistent with its efforts to enhance Greek sports, supported the event as the Grand Sponsor of this year's Navarino Challenge. By promoting actions of public good, Bwin recognizes the goal of Navarino Challenge, which is to raise awareness on the issue of childhood obesity and to promote physical and mental well-being through the message “sports unite people”.

On Friday, October 12, Bwin welcomed the participants of Navarino Challenge by organizing the Bwin Welcome Party with the voice of Penny Baltatzi, in retro swing and jazz music rhythms.

On Saturday, October 13, the swimming action was held in the Municipality of Pylos- Nestor that supported the event for another year and helped in the smooth implementation of the activities at Navarino Bay. The athletes covered the 2.8 km open water swimming race by Vikos, designed by the Federal Swimming Coach and technical director of the event, Nikos Gemelos. The race was held for the first time with timing and was completed with absolute safety with the approval of the Hellenic Swimming Federation and according to FINA’s open water swimming regulations, with the presence of major athletes of the Greek national open water swimming team such as George Arniakos, Dimitris Negris, Dejan Jovanovic, Anastasia Kyrili, Stellina Aplanti, Konstantinos Konstantineskou and Maria Kirykou, as well as George and Timos Skotadis, the twin Greek expatriates racing with the colors of the national team of Netherlands.

The swimming action also marked the beginning of the “Navarinia” event for the 191-year anniversary from the Battle of Navarino, which will culminate this week. All race results can be found here!

The event was a member of the Global Swim Series (GSS) which includes races from 37 countries around the world.

“Navarino Challenge” presented for the third time the Stand Up Paddling relay race by BIC® Sport . The fun course for SUP beginners and professionals was the best option for the acquaintance of the sport in the waters of the Ionian Sea. BIC® with its continuous presence in the field of water sports supported the event. The race was carried out with the support of the surf club, Surf Salad.

After the finish of the SUP race, a demonstration race with Optimist and Laser boats was held by the Maritime Athletic Pylos Association “Nestor”.

On Saturday night, the official airline partner Qatar Airways welcomed the guests on the special night “A Night to Remember by Qatar Airways”. On a splendid evening with the presence of Peloponnese Regional Governor Petros Tatoulis and Mayor of Pylos-Nestor, Mr. Dimitris Kafantaris, Qatar Airways honored great personalities from the global sports industry.

The event was presented by the legendary basketball player Joe Arlauckas with the actor Youlika Skafida and the talented musician Elena Charbila (Kid Moxie), under the jazz rhythms of the musician Adam Tsarouchis. Within the framework of the event honorable awards were given to successful athletes who have been distinguished worldwide.

During the event the following awards were given; the Olympic and European Champion at 400m. with hurdles Periklis Iakovakis was awarded by the Marketing & Communications Manager VIKOS SA Mrs. Natassa Krenz and Mayor of Pylos-Nestor Mr. Dimitris Kafantaris, the twice silver Olympic medalist in taekwondo Alexandros Nikolaidis was awarded from the President and Managing Director of Ford Motor Hellas Mr. Nikos Notaras while the ultramarathon Dean Karnazes was awarded by the Bwin representative Mr. Yannis Kapodistrias. Qatar Airways had another surprise, drawing a set of two airline tickets to any destination of its world network, while throughout the weekend Qatar Airways conducted a special contest for all participants through its special application created for the Puzzle Challenge game. Can be viewed here!
“A Night to Remember by Qatar Airways” was assisted by Kayak, Karoulias, Lafazanis, Nestor and Dimiourgies, while the specially designed awards of the event, which included names of ancient Messinian Olympic athletes, were created by Antonis Palles.

On Sunday October 14th , professional and amateur runners tried their best on the beautiful running routes of 5km (running & dynamic walking) 10km and the Ford Go Further Half Marathon (21.1km).

Starting from Navarino Dunes of Costa Navarino, professional and amateur athletes run along the coast to Pylos crossing the beautiful Voidokilia beach following the path that Telemachus traced to seek Odysseus according to the Homeric tradition. “Navarino Challenge” was included in World’s Marathons world community with runners from the Sport Club with people with special needs from Kalamata, “Diaforozo”, celebrating their participation at the event one day before the International White Cane Day (October 15th).

On the same day, children’s 1km run was held (with the support of VIKOS), with the dynamic presence of children from the wider region as well as clubs such as Messiniakos, GC Akritas 2016 and Maritime Athletic Pylos Association “Nestor”. The routes were designed and edited by the former marathon runner, holder of national best performance on the classical route, running coach and director of All About Running, Nikos Polias. The organization innovated, in its cooperation with LUANVI. The leading force in the field of sports apparel and accessories in Spain, as an official sports supplier of Navarino Challenge offered the special technical t-shirt of the event to all participants, which were decorated with the design of Voidokilia beach. The Ford Go Further Half Marathon was held with the participation of Dean Karnazes, while a special finisher t-shirt was offered with a design of Pylos Castle.

All running routes results can be found here!

The three-day schedule included activities such as: taekwondo (with Olympic medalist Alexandros Nikolaidis and the numerous participations of TaeKwonDo teams, among others, from Kalamata and Kyparissia), kids’ athletics (in Pylos and Costa Navarino with Periklis Iakovakis. An action that has been developed by a special panel of scientists from IAAF [International Association of Athletics Federation] and is officially implemented in Greece by the Hellenic Athletics Federation [SEGAS] in cooperation with the Ministry of Education), beachathlon (with Periklis Iakovakis), beach volley lessons by Samsung and King & Queen Beach Volley Tournament by Samsung (with Michalis Triantafyllidis and supported by Triantafyllidis Beach Arena), 4on4 basketball tournament (with the participation of the athletes Joe Arlauckas and Alexandros Nikolaidis) climbing and bike ride at Voidokilia by HSBC (supported by Navarino Outdoors), pilates (with physical education instructor, Mandy Persaki), golf by Qatar Airways (supported by Navarino Golf Academy), kick boxing (with champion Alexandros Nikolaidis), baby swimming and aqua aerobic (supported by Swim Academy and Red Swim Academy), group cycling (spinning challenge with Tess Arlauckas), tennis cross training (supported by Navarino Racquet Academy), boxing (with Christos Gatsis and supported by Vizantinos target sport club), high intensity training, beach yoga and crossfit (with Dimitris Moros and supported FitnessArt).

For the second consecutive year “Navarino Challenge” had Samsung as the event’s official technology partner. Samsung enriched the experience of those participating and attending the event with the innovative Samsung Galaxy ecosystem services such as the Samsung Galaxy S9 and S9+ coupled with the Gear 360 and Gear VR with unique content at 360 degrees, as well as the QLED TVs with their outstanding picture quality and stylish design.

For the days of the event, Samsung created a special Samsung Business Lounge and a Samsung Gaming Corner and offered endless fun, information and entertainment to the Navarino Challenge participants. At the same time, Samsung sponsored the Samsung King & Queen Beach Volley Tournament by Triantafyllidis Beach Arena that was held at Costa Navarino.

This year the event also innovated with its “Live the Challenge” campaign implemented on Instagram during the days of the event, presenting the participants’ experience in real- time and POV content.

For another year Vikos SA as an official sponsor spread the message of sporting energy with the natural mineral water “Vikos”, offering the necessary hydration and revitalization to all participants. The natural mineral water “Vikos” offers the necessary balance, well-being and energy that the athletes need during their exercise in order to be able to continue their efforts.

Surprises didn’t stop here… as the all-new Ford Focus came in Navarino Challenge 2018! Ford Motor Hellas promoted sports and “fair play” as the event’s official sponsor and supported the efforts of the fight against childhood obesity while promoting healthy diet by participating for another year in the support team of “Navarino Challenge”. For the fifth consecutive year, athletes and organizers moved with the safety and efficient engines of the cars of Ford Motor Hellas.

Navarino Challenge cooperared for the first time with HSBC, one of the world’s largest banking and financial services organizations. As an official banking partner, HSBC supported this year's event, conducted a contest and was the exclusive sponsor of the bike activity (Bike ride at Voidokilia by HSBC).

Official supporter of the event were: Pylos-Nestor Municipality, Poseidonia, Navarino, BIC®, BIC® Sport, Avance and Hippophae of Meteora Hippocrates Farm. Athens Medical Group was the Medical Partner of the event for the first time. Fysiotek Sports Lab took care as the event’s partner the recovery of athletes in the challenging running races.

National Geographic was the event’s strategic partner for another year. Athens Easy Transfers assisted the event in all transfers of its VIP guests. The event was assisted by Target Security, The Diner, Hellenic Recovery Recycling Corporation, Anazoe Spa, Kayak, Collective Resort, Department of Sports Organization & Management from University of Peloponnese (with its numerous and dynamic team of volunteers), Karalis City Hotel & Spa, Karalis Beach Hotel, Kessaris, Hellenic Athletics Federation (SEGAS), IAAF Kids Athletics, Tsamis, Lafazanis and Nestor.
More than 250 people worked in the event’s production and more than 500 employees at The Westin Resort Costa Navarino and The Romanos, a Luxury Collection Resort, Costa Navarino, took care the hotel accommodation and service of Greek and foreign participants. Navarino Challenge was co-organized by Costa Navarino , The Westin Resort Costa Navarino and Active Media Group with the support of the Municipalities of Pylos-Nestor and Trifilia. Navarino Challenge took place under the auspices of the Greek National Tourism Organization, with the approval of the Hellenic Swimming Federation.