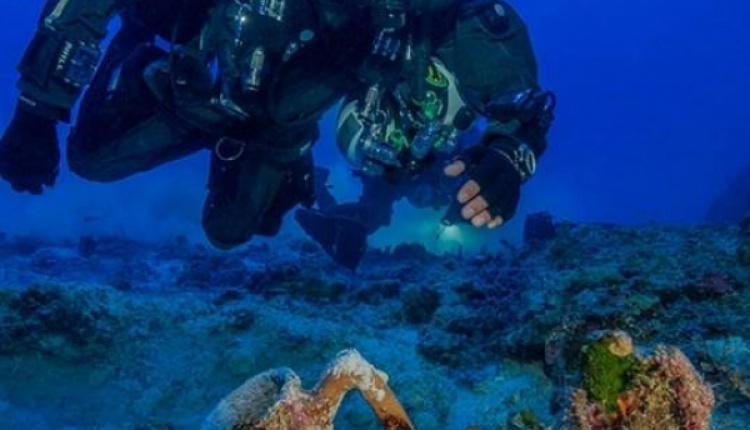 A bronze chair arm — possibly the remains of an ancient throne — and a piece of a Greek board game are among the latest treasures raised from the site of the famous shipwreck Antikythera.

The ship, which went down in 65 B.C., sits off the coast of the Greek island of the same name. It was discovered in 1900 by sponge fishermen and has been periodically studied since.

This year, archaeologists discovered an intact amphora (a vaselike container), a small table jug (known as a lagynos) and a rectangular chiseled stone, probably a statuette base. Digging on the seafloor, they found broken ceramics, a piece of a bone flute, and broken bits of glass, iron and bronze. A section of bronze furniture may be the arm of a throne, according to the Woods Hold Oceanographic Institution (WHOI). A small glass piece looks to be a pawn in a chesslike game.

"This shipwreck is far from exhausted," project co-director Brendan Foley, a marine archaeologist at WHOI, said in a statement. "Every single dive on it delivers fabulous finds, and reveals how the '1 percent' lived in the time of Caesar."

The first sponge diver to explore the wreck in 1900, Ilias Stadiatis, managed to bring a bronze arm from a statue up 164 feet (50 metres) to the surgace.  The Greek government quickly sent naval support to the area, and divers brought up to 36 marble statues of heroes and gods, along with other luxury items and skeletons belonging to the crew and passengers.  In 1901, the divers brought up an incredible astronomical calendar, the Antikythera mechanism, which could determine the positions of heavenly bodies like Mercury, Venus and Mars.  It remains the most complex ancient item ever found, according to the Hellenic Ministry of Culture and Sports.