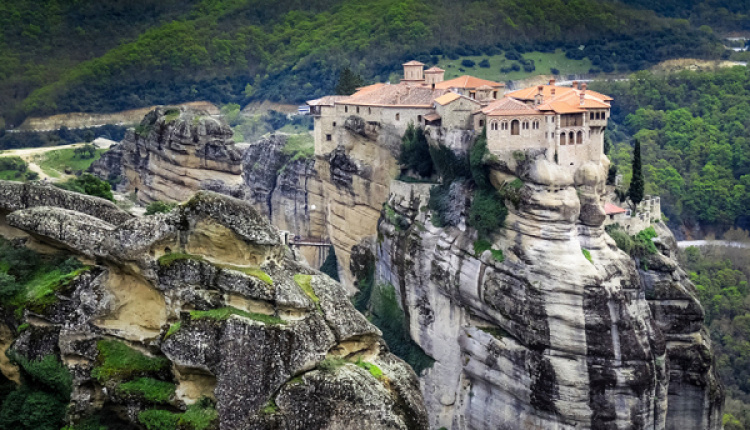 Meteora is an area in Thessaly (Central Greece) and Kalampaka is the city under the rock towers of Meteora. The thing that makes Meteora so special is the monasteries on the top of the rock towers. The monasteries, the amount of peaks to climb and the paths for hiking brings in Meteora the whole year many tourists.

The Monasteries of Meteora may be visited year round but the weather is wet and cool from December to March. Crowds and high season rates are guaranteed from July 1st to October 15th. May and June are the best months for comfortable weather, low season rates and the opportunity to leisurely explore the area.

Buses to Kalampaka are available from Ioannina, Trikala, Thessaloniki and Athens. It is also possible to take the train from Thessaloniki or Athens with a switch at Larissa. If you are traveling from Athens, take a morning train so that you can enjoy the spectacular scenery as you pass through the mountains between Livadia and Lamia.

Appropriate clothing is required to visit the monasteries. Sleeveless clothing and shorts are prohibited. Skirts and shawls are available at the entrance for those who are deemed to be unacceptably dressed (including guys wearing shorts and tanktops).

A visit to the Monasteries of Meteora is highly recommended. Each monastery charges a small admission fee. The nearby towns of Kalampaka and Kastraki have become very touristy with accompanying higher rates than the outlying areas. We suggest combining a trip to Meteora with another destination such as Zagoria or the Halkidiki peninsula. If you do not plan to travel to other areas in northern Greece or if your time is limited, the most efficient way to visit Meteora is to take a bus tour from Athens. You can usually negotiate a good deal with any of the several travel agencies to be found around Syntagma Square.

The village of Kastraki is closer to the monasteries and convenient for those who want to visit by foot but there are more options for food and lodging in Kalampaka.