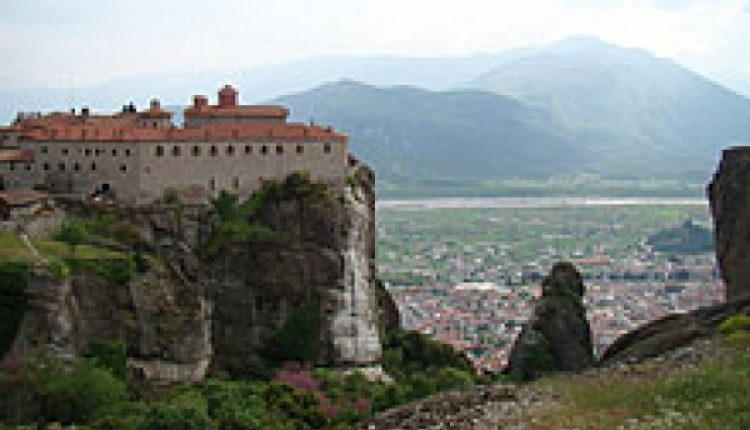 Meteora is a formation of huge dark colored rocks that constitute a geological phenomenon of unique beauty as well as an important monument of the Orthodox religion. The rocks are virtually ‘suspended’ (the meaning of the Greek word: meteora). Some of them reach 400 m above the plain, and on their peaks there are orthodox monasteries. It is one of the largest complexes of monasteries in Greece, second only to Agion Oros (Mount Athos).

In 1989 the UNESCO included Meteora in its World Heritage List, as a place of special cultural and physical significance.

The first monks arrived there in the 12th century and lived isolated in rock caves. The first monastic communities were founded in the mid 14th century.
In many monasteries you will admire masterpiece hagiographies and you will see treasures, manuscripts, jewels, Gospels and ornaments.
Information:

One can reach Meteora from Kalampaka, which is 20 km far from Trikala.

In the past the inhabited monasteries on Meteora were 30, to many of which the access was through rope ladders. Today there are only six monasteries that are inhabited and some smaller ones.

The six monasteries that remain today are:

One can also visit the following monasteries: