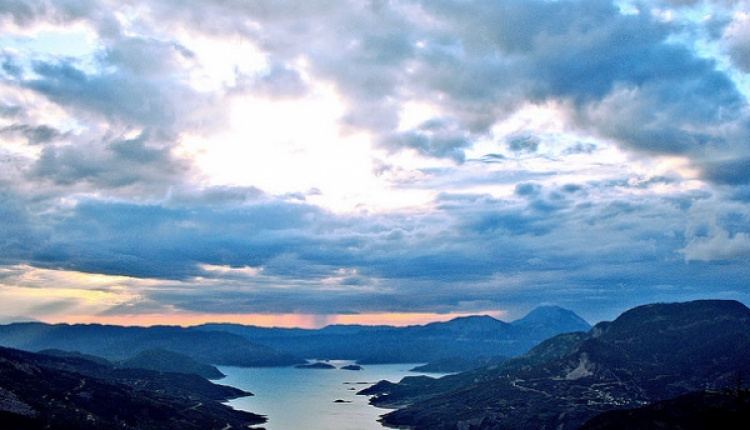 Rugged scenery, endless fir forests and an invigorating climate are among the many assets of the district of Evrytania, at the southern end of the Pindos mountain range. It is associated with images of an ideal winter holiday perhaps more than any other destination in the country: snow-covered mountain slopes, rushing waters, stacks of logs and smoking chimneys. However Evrytania is also pleasant for cool escapes in summer, when city dwellers flock back to their family homes in the villages.

During the Byzantine period the district enjoyed privileges of autonomy and tax exemption. For this reason the northern part of the district was also called “Agrafa” (literally “unwritten”), because the residents were not included in the imperial tax registers.

The wild landscape, which helped keep central authority and aspiring occupiers at a distance, nowadays also offers many options for alternative tourism activities. Skiing at Velouchi and rafting on the rapids of the Acheloos, Trikeriotis and Tavropos rivers have been the sports that have catapulted the district’s largely untapped tourism potential to popularity in the last two decades.

The part of Evrytania which is best known and most popular with tourists lies on the road axis between Karpenisi, the main town, and the historic Monastery of Proussos -- perched like an eagle’s nest atop a precipitous cliff above a gorge. Cameras should be at the ready to capture the highlights of the route, especially Kleidi, the narrowest point of the gorge from where the monastery is first visible.

Karpenisi, a town of less than 10,000 people at 1,000 meters on the slopes of Mt Tymfristos, is the base for most activities in the area. Lying on the route to Proussos are the well-known picturesque villages of Mikro and Megalo Horio and the listed settlement of Koryschades. It was this latter village that hosted the elected National Assembly during the German occupation, on May 7, 1944 and has a Museum of National Resistance.

Fidakia, 17 kilometers from Karpenisi, is one of the most beautiful villages in Evrytania, with a fine view of the Kremasta reservoir. Just outside the scenic village of Klafsi, in the Potamia valley, is the unique 5th- to 6th-century Basilica of Aghios Leonidios, with an exquisite, well-preserved mosaic floor.

The main village of Proussos, at the edge of the tourist zone, is best known for the reportedly miraculous icon of Our Lady of Proussos in the monastery, which attracts thousands of visitors annually and can be congested at weekends, especially Sundays.

An easy hiking route, lasting about two hours, takes walkers from the monastery to Mavri Spilia (“Black Cave”) -- next to a waterfall -- which was used as a hideout by guerrillas in years gone by. The more adventurous can rappel down the cliff face. A second route in the area, beginning from the village of Aniada and lasting about an hour and a half, takes in the slopes of Mt Kaliakouda. Part of it runs alongside the Trikeriotis River before it ends at the Pantavrechi waterfalls.

Aghios Nikolaos, 6 kilometers from Karpenisi, is a charming village known for the most prolonged snow cover in the district and its chestnuts.

A fine route through dense fir forest on the slopes of Mt Oxya is from Karpenisi to the beautiful mountain villages of Krikello and Domnista, if you take a right turn from the road to Lamia going east. As you enter Krikello, at 1,120 meters, you will see five stone fountains gushing the icy waters of Mt Oxya. Domnista has some huge plane trees and an impressive folk museum which also hosts local ancient finds. The village also features a monument to the national resistance, as it was here that resistance leader Aris Velouchiotis proclaimed the armed struggle against the Axis occupiers on June 7, 1942.

Lastly, it is worth seeing the Bridge and Monastery of Tatarna, in a beautiful area near the Kremasta dam. The view of the lake from the bridge, which has won three architectural awards, is superb and the monastery houses a number of precious icons.