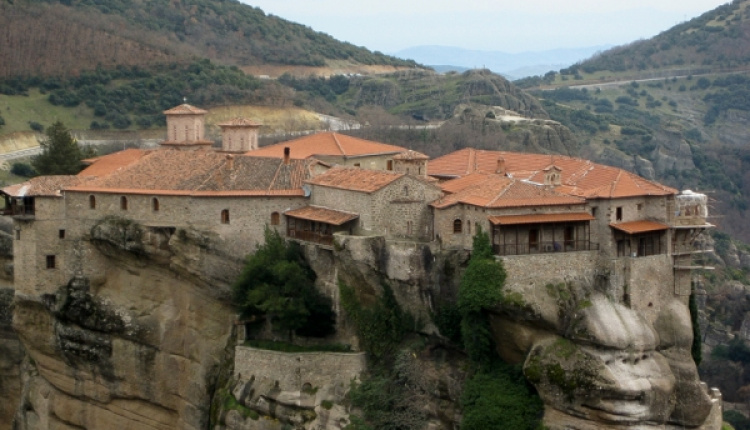 Metéora (Greek: Μετέωρα, “suspended in the air”) is an outstanding complex of giant rock formations near the town of Kalambaka, in the district of Thessaly. The rocks rise over 400 metres above Kalambaka and the valley of river Peneus. It is still unclear how these rocks were formed, but it is estimated that this happened approximately 60 million years ago.

The most prevalent theory about their formation is through a big river that brought geological material, such as rocks, stones and minerals, to the region. Continuous weathering by rain, wind, as well as earthquakes, gave them their present shape. It still remains a mystery, though, why such a unique place is not mentioned anywhere in the Greek mythology and why no Greek or foreign historian has written about it.

Between the 10th century and today 30 monasteries of admirable architecture have been built on these natural sandstone rock pillars, but only six of them remain in a good condition and house religious communities nowadays. For centuries, these monasteries were almost inaccessible, and the monks climbed to the top of Metéora, using rope ladders fixed to the rocks with the aid of wooden poles carefully positioned in rock cracks. The supply of the monasteries was done using nets that hauled up food, water and other necessary goods, as well as people. It was only in the beginning of the 20th century that steps were carved into the rock and facilitated the access to the monasteries. During the World War II, the region of Metéora was bombed and many art treasures were stolen.