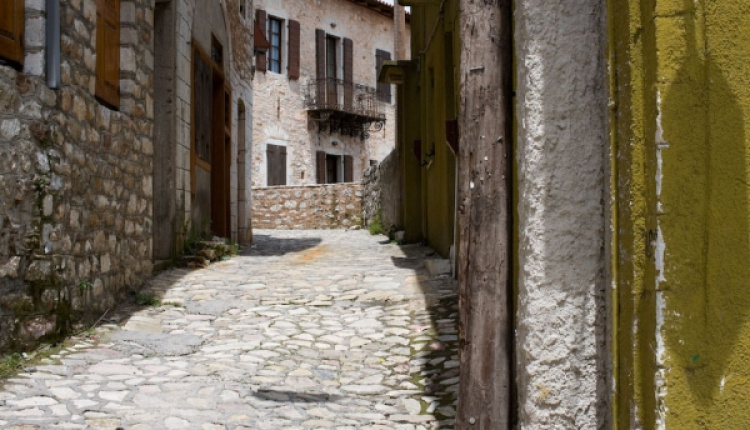 Dimitsana (Δημητσάνα) is well known in Greece as a popular winter destination but is certainly not on the radar of the majority of foreign tourists. It is located 3 hours by car from Athens in the Peloponnesian district of Arkadia and at an altitude of 1000 meters, which means it can see a fair bit of snow during the winter months.

Dimitsana’s stone built houses, lovely mountain scenery and its history as the engine of the Greek independence movement in the early 1800s make it a fascinating place to spend a few days.

Things to do in Dimitsana
Dimitsana was a commercial center in the 18th century and flourished during the years up to and including the Greek war of independence in 1821. Its position on the Lousios Gorge meant that water was available to power mills that were involved in the production of flour, animal skins, metal works and (most importantly) gunpowder. Without the gunpowder mills of Dimitsana (evidence suggests up to 14 operated in the village and surroundings) the Greek freedom fighters would have been doing a lot less fighting. The Lousios Gorge also hides a number of secluded monasteries along its walls that became centers of resistance and education during those years. A number of celebrated Greek resistance fighters and Patriarchs made their home in Dimitsana and/or the nearby monasteries and today Dimitsana is home to two small museums celebrating its illustrious past, the Ecclesiastical Museum and the Town Library.

Ecclesiastical Museum
Dimitsana’s own homegrown son is none other than Ecumenical Patriarch of Constantinople, Grigorios V. His house just off the main street has been restored and made into an Ecclesiastical museum holding treasures from the churches of Dimitsana and the surrounding monasteries. Most pieces are from the eighteenth and nineteenth centuries and include a several representative sample of icons produced by seventeenth century artists in Crete. Take note, the museum is only open Saturday and Sunday in the winter time 09:30 – 13:30.