Epidavros – A Quick Day-Trip from Athens 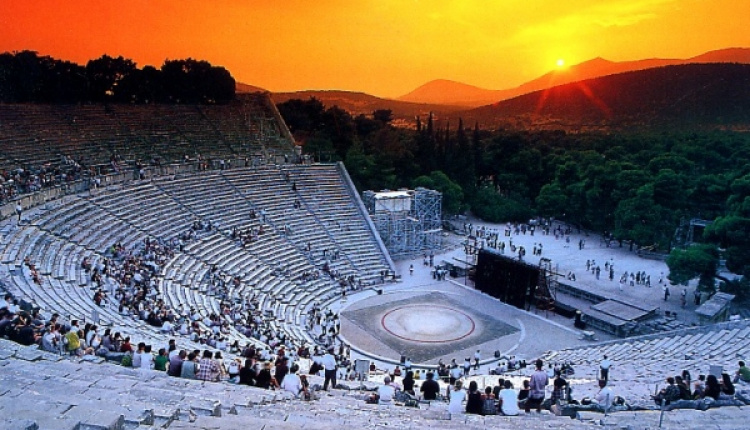 Amidst the blue of the Saronic Gulf, well protected on its own smaller gulf, where the scent from the valley's orange blossoms meets the sea breeze in its picturesque friendly port, Ancient Epidavros, traditional yet modern, both tranquil and cosmopolitan, is always ready to welcome travelers whatever the season. Midway along the east coast of the Argolida district, easy to reach by highway via the Corinth Canal, the little town is built on the site of the ancient city-state of Epidavros.

Quiet pleasant people, occupied in fishing, tending orange groves and tourism, a mild climate, beautiful surroundings and a sound infrastructure provide the framework for all that one needs for a quick get-away from Athens.

Its sheltered location and natural surroundings, the beauty of the landscape and fertility of the soil, attracted not only men but also gods. It was here that Asklepios' most splendid sanctuary was situated. Here yet another important nucleus of ancient Greek civilization was created.

The first inhabitants of the area were the Carians and then later the Dorians. The city took part in the Trojan War; it fought against the Persians at Plataea and Salamis and found itself on the side of the Spartans in the Peloponnesian War. Good sailors and merchants, the people of Epidavros founded colonies and raised their town to a high level. Their civilization came to light during excavations on the peninsula that bisects the Bay of Epidavros, the "island" as the locals call it today.

We can find remains from the Acropolis with Roman walls, ruins of a palace and houses, columns from the Doric temple and nearby, Mycenaean tombs; while under the sea, not very deep, lies a section of the ancient city. Its jewel however can be found on the west side of the peninsula: the ancient theatre, or the "little one”, as it has been dubbed, to distinguish it from the "big one” in the Sanctuary of Asklepios. Built in the 4th century BC, it was dedicated to Dionysos, but for centuries remained buried under six meters of earth. In 1971, archaeologists began their digs. And today, elegant with its stone seats, it not only reaffirms the achievements of ancient civilization it also plays host to marvelous concerts.
Some Ancient History

Epidaurus was independent of Argos and not included in Argolis until the time of the Romans. With its supporting territory, it formed the small territory called Epidauria. Reputed to be the birthplace of Apollo's son Asclepius, the healer, Epidaurus was known for its sanctuary situated about five miles (8 km) from the town, as well as its theater, which is once again in use today. The cult of Asclepius at Epidaurus is attested in the 6th century BC, when the older hill-top sanctuary of Apollo Maleatas was no longer spacious enough.

The asclepieion at Epidaurus was the most celebrated healing center of the Classical world, the place where ill people went in the hope of being cured. To find out the right cure for their ailments, they spent a night in the ‘enkoimeteria’, a big sleeping hall. In their dreams, the god himself would advise them what they had to do to regain their health. Found in the sanctuary, there was a guest house for 160 guestrooms. There are also mineral springs in the vicinity which may have been used in healing.

The prosperity brought by the Asklepieion enabled Epidaurus to construct civic monuments too: the huge theatre that delighted Pausanias for its symmetry and beauty, which is used once again for dramatic performances, the ceremonial Hestiatoreion (banqueting hall), baths and a palaestra. The theater was designed by Polykleitos the Younger in the 4th century BC. The original 34 rows were extended in Roman times by another 21 rows. As is usual for Greek theatres (and as opposed to Roman ones), the view on a lush landscape behind the skênê is an integral part of the theatre itself and is not to be obscured. It seats up to 15,000 people.

The theatre is marveled for its exceptional acoustics, which permit almost perfect intelligibility of unamplified spoken word from the proscenium or skênê to all 15,000 spectators, regardless of their seating. Famously, tour guides have their groups scattered in the stands and show them how they can easily hear the sound of a match struck at center-stage. A 2007 study by Nico F. Declercq and Cindy Dekeyser of the Georgia Institute of Technology indicates that the astonishing acoustic properties are either the result of an accident or the product of advanced design: The rows of limestone seats filter out low-frequency sounds, such as the murmur of the crowd, and amplify/reflect high-frequency sounds from the stage.