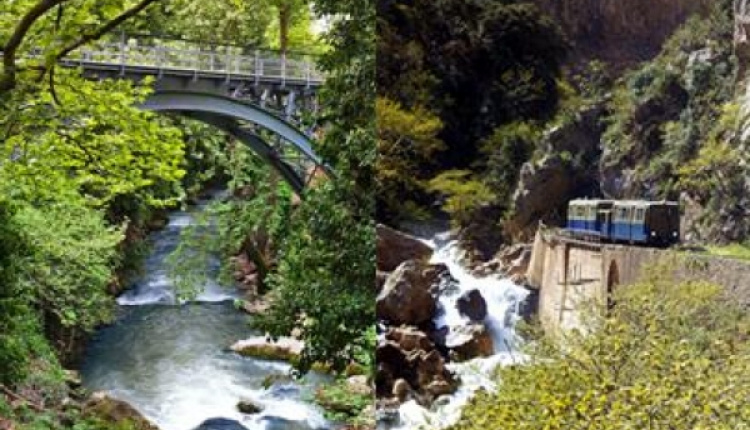 The Vouraikos gorge is a fantastic landscape of towering pinnacles and precipitous rock walls that you can view on an exciting train ride. In addition, a road goes directly from Diakofto to Kalavrita; the spectacular 25-km (15-mi) drive negotiates the east side of the gorge. Diakofto is a peaceful seaside settlement nestled on a fertile plain with dramatic mountains as a background; the village straggles through citrus and olive groves to the sea.

If you're taking a morning train up the gorge, plan on spending the night in Diakofto, maybe enjoying a swim off one of the pebbly beaches and a meal in one of several tavernas.

After dinner, take a stroll on Diakofto's main street to look at the antique train car in front of the train station, then take a seat at an outdoor table at one of the cafés surrounding the station square and enjoy a gliko (sweet). This is unembellished Greek small-town life.

The Kalavrita Express, an exhilarating narrow-gauge train ride, makes a dramatic 25-km (15-mi) journey between Diakofto and Kalavrita, which is a refreshingly cool retreat in summer and a ski center in winter. Italians built the railway between 1889 and 1896 to bring ore down from Kalavrita, and these days a diminutive train, a diesel engine sandwiched between two small passenger cars, crawls upward, clinging to the rails in the steeper sections with a rack and pinion, through and over 14 tunnels and bridges, rushing up and down wild mountainside terrain. Beyond the tiny hamlet of Zakhlorou, the gorge widens into a steep-sided green alpine valley that stretches the last 11 km (7 mi) to Kalavrita, a lively town of about 2,000 nestled below snowcapped Mt. Helmos. Greeks remember Kalavrita primarily as the site of the Nazis' most heinous war crime on Greek soil. On December 13, 1943, the occupying forces rounded up and executed the town's entire male population over the age of 15 (1,436 people) and then locked women and children into the school and set it on fire. They escaped, but the Nazis later returned and burned the town to the ground. The clock on the church tower is stopped at 2:34 pm, marking the time of the execution.

The Kalavrita Express makes the round-trip from Diakofto four times daily. The trip takes about an hour, and the first train leaves at 7 am. Comings and goings are timed so that you can do some exploring; in a day's outing, for example, you can alight at Zakhlorou, make the trek to Mega Spileo, continue on to Kalavrita, explore that town, and return to Diakofto by the last train of the day. Check with the EOT in Athens to make sure the train is operating—repairs can close the line for months at a time; the Chris-Paul hotel is another good source of information.