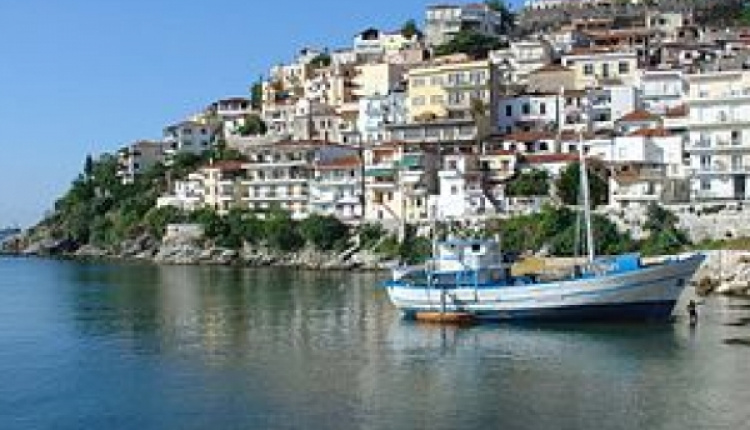 The Monte Carlo of Greece, Greece’s Hidden Gem, The Blue City; just a handful of well deserved names which are often used by locals to describe the totally unspoilt and authentic city of Kavala which, in its amphitheatric setting, overlooks the Aegean Sea and the Island of Thassos, a forty five minute ferry trip away. Kavala is located in Macedonia, Northern Greece, approximately one hundred and sixty kilometers from Thessaloniki.

It is ideally located for access to Halkidiki, day trips to Thessaloniki, has a very reliable ferry network for Thasos, Lesvos, Samos and Samothraki and is just a twenty minute drive from the mountainous region of Pangaio, well worth a visit for its natural beauty including large expanses of forest, as well as for its monasteries and skiing during the winter.

The reason why people refer to Kavala as the Blue City is clear; the dramatic old town is built upon a rocky headland which is surrounded by the blue and turquoise colours of the Aegean, creating a stunning backdrop for a city and reflecting the Mediterranean sun onto the colourful houses.

The old town of Kavala was formerly a colony of Thasos and called Neapolis. It was significant both strategically and economically due to its proximity to the road which connects Thrace and Macedonia. It has been discovered that the first inhabitants of Neapolis came from Paros and Thasos. Being ideally positioned to confront invasions from Thrace, Kavala also functioned as a very important port linking the west and the east. This role would have begun around 650 BC. The city’s name then changed to Christoupolis under Byzantine rule and Kavala under Turkish occupation. Historically, Kavala has functioned as an important base for the tobacco trade, a key fishing port as well as being suitably located for the movement of gold from the Pangaio Mountain.

Upon visiting Kavala, one realises immediately how the development through many periods of history has created the modern city of Kavala, with constructions such as the Town Hall, a combination of traditional Greek and neoclassical architecture and the houses in the area of Panagia which were built by Greeks, Jews and Turks in the early twentieth century. The most symbolic constructions, however, are the Fortress (Frourio) and the Aqueduct (Camares), built by the Turks and the Venetians in AD 1425.

Kavala has an array of things to see and do, with a long coastline of white sandy beaches which begin at the ammolofoi, an area of sand dunes backing onto the region of vineyards just under twenty kilometres west of Kavala. As one heads closer towards the city, the fishing village of Iraklitsa offers a variety of Tavernas, all of which offer high quality seafood and mezedes, mainly catering for the local market. One of the most popular is Taverna Odysseas, located on the village promenade overlooking the small harbour.

The main road from Iraklitsa to Kavala meanders along the coastline between the mountains and the sea, with a continuous view of Fidonisi (Snake Island) and Thassos in the distance. (Photo-above left)

The most obvious place to visit in the city of Kavala is of course the fortress, with frequent live music performances as well as plays taking place during the summer, many of which are free of charge. Access to the fortress is through a cobbled street which runs through the old town past the old Turkish style houses.

In the local area any inquisitive visitor would find it hard to resist the urge to visit the ancient site of Philippi, one of the most important towns of Eastern Macedonia which had important privileges during Macedonian rule. However, the Battle of Philippi in 42 BC would lead to its transformation into a completely Roman town. The Apostle Paul baptized Agia Lydia, the first Greek female and European to be baptized by him, just a few minutes walk from Philippi.

For those with access to a vehicle, the region of the Nestos River is not to be missed due to its absolutely stunning natural beauty. (Photo-above center)

In all, Kavala can be described as a highly varied holiday destination with something to cater for the demands of every individual, ranging from beaches with crystal waters to Tavernas with live music as well as ancient sites and mountain hikes. What is more, this is a truly Greek working city and visitors will experience an authentic Greek way of life rather than any artificially created environment to cater specifically for tourists.