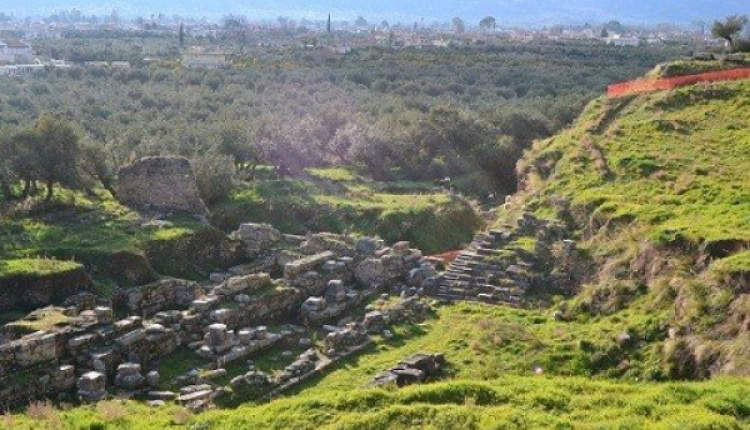 After having seen Athens and Corinth, I couldn't resist visiting one of the other great city-states of ancient Greece: Sparta. Sparta needs no introduction. It's a star player on the History and Discovery channels and that schlocky pseudo-historical film 300. While I wanted to see the ancient ruins where brave warriors once strode, my main reason for going was to explore nearby Mistra, a Byzantine ghost town with a castle that rivals Acrocorinth.

Sparta is a three-and-a-half hour bus ride from Athens. The route passes along the Aegean shore, through the Isthmus of Corinth, and into the Peloponnese, the peninsula that makes up southwestern Greece. Passing Corinth, the road ascends into rough hills that were being buffeted by a snowstorm.

Luckily the roads were in good condition and I made it on time. The clouds were breaking over the Vale of Sparta although it remained bitterly cold. My first stop was at the Fifth Ephorate of Byzantine Antiquities to learn more about how the economic crisis was affecting archaeologists' ability to explore and preserve Greece's past. The Ephorates are divided by region, in this case Lakonia, roughly the central and southern Peloponnese, and also by period. There's a Fifth Ephorate of Prehistoric and Classical Antiquities too.

Archaeologists Lygeri Nikolakaki and Ageliki Mexia greeted me in their cramped office overflowing with books, reports, and maps. They spread out several maps in front of me to demonstrate just how rich their area was in medieval remains. Castles, churches, monasteries, and medieval towns dotted the landscape. This area was called the Morea in late Byzantine times and was one of the few centers of wealth, art, and learning during the waning days of the empire in the 14th and 15th centuries.

One region caught my eye--the Mani peninsula. The Ephorate has recorded some 2,000 Byzantine and post-Byzantine monuments on the peninsula, and the map showed hiking trails crisscrossing the area. The Maniots were always semi-independent, fierce fighters and pirates who never fully submitted to the Greeks, Romans, Crusaders, or Byzantines. Their culture remains distinct even today. As I was researching this trip I was already planning another one.