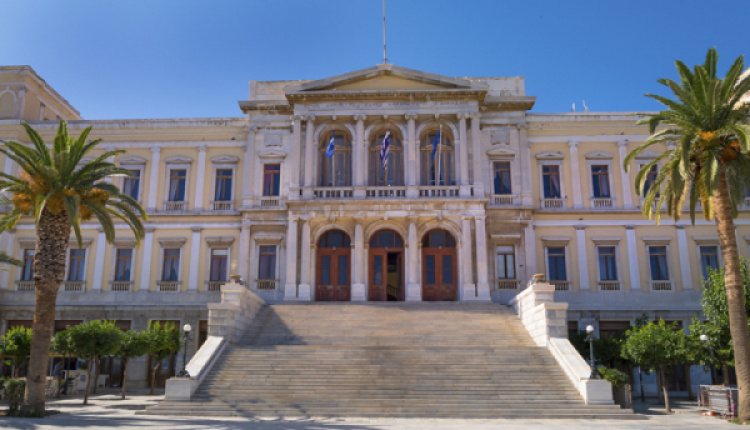 There is an island in Greece that is cosmopolitan and Cycladic, stately and traditional, Orthodox and Catholic at the same time! Syros, the capital of the Cyclades, is an island with many faces.
Even Ermoupoli, Syros' capital, has a dual identity. Ermoupoli is stately and grand, topped with an Orthodox church, while above it, Ano (Upper) Syros is a typical Cycladic village, crowned with Catholic monasteries and churches.
The beautiful amalgamation of marble-paved squares, exquisite mansions, traditional settlements, and crystal clear beaches bestow Syros with a unique, elegant character that can't be seen anywhere else in Greece.
Syros is a year-round destination; in fact, it is a place you could live in throughout the year, so much is there to do!

7 Things To See And Do On Syros

The neighborhood of Vaporia in Ermoupoli is where the island's captains of industry built their beautiful townhouses, all with sweeping views to the sea. Step inside the blue-domed church of Agios Nikolaos to find an interior that reflects its patrons' wealth: a marble icon screen and pulpit, and chandeliers brought in from Trieste.

Ermoupolis is the bustling yet elegant port town of Syros. Marble flagstones pave its spacious main square, home to the majestic Town Hall, one of the 19th-century masterpieces of Ernst Ziller, the famous Saxon architect who became a Greek national. Graceful, neoclassical buildings emit an aura of old-world charm. Buildings such as the restored Apollo Theatre (a miniature of La Scala in Milan), the Hellas Club, and the Pallas cinema are perfect examples of yesterday's elegant urban architecture.

The loukoumia from Syros(also known as Turkish Delight in English) are soft and chewy, flavored with rosewater, mastic, bergamot, pistachios, and almonds. According to locals, the water, not the sugar nor flavorings, makes them so delicious. Be aware that they are addictive, so don't forget to take plenty with you when you leave.

In contrast to Ermoupplis, Ano Syros has all the features of a typical Cycladic village. Its white cubist houses are nestled on a steep hillside, linked by narrow alleys and occasionally opening up onto spectacular terraces. Two things make Ano Syros unusual: the catholic monasteries and the Cathedral of Saint George on its summit and the bouzouki tunes of famous musician Markos Vamvakaris that can still be heard in its shops and squares. A native of Syros, Vamvakaris was one of Greece's greatest rebetika (blues) musicians.

Remember these names: Galissas, Delfini, Kini, Finikas, and Dellagratsia, where the island's elite built their splendid summer villas. Their serene landscapes, sheltered water, and pretty coves are ideal for a tranquil family holiday.

Part of Syros' former industrial district has been transformed into a museum. Wander among its buildings to see permanent exhibits related to its history and its shipping and industrial heritage.

Grammata in Greek means letters, and at Grammata Bay in northern Syros, there are letters carved on the rocks. Generations of seamen washed up on this isolated coast and inscribed their wishes, prayers, and names on them. Most of the carved letters date back to the Roman and Byzantine eras. You can reach Grammata Bay by boat or on foot.


To learn more about the island of Syros, please visit: discovergreece.com