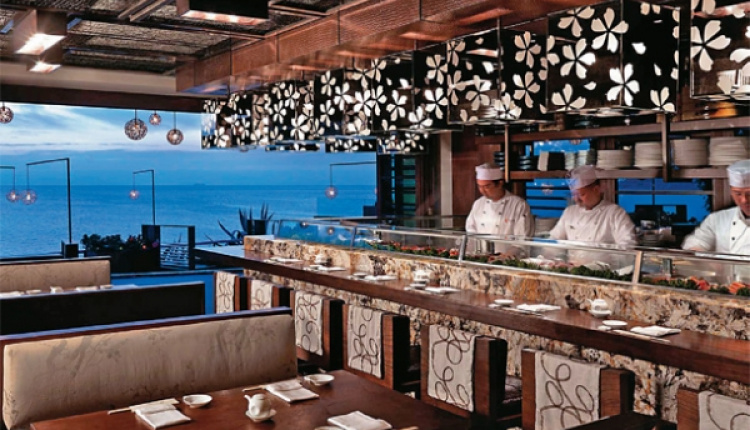 Japanese miso, Peruvian chilli and Greek salad: newly-opened Matsuhisa Athens promises Nobu classics with a difference. “You can tell how much fun a city is going to be if Nobu has a restaurant in it” Madonna reportedly once said. Well, the queen of pop just missed it, but Athens can now count itself among Europe’s five ‘most fun’ cities, with the opening of Nobu Matsuhisa’s restaurant at the Astir Palace Hotel complex in Vouliagmeni. Serving exquisite Japanese food with South American influences to an A-Z of the world’s movers and shakers, from the Beckhams, Cruises and Clintons to, of course, Madonna, and more Russian oligarchs than you can shake a samovar at, chef Nobu Matsuhisa’s stable of restaurants, co-owned by Robert De Niro, numbers more than 20 high-end eateries in LA, New York, Hawaii, Hong Kong, London, Milan, Melbourne, Mykonos, St Moritz and, most recently, Athens.

Matushisa Athens, a no-expenses-spared shrine to haute cuisine crowning the lush Astir Palace peninsula, has been quietly open for business since the end of October, but was officially launched on November 26 with a traditional sake ceremony hosted by Nobu himself.

Gregarious and approachable, Nobu seemed thrilled with his Athens outpost. “It’s a beautiful location and a beautiful restaurant” the youthful 59-year-old told journalists at the following day’s press lunch. “It’s pure, with the open terrace, sea view and fresh air. I went for a walk around and saw a lot of pines. ‘Matsu’ means pine, and ‘hisa’ means forever. So I thought, ‘Wow’, perfect match!”.

While the sake ceremony guests enjoyed first-class finger food such as spicy tuna rolls and fried rock shrimp puffs with japaleno sauce, the journalists were treated to an omakase [chef's choice] feast created by Mark Edwards, executive chef at all Nobu restaurants outside the US, ten and counting as Moscow opens in January, followed by Mexico City and Cape Town.

Nobu’s South American influence dates from a spell in Peru before opening his first restaurant in Los Angeles in 1994. As his restaurant empire extends across the globe, his menu is augmented with local elements and ingredients: since the opening of Matsuhisa Mykonos in 2003, his menu has included ‘Greek-style ceviche’, featuring shrimps accompanied by cubes of feta, tomato and cucumber and ‘new-style white fish’ sashimi, cut local seabass with a hot olive oil and Japanese lemon juice dressing that emulates Greek ladolemono [oil mixed with lemon].

Every Nobu plate is as compact, elegant and immaculately balanced as a haiku poem. The nugget of black cod [Alaskan sablefish] in its butterscotch jacket of miso is encircled in a bamboo leaf pinned at the peak with a splinter-thin matchstick, with four perfect orbs of yuzu [lemon juice] and miso sauce at each corner of the plate, and a nubile stem of pink ginger with which to refresh the palate after the sweet fish.

The design of the restaurant, by Rockwell Group of New York, is hardly less impressive. The interior is all dark wood, opulent marble slabs and gold lattice lanterns, while full-length windows give onto a pine-fringed bay gently traversed by fishing craft. “The concept was understated, timeless luxury” explained Tasos Ioannidis who, with his brother Nikolas, manages Matsuhisa Athens and owns the two seasonal Matsuhisa restaurants in Mykonos at their Belvedere Hotel and St Moritz. “Because the space is so beautiful in itself, in terms of location and view, we didn’t want to interfere or detract from that”.

Of all Nobu’s restaurants, Nobu London on Park Lane is perhaps the most infamous, dubbed “No knickers Nobu” by British tabloids after Boris Becker’s mistress revealed that the tennis ace’s illegitimate child was conceived during a post-sushi coupling in one of the restaurant’s cupboards.

More recently, Nobu was at the epicentre of another scandal, bluefin tunagate, when Greenpeace revealed that the chef’s three London restaurants were serving critically endangered bluefin tuna. Although not illegal, most of Nobu’s competitors no longer serve this species, numbers of which have been decimated by 90 percent in the last 30 years mainly due to overfishing for sushi restaurants.

Asked whether Athenian diners might inadvertently find themselves consuming bluefin tuna sashimi, which Greenpeace compares with eating tiger steak or a gorilla burger, Ioannidis responded: “We’re trying to avoid it. In London it definitely isn’t being served any more. Nobu is trying to find new species instead, species that do not face extinction”.

While he is reportedly investigating the feasibility of sourcing bluefin tuna from farms in Australia, Nobu is also looking closer to home for inspiration, namely, the fish markets at Varkiza and in central Athens. “The fish here is great: very fresh, good quality” he enthused. “Now there are no excuses for the kitchen staff: they can’t say they can’t find something, because I know you can get anything you want!”.

While he was wandering the puddled aisles of the Athinas Street fish market, a fishmonger popped out from behind his scaled treasures and asked, “Are you Mr Matsuhisa? Welcome to our market”. “It was fun!” smiled Nobu. Just as Madonna said.