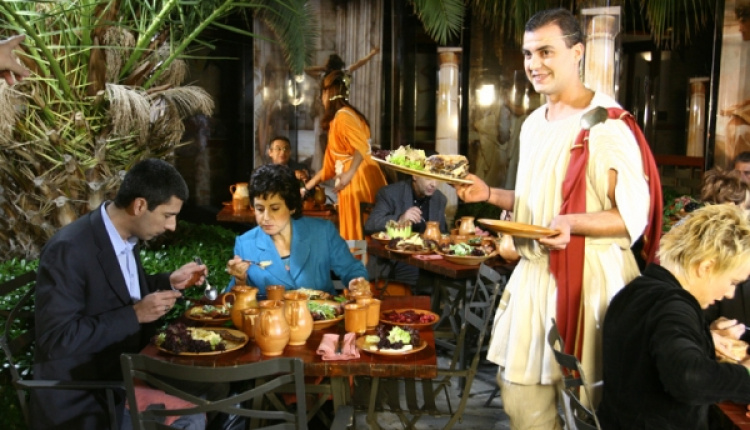 The epicurean owners of "Ancient Flavors" combed through texts and archaeological records in an effort to re-create foods eaten in antiquity—not to mention how they were eaten, with spoon and knife only. Dishes like pancetta seasoned with thyme, stuffed piglet (which must be specially ordered two days before), and squid cooked in its ink prove, if anything, the continuity between ancient and modern Greek cuisine. There's an undeniable kitsch factor in the setting: in a torch-lighted garden, waiters in flowing chitons serve diners reclining on couches. But Greeks and foreign visitors alike flock here to discover the culinary pleasures of the ancients, not to forget the divinely cool and leafy garden during the summer months.

Archeon Gefsis serves dishes based on original ancient recipes proved by studies to have high nutritional value and healing powers.

So, if you order black olives with cream cheese as a starterm you have an ally in the battle against respiratory infections, while if you ask for the popular creokakkabos (pieces of meat with sweet sauce made of honey, thyme and vinegar served with chickpea puree) you enhance your lucidity with a dish that has antimicrobiotic and antibiotic powers!

Traditional Greek cuisine has been scientifically acknowledged to be the best model of nutrition in the world. Even better was ancient Greek cuisine, since it was rich in cereal and dairy products, vegetables, fruit and oil. In particular, ancient Greek cuisine features the usage of honey, which people would often mix with cereals and eat in the form of oatmeal, fruit and vegetables, olive oil, watered down wine, meat, cobs, wine pairing appetizers, legumes such as lentils and chickpeas, barley rusks, desserts like syrup desserts and honey pies, salads, souvlaki and so on. Food was usually either roasted or boiled and often spiced. And let us not forget that food is what ancient Greeks would offer to their gods (meat, fruit, honey pies, etc.).

Being rich in antioxidotic and natural anti-inflammatory elements such as vitamins A, C and E, Greek cuisine provides protection not only against cancer but also against arteriosclerosis.

Finally, a major part of Greek cuisine is from dairy products which provide protection against osteoporosis and supply the body with nutritional ingredients. A good example of this is Feta cheese which tastes delicious and is, at the same time, low in fat.