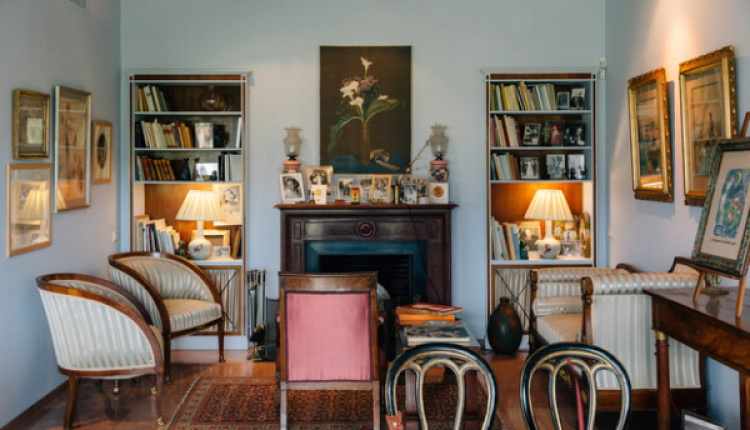 Visiting folk museums that present how houses and other spaces were set up in the past can be a fascinating experience, but during one’s visit, it’s hard to forget one is in a museum.

One of the key charms of the Katakouzenos House Museum (KHM) is that it almost feels still lived in. The 300m sq apartment on Vas. Amalias Ave is filled with impressive and highly elegant furnishings, books, and paintings by the likes of Chagall, who was one of the illustrious and globally famous friends of the owners. It is a cultural gem on the 4th floor looking out to the Parliament Building that still, not enough people know about.

The KHM was once the private residence of acclaimed psychiatrist Angelos Katakouzenos and his intellectually pioneering wife Leto, who belonged to the cultural elite of Europe’s so-called “1930s generation,” and were cultural ambassadors of Greece abroad and arbiters of international tendencies in Greece.

When she was a young woman, the museum’s director Sophia Peloponnisiou, connected with Leto Katakouzenou during the last decades of her life.

They developed a close and loyal friendship during which Peloponissiou made her dedication to her friend’s cultural visions a priority, offering her time and efforts in helping her publish her autobiography, soon published in its fifth version, and helping to organize cultural initiatives. Following Leto Katakouzenos’s death, the young woman discovered that she had been assigned the honor of continuing the pair’s cultural vision by keeping the apartment and its legacy ‘alive’.

Hosting a year-round series of cultural events such as talks, music and theatre performances, readings, and screenings, the KHM contains an extensive collection of over 40 paintings, some drawings, and prints, numerous works of art (decorative objects, sculptures), paintings in various media from the 1930s-1970s and a quality collection of 18th and 19th C. French and Hellenic furniture. The series of paintings includes a set of four large mahogany doors especially painted for the Katakouzenoi by their close friend Nikos Chatzekyriakos-Gkikas and many more paintings by the same artist in various media.

Further works by Spyros Vasileiou, Giannis Tsarouches, Giorgos Gounaropoulos (all prominent artists of the “1930s generation”) are hung all over the house. The watercolor and pastel portrait of Leto by Marc Chagall is perhaps the best work of art by a non-Hellene artist. “What makes the KHM collection of paintings quite unique, apart from their undoubted artistic and monetary value, is the way they were acquisitioned” notes Peloponissiou. “None of the works was purchased; indeed most were given by the artists themselves as gifts, tokens of friendship or gratitude.”