Feta with the Queen - Review 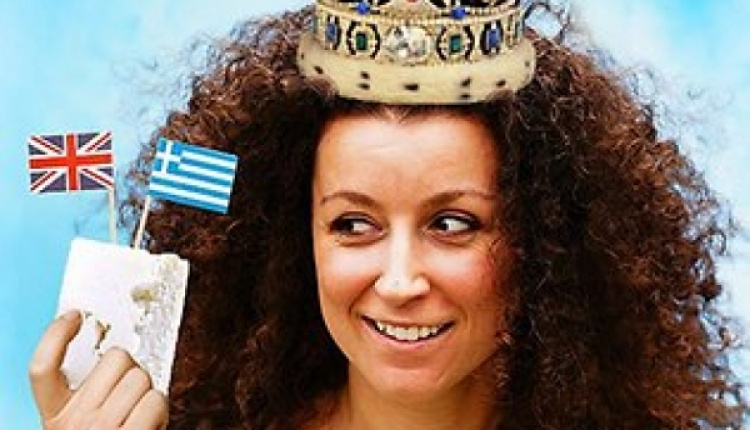 It can’t be easy. Performing a 60-minute stand-up comedy routine that’s loaded with the f-bomb and includes the miming of sex acts with members of the Royal Family ... with your Greek father sitting right in the front row. If that doesn’t sound like your typical Greek family set-up, that’s because the extraordinary force of nature that is Katerina Vrana is clearly far from your typical Greek daughter (despite what she’d have us believe!).

And very far from your typical female comedian.

Female comics do have a tendency to polarize audiences along gender lines. But after attending Vrana’s utterly brilliant sell-out show Feta with the Queen at Athens Art Links on Saturday night, I can attest that every male I talked to afterwards was just as won over as us ladies.

Since it debuted in 2013, Feta has been wildly successful – selling out in venues such as London, Athens (where Vrana has done a previous season), Melbourne and Edinburgh.

Happily, Vrana fans – and those who missed the Art Links performance - still have the opportunity to see the lady with the “crazy exploding volcano hair” again tonight for her final Art Links performance in Greek. Then again at Theatro 104 in Gazi, where she will shortly kick off a second Athens season of weekly performances of Feta with the Queen.

So what can you expect from Feta?

Cultural stereotypes. Lots of cultural stereotypes. The show is basically a one-hour “compare and contrast” of Vrana’s experiences as a Greek born-and-bred woman living in the UK: How much the Brits do love a good cuppa. How the quintessential English drizzle is the “Hugh Grant of rain”. Why attempting to queue-jump will never go down well in Old Blighty. And how unbelievably vexatious those bloody taps are to most foreigners. (Oh and her chronic case of the hots for Prince Harry.)

That kind of thing.

Initially, when I’d read about Feta, I’d been worried that such “been there, done that” cultural truisms might all come over a little tired.

But Hell no. Vrana is edgy, precociously intelligent and very “street”. She has a romping free-range talent for both mimicry and observational detail, and in her incredibly skilled hands, those classic stereotypes feel like born-again comedy virgins that you’re hearing for the ve-ry first time.

Naturally, the Greeks get their turn too: The typical encounter with “Smoking Guy” in a Greek tax office. What happens when you won’t let a Greek pay the bill. The size of your averagely “modest” Greek wedding. And of course, the “delicate” art of conflict resolution Greek-style.

On the night we went, Vrana also widened her net to take on Canadians, Germans (of course), Los Angelenos, Australians and Indians (her impression of their toilets and accents provided one of the most howlingly funny moments of the show).

It’s easy to see why this comedian names Eddie Murphy as an early influencer. Just like Murphy, Vrana’s delivery is as fast and furious as a Browning semi-automatic and similarly peppered with expletives. While she veers away from political satire, clearly Vrana is also very politically astute. Evident too are her considerable acting skills. Her account of auditioning for the Hollywood blockbuster Troy and not making the grade because she wasn’t “Greek enough” will have you near tears.

But perhaps Vrana’s finest achievement is how she apparently manages to fling all these “bad to the bone” cultural observations around all night – without causing offence to anyone (my lovely Indian friend in the same row was laughing harder than most).

Besides, at their basic core, cultural stereotypes are hilarious (as Vrana herself reminds us frequently). They’re hilarious because they are so bloody true.

If I had one minor criticism, it would be about the mood shift of Vrana’s closing sketch playing teacher to a kindergarten filled with international representatives. It was conspicuously more political than the rest of the show and for me, hit a somewhat discordant note.

But as one good mate said (a mate who nearly deafened me guffawing so much on Saturday night):

“The fact that so many of her characters, stories and observations come to mind two days afterwards and that I'm still laughing about them is testament to her skill. She’s the best female comedian I've ever seen. And I hope she does marry Harry!”

Another good pal, who admits to now having a stonking great girl crush on Vrana, wants to invite the comedian along on our next big girls’ night out.

It’s true. Katerina Vrana is that smart, sassy and borderline reckless friend you really want to hang out with at Happy Hour.

Katerina, your crown is waiting! (and incidentally, her dad loved the show!)