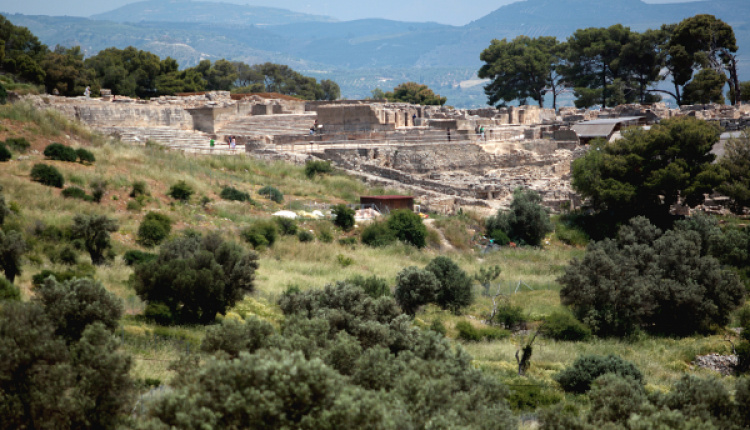 The magnificent archaeological site of Phaistos where an imposing palace stood overlooking the Mediterranean for thousands of years is perhaps not as well known as the palace of Knossos, but it was a focal point in the long and illustrious history of Crete.

It is the second-largest Cretan palace founded by the legendary King Minos of Knossos, but it does not face the Peloponnese mainland like Kydonia does, but rather southward and outward, toward the Mediterranean.

The palatial fortress, located in a seismically active zone, was rebuilt twice after it was first constructed in the Late Bronze Age.

Later, the palatial city, which archaeologists believe was a dependency of Knossos, was tragically destroyed a third time by the nearby Minoan people known as the Gortynians.

Phaistos site of Minoan-era palace with rooms made of alabaster

Located 62 km from Heraklion, Crete, the Bronze Age site lies on the outskirts of the modern-day city of Faistos. Unlike the more well-known and visited site of Knossos, which sees many thousands of visitors every year, Phaistos is more difficult to reach, accessed by grand stairs; but its mountain fastness, with its commanding views over the Mediterranean, is especially impressive because of its location.

The grand staircases at Phaistos hint at its former grandeur. There is evidence of an amphitheater, and basins used for religious rituals still dot the site. Visitors to Phaistos can still take in the views from its courtyards and terraces. A closer look at its ruins reveals reconstruction repairs over the three phases of destruction, while the tombs of rulers are located a respectful distance from the palaces.

The Bronze Age ruins of Phaistos were first described in the modern era by Thomas Abel Brimage Spratt, as part of the Mediterranean Survey of 1853, which included the topography, settlements, and monuments of Crete. But of course, the once-elegant city was well known by the ancients; the Greek geographer Strabo, who lived from 64 BC to 24 AD, stated: “Of the three cities that were united under one metropolis by Minos, the third, which was Phaestus, was razed to the ground by the Gortynians; it is sixty stadia distant from Gortyn, twenty from the sea, and forty from the seaport Matalum; and the country is held by those who razed it.”

Spratt and his crew found homes at the site that have since been removed, as well as the fortification walls of the palatial city.Federico Halbherr later began to uncover the remains of an extensive palace complex at Phaistos.

Pottery unearthed at Phaistos dates back to the Middle and Late Minoan periods, including polychrome items and embossing in imitation of metal work. Bronze Age works from Phaistos include bridge-spouted bowls, eggshell cups, tall jars, and large pithoi.

The levels of the theater area, flanked by two splendid staircases, made for a grand entrance to the main hall of the propylaea through tall doors. A twin gate led directly to the central courtyard through a wide street.

The upper floors of the west sector had spacious ceremonial rooms, although their exact restoration has not been possible.

One of the most remarkable artifacts in Greek history was found at Phaistos in 1908, when Luigi Pernier, an Italian archaeologist and academic working with the Italian School of Archaeology in Athens discovered the Phaistos Disc in a basement in the northernmost ruins of the palace complex.

The disc features symbols stamped in clay; measuring 15 cm, its hieroglyphic script has been dated to between 1950 and 1400 BC. One of the most striking displays at the Heraklion Archaeological Museum, its 241 tokens with 45 symbols, or characters, are arranged in a clockwise spiral. One guess is that it is a recording of military or hunting exploits. However, most academic attempts to decipher a syllabary or logogram for the Disc have had disappointing results; it is generally agreed that more examples are needed to break its code.

To read this article in full and discover more interesting facts about Phaistos, please visit: greekreporter.com