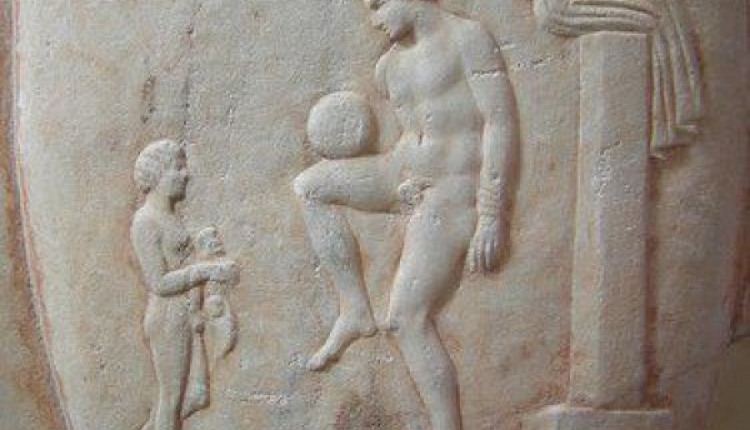 A long, long time ago, before there was football, there was episkyros, an ancient Greek ball game. Highly team-work oriented, the game was played with one ball, between two teams each consisting of around 12 to 14 players.

The field was marked with a central white line called the ‘skyros’ dividing the two teams, and another white line behind each team to mark the ends of the field. In the game, which was often quite violent, particularly in Sparta, each team would attempt to throw the ball over the heads of the opposing team. The objective of the game was to play until one team was forced behind the line at their end, with agility and speed being a player’s most useful skills.

However, it wasn’t easy as it sounds as players had to pass within their own team several times whilst also evading the defenders from the other team before they were able to toss the ball over the opponent’s line. If a team had possession of the ball on their own line, defenders could gang tackle him back over the line for a point.

A very similar game to episkyros was phaininda, which takes its name from Phaenides, who first invented it, or derived from the Greek word ‘phenakiein’ (to deceive) because the players would show the ball to one man but then throw it to another, contrary to expectation.

These Greek games of episkyros and phaininda were later adopted by the Romans.

FIFA has acknowledged the ancient Greek game of episkyros as an ancient version of modern-day rugby league.

“ The Greek Episkyros – of which few concrete details survive – was much livelier, as was the Roman Harpastum. ” FIFA.com explains.

A vase on display at the National Archaeological Museum, Athens shows a depiction of a young Greek athlete, balancing a ball on his thigh. It is this same vase that inspired the design of today’s European Cup football trophy.