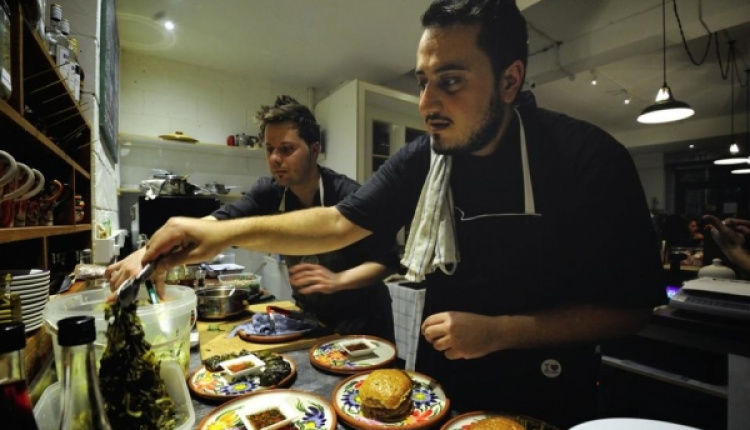 Ever wondered what Odysseus ate on his long journey back to his native Ithaca or what bread made from a 2,500-year-old recipe might taste like? The flavors of the ancient Greek world are being rekindled in London at the moment, in pop-up dining fashion.

Prepared by The Philosopher’s Stove team, the meals are based on recipes found in ancient manuscripts or fusions of old and contemporary culinary traditions. The ad hoc dinners began in May this year, with an emphasis on venues located in the British capital’s northeast.

“Given that we cannot re-enact the ancient Greek flavor palette, our project is an attempt to interpret the recipes through today’s contemporary reality, based on our own flavor horizon,” noted Stathis Georgiadis, a historian and co-founder of The Philosopher’s Stove. “We try to be as faithful as possible to recipes and references we come across to during our research, always working with the ingredients used back then. The feedback we get from those tasting our dishes is that the food is tasty, special and kind of off-the-beaten-culinary track.”

So far diners have been savoring a collection of antiquity-inspired dishes, including Dionysus’ Finger Food, a platter of vine leaves stuffed with minced pork and fried shrimps in a sour honey dipping sauce, Circe’s Pig, triple smoked pork cooked in wine, white grape juice, honey and spices – a recipe found in a papyrus at ancient Oxyrhynchus – and Cicero’s Burger, a vegetarian mix of chickpeas, walnuts, onions and spices, served with a smoked yogurt sauce and fresh coriander.
Ancient Greek poet Archestratus is widely considered to have laid the foundations for the art of gastronomy in 4th century BC Syracuse. His culinary laws included the use of quality ingredients in harmonious combinations, light sauces and a touch of spice.

The culinary spine of ancient Greek nutrition, says Georgiadis, was based on cereals, bread, fish, dairy products, cheese, eggs, honey, legumes and certain fruits – at the banquet table these were frequently accompanied by watered wine.

Have contemporary Greeks kept anything from the nutritional teachings of their ancestors?

“They certainly have. Above all, the high quality of raw materials produced on Greek soil and the purity of a number of ingredients which are intrinsically linked to Greek cuisine, such as olive oil,” noted Georgiadis. “It’s also about a certain balance and a sense of gastronomic wealth – this kind of cuisine includes almost everything. Another major factor is the notion of gathering around a table as a means of socialization. The way we get together to eat and share our food, the transformation of ancient Greek symposia, and their importance for individuals and society as a whole.”