White Sculptures Of Parthenon Were Colourful 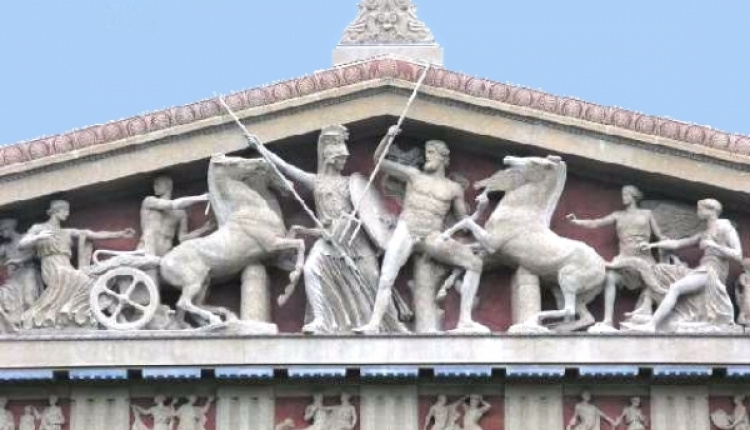 In a new analysis, scientists have confirmed that the sculptures on the triangular gables of the Parthenon temple in Athens, which are pristine white, were originally brightly painted. According to a report in Nature News, conservation scientists at the British Museum in London used a non-invasive technique to reveal invisible traces of an ancient pigment known as Egyptian blue.

The team says that this is the first definitive evidence that the two-metre-high sculptures were not pristine white, as they appear today, but were precisely painted, as most sculptures from antiquity once were.

The pigment, which was widely used until 800 AD, was identified on sculptures that formed parts of the decorated east and west ends of the Parthenon temple.

It has been known for more than two centuries that the Ancient Greeks and Romans painted their statues.

That paint has almost completely disappeared over time, although tiny flecks can be found on most statues on close inspection.

Unusually, no trace of paint has ever been found on the Parthenon sculptures, despite thorough analysis, including a full investigation by the renowned British physicist Michael Faraday in the 1830s.

Giovanni Verri, a physicist in the museum's department of conservation and scientific research, developed a technique to exploit the fact that Egyptian blue emits near-infrared radiation when excited by visible light.

His portable detector comprises a light-emitting diode that beams red light onto the surface being examined, and a camera that can detect the infrared light emitted by the pigment particles.

"The distribution of the pigment is also a key issue in proving that the sculptures were painted," said Verri.

For example, the pigment found on the winged messenger goddess Iris traces just the belt restraining her billowing tunic, and nowhere else on the figure.

Greek conservators have recently observed greenish flecks on remnants of the Parthenon frieze that are in Athens, but have not reported analyses of them.

"We informed our Greek colleagues of what we found and they responded warmly, saying they are interested to examine these flecks themselves," said Verri.

"I always believed the frieze must have been painted," said Ian Jenkins, senior curator in the British Museum's Department of Greece and Rome. "This new method leaves no room for doubt," he added.

According to Verri, these frieze flecks could also be Egyptian blue, and is keen to examine them with his portable detector.