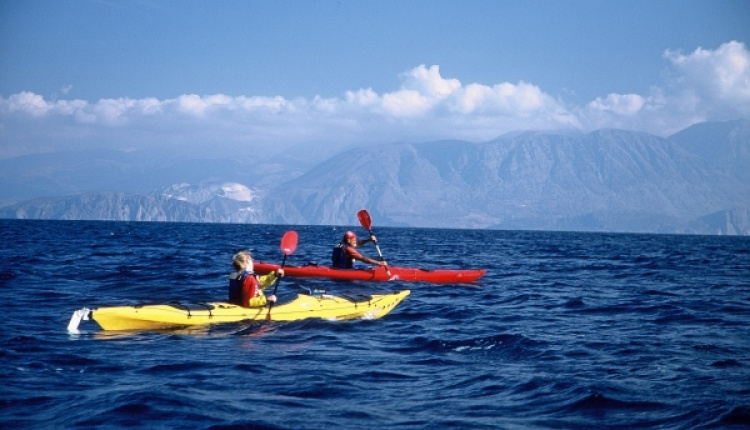 Standing on the seashore of Plaka, a hamlet 16 kilometers north of Agio Nikolaos in eastern Crete, the island of Spinalonga looks invitingly close.  Just a hop, skip and a jump away by sea kayak—or so it seemed. Spinalonga is a spit of land situated at the mouth of Spinalonga Bay.

Strategic since antiquity, in 1579 the Venetians erected a gargantuan fortress befitting of their superpower status, and indeed, its protectors defied Turkish conquest for several decades longer than any other Cretan garrison.  The fort finally fell to Ottoman rule in 1715.

On a warm October day our cozy group of four Americans and four Greeks planned to kayak over to Spinalonga Island.  From there, we would head down its bay, a short portage, then down Poros Bay to Agio Nikolaos.  At most, the trip was fifteen kilometers.

From Plaka, a local fisherman can probably make the voyage to Spinalonga Island in about twenty minutes.  It took my best friend Pia and me about two hours.

Pia and I had never kayaked.  Our initial hour was spent on land just trying to get a grasp of this sport and its paraphernalia.  We donned life jackets, colorful wetsuits and learned how to put on a “kayak skirt.”  This is a sturdy cloth worn around your waist: when seated in your kayak, you attach the skirt’s hem to the open perimeter of your seat so that water doesn’t enter the boat.  Next were some rudimentary rowing lessons.  We sat on the beach, pretending we were at sea, and went through the motions of manipulating the paddles.

Pia and I reasoned that, being first-time kayakers, we should operate the two-seater.  Wrong. We didn’t know when to paddle, how to coordinate our rowing or even which direction to face when a strong wind blew.  Not but fifteen minutes after setting out to sea, one moment we were dry, the next moment we were wet.   The boat capsized so suddenly we didn’t even have a chance to shout the proverbial “Man Overboard!”   Sobered by the incident, we took our friends’ advice and got our own kayaks, and discovered that individual navigation was superior to teamwork, at least when the team was clueless in the art of kayaking.

When we arrived to Spinalonga Island some of us were quite wet and all of us looked a little goofy in our loudly colored kayak mini-skirts. The tourists stared, mostly at Miltos.  While our skirts laid flat, his undulated with a flamboyant pink hem akin to an Argentine tango costume that got shrunk at the cleaners.  For some reason, he kept it on during our entire visit to Spinalonga which prompted endless guffawing.

After Crete formally united with Greece in 1913, Spinalonga became a leper colony and remained so until 1957.  The island is larger than expected when you peer at it from the Crete mainland. One can easily spend several hours strolling its pathways and perimeters. The elegant Venetian architecture—curved arched portals, for example—contributes to Spinalonga’s beauty, yet a haunting feeling pervades,perhaps attributable to the cemetery whose open graves bear the assumingly impaired bones of the prior inhabitants.

My afternoon kayaking was far more successful once I got the hang of it. And the disappearance of the winds helped appreciably.  Our group soared along pretty much all together instead of scattered leagues apart as we had been during the morning. The scenery in Spinalonga Bay is breathtakingly spectacular -- mountains in the distance on a blinding shiny blue sea devoid of any other seafarers except the eight of us.  The rock cliffs on the coast mesmerized me: they were wavy, in layers, like slabs of thick uncooked bacon stacked on top of one another, truly of postcard caliber.  One area we paddled to was peculiar as it felt sheltered like inside a cave but actually we were in an open area on the sea.

If you are inclined towards a little physical activity while vacationing, I heartily recommend sea kayaking in Spinalonga Bay.  Beginners can complete the journey from Plaka to Agio Nikalao, with a pit stop on the island, easily in one day.  By the end of your adventure, you will feel exhilarated by the aquatic workout and gain yet another reason to place Crete high on your list of magnificent Mediterranean islands.