Cycling On The Island Of Gavdos 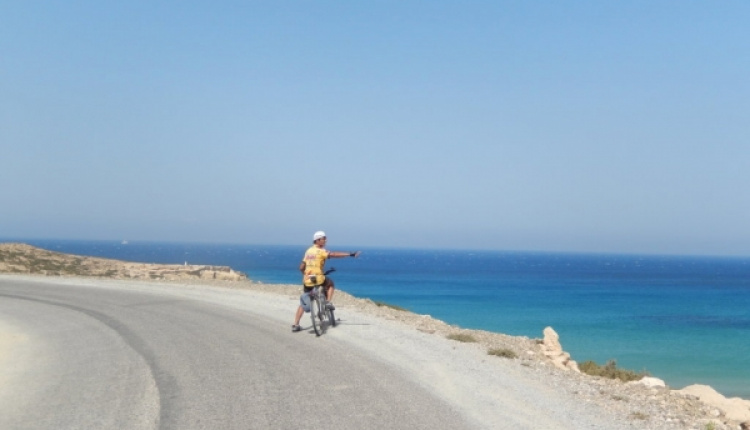 Where is the most southern chunk of real estate in all Europe?   Not Rhodes or Malta or Crete, and certainly not Sicily.   To stand on the farthest south land in Europe you must make your way to the island of Gavdos, 170 nautical miles from Africa to the north and 22 nautical miles south of Crete’s feistiest region, Sfakia. “Oh my, it’s hot.”  Those were my first words when I got off the boat.

Admittedly, we landed at one in the afternoon, but still, I had just spent several days cycling from morning to dusk in Crete, so even though I was accustomed to a mid-day sun, Gavdos was of another order.

The island is only ten kilometers long and five kilometers wide which makes it bikeable in its entirety in less than a day.   The heat and hills probably account for why I didn’t see a single biker during my brief three-day sojourn.   Many people walk where they need to go on the well maintained network of paths.

As of September 2014, Gavdos has no hotels, no banks, no ATMs, no post office, no nightclubs, no full time resident doctors.  There is a heliport.  There is one policeman for the 100 or so residents.  I heard his car siren blare when he picked up his daughter from school.   In the 1930s Communist political prisoners were exiled to Gavdos.

I stayed at Sarakinika, the beautiful beach settlement (it can’t possibly qualify as a village) where visitors can rent a smattering of rooms and eat in about a half dozen tavernas, some with wi-fi.  Most folks like myself camped in tents in the coastal dunes amidst the pines trees and Juniperus shrubs less than a minute’s walk to the sea.  I bathed in a rigged up shower on the beach with no curtains but no matter because nudity doesn’t raise eyebrows.   My second shot at bathing was a bust because there was no water in Sarakinika which I’m told happens regularly.

As you may have guessed, many of the residents are hippies in retreat.  I met Vasilis whose tall frame and long narrow beard evoked what I imagine Pythagoras to have looked like.  Vasilis has lived on Gavdos in a tent for fifteen months.  I guess he has had a full social calendar because he hasn’t even made it to Trypiti yet, which was the highlight of my visit.  I met Antonio from Portugal who epitomized the permanent nomad with his tattoo sleeve and plugs in both ears the size of a one euro coin.   His purpose in life seemed to be moving from one outdoor summer music festival to the next.

I wanted to sit on The Throne in Trypiti.  This beach is the most southern point on Gavdos island.   Where the gravel road stops is a path that takes thirty minutes walk downhill to reach Trypiti.  At the beach’s most southern tip is a giant chair that faces north towards Europe.  The local Russians built the chair and made the path.  Their small community began with a nuclear physicist fleeing Chernobyl.  They are scientifically attuned to ecological ways to live and they trade their skills for food and other needs.   The locals appreciate them and their presence adds to the mystique and allure of Gavdos.

You’ve really got to have a low footprint to visit Gavdos.   This is not a place for those expecting mints on their pillow, a pile of ice cubes for your ouzo or to buy a new pair of sunglasses.  Gavdos is raw.    It is a place where the nymph Kalypso is said to have imprisoned the shipwrecked Odysseus holding him as her lover.   I suspect Gavdos has had its share of modern-day Kalypso and Odysseus wannabes.