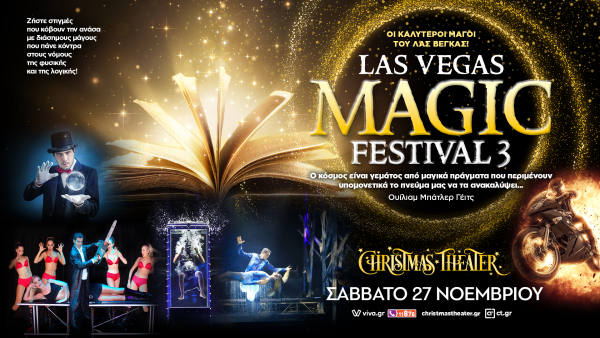 Our world is filled with magic!

Since the 19th century the art of magic has been entertaining people making it famous and popular all over the world. Houdini and other famous magicians of the time laid the foundations of the so called today "Magic Shows", which they retained their popularity during the television era, where magicians such as David Copperfield and David Blaine managed to modernize its art form.

For the past two years, the Christmas Theater has been hosting the "Las Vegas Magic Festival", a show that presents renowned award-winning magicians every year, with impressive performance.

So it's now time for another unique experience as  "The Las Vegas Magic Festival" is returning to Athens!

Reserve your seats and get the chance to see five of the best modern alchemists of our time, in a unique show filled breathtaking momments that defy logic and the laws of physics!